They're big. They're very bad. And they definitely pack a punch. If you can call it that when they just wiped out your entire fleet, everything you had anchored in orbit and licked the sweet tears from your face to boot! The Titans are here!

Its been a while since the last update, and while its not necessary to go into details, lets just say that I have experienced some technical difficulties which considerably slowed down my work on the mod. But, all this is about to change as the Episode I slowly draws to final stages of production!
Soon you will be fighting desperate battles against the encroaching Xin, or wreaking havoc across the galaxy while doing your best evil laugh imitation (optional)!

To tide you over until the next teaser trailer showing the ingame action in all its glory, here is a bit of information on the mod's biggest ship class - the Titan. 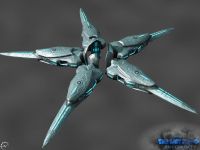 A Titan class ship is the most powerful unit a player can build in the Last Stand. The requirements are enormous, from research costs and time to actual building times and resource needs. They easily dwarf Entrenchment starbases in production costs, but on a plus side, a Titan can eat a starbase for breakfast, then burp flaming debris to incinerate the planet below. Proverbially speaking.

Each new faction, the Xin, the Clans Remnant, and the Hegemony will have one Titan class ship available via research, each having a unique approach to combat and utility. The Leviathan, the Xin equivalent, is built for one purpose only - to wipe out the enemy as quickly and decisively as possible.

Built from five separate modules, each larger than even the largest Xin battleship and easily dwarfing even smaller ships like TEC or Vasari battleships, the Leviathan is an immensely tough behemoth, designed to wade into the thick of action and detonate its most powerful weapon, an artificially created and maintained black hole.

Possibly the only machine in the known universe which can create and maintain a phenomenon of such awesome potential, little is known about the actual methods by which a Leviathan can maintain a full-fledged black hole in the narrow space at the center of its superstructure without instantly collapsing under the enormous gravitational pressure. The five identical modules are themselves autonomous, held in place relative to each other by the same forces they help put into being. In fact, it is speculated that the sole purpose of the modules is to provide the platform for whatever mysterious machinery controls the black hole.

Being so large, the Xin Titan does not have effective ship-to-ship weaponry. Instead, it relies on massive hordes of various assault and defense drones to provide point defense emerging from its ten enormous hangars, each of which could easily accomodate a cruiser or two. While this makes the large ship vulnerable to well prepared fleets which carry a lot of weaponry dedicated to taking out the drones, its most valuable ability lies in the fact that it can "excite" the black hole it maintains, creating massive assymetric gravity surges which not only suck all free-floating objects towards the gargantuan ship, but also obliterate any objects which stray too close, making the Leviathan potentially capable of wiping out an entire sector completely.

But, such awesome power takes time to unleash. It takes approximately six minutes to create a powerful shockwave guaranteed to wipe out the entire sector. While the minor shockwaves emanating from the tormented space-time in the center of the structure are potentially deadly to any ship, a determined fleet has an option to try and take out the behemoth before it can obliterate them - a timed race with only one possible winner.

Ultimately, your best bet is never to let your opponent build a Titan. Because if you do find yourself squaring off against one of these, you better come prepared and then some. When fighting a Titan, there is no room for second tries.

Hah, You did the right thing by making small GOOD mods b4 you made this 1, you have experience, and people know they can trust your work, so, im tracking, and i think this looks great, Dont let us down ;)

I've been following this mod for a while now, and I must say... It looks fantastic, and only seems to get better. The backstory was very nice, as well. I had two questions for you, though. First: Will this mod be able to play with mods that add planet types? Such as the Celestial Bodies Mod? Or will there be compatibility issues? Second: Do you take donations? Because I would feel bad NOT paying for this.

The Last Stand will feature an expanded list of planet types, including the all time favorites such as city worlds, tropical planets, gaia worlds and so on.

In addition to that, using the Entrenchment's mod management it will be possible to combine the Last Stand with other favourite mods of yours, as long as they do not conflict with the core changes the Last Stand implements (such as the rebalanced vanilla units for dynamic combat system). Or do it manually for the vanilla Sins version.

Donations... well I feel obliged to thank you for even considering it! :) That said, while of course every mod I make will be completely free, generous individuals will be able to donate via the main site which will soon go online and thus help the effort and logistics tied to it. Keep watch here for the upcoming news and links! And thanks again. :)

Excellent, I will try to send something your way once the main site goes up.

when will there be a play able version of this? the wait is killing me

Tokage, you know the standard answer - when its done. ;)
The ships are done, I'm working on structures right now, as well as polishing and rigging the units ingame... I still need to do the abilites and tech trees, after which a beta version should be release ready.

What about phase jump animations, will they be enlarged or an enlarged one solely for the titans?

Ah well... not really. You can't define jump animation on a ship basis, so I'm afraid its gonna be one of those little "holes" in the mod design.

Explosion is going to be suitably spectacular though. ;)

This is everything I wanted!! when I went looking for mods i only wanted an addon the existing races. I wish I could help you beta test and maybe try to make some ship models... Most importantly I was wondering would this add Titan class ships for all the races? I can also draw concepts as well.