Sorry for the super long wait between news updates, it's just been real hectic over here at Ham and Jam. Lots of changes with the team members lives has left precious little time to spend working on the mod, but fear not as we're still pumping out work even if this update shows little of it unfortunately. It's true what they say, the final 10% of any project is the hardest 10% and we've certainly hit that here at Ham and Jam. There is no doubt we are in the final phase of production before rele

1) The bulk of the work on the mod is done, what's left is minor...but a lot of minor stuff makes a major stepping stone.
2) We have come too far to let anything stop us now.

Work on the mod toils on through the long Summer nights here at Ham and Jam and slowly but surely we're getting there. Every day more and more bugs are quashed and more and more features are added. The stuff left to do is trivial compared to the rest, yet without it the mod feels incomplete and unreleasable. 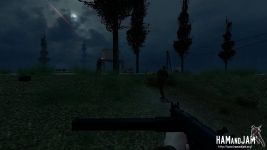 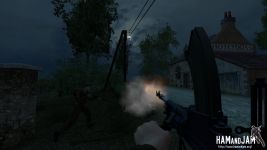 To help us through these long nights we really do need some extra team members, without them everything takes ten times as long as it should. If you're one of the below then please get in contact:

No joke, if we had one of each of the above, giving us 4 hours work a week we wouldn't be sat here talking what if's, we'd be slugging it out ingame! The one thing thats holding us back is the lack of weapon textures. If we had a reliable guy doing them we'd hazard a guess that within 2 months we'd all be playing. 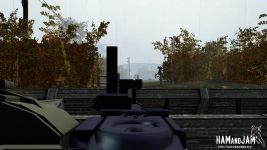 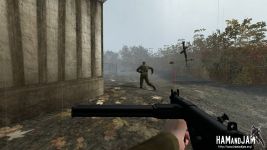 Without your help this last 10 percent could drag on much longer than needs be. We've had many people promise us work but many fail to deliver. At time's we think we're cursed! We will bring on Person X to do job X and Y, and within a day/week/month their hard-drive dies/they break their arms/lose their job/move house/vanish without reason.

It's a shame and without the above incidents (all are allegedly true..) we would be almost certainly released and be sharing the mod with you. The only plus sides to this slow down in development is certain area's have managed to get really polished, such as the maps destined for release day and even the ones for the next update after that. Code wise SteveUK has also managed to jump on the time waiting for the visuals to be done and crank hard on getting us on the Orange Box engine. Whilst we may not release on it (EP1 is the current plan) the interval between engine updates should be substantially shorter.

Lastly I leave you with a short video, shot sometime ago and has been floating on YouTube for sneaky people to find. It documents one life of a player on Pegasus from spawn to death. There's bugs and errors in it naturally, but hopefully it shows you an insight into the level and I promise the next video won't be in the dark!

ah good the bits without the americans who we all know won the war on there own.good luck with this one looks good

Whoever thinks the war was only won by Americans is retarded. The massive D-Day invasion was planned by us yes, but the war was not won by us. Was won by the US, Russia, Great Britain, Canada (yes they were in here, Sword Beach)and more.

Good progress on the mod, can't wait to give a try :D

I think it was more of a failed attempt at sarcasm.

This guy is right! (Except Canadian landed on Juno :) ) Every one of the Allies played a huge role!

On another note it is great to hear your making good progress and I am looking forward to playing it when release! Heck, I'll try to bring as much as my INS clan as I can to play!

Ah so it was Juno, I'm sorry xD Not sure why I thought Sword, but it seemed right. Thanks :D

We couldn't have won the war without the Canadians help!

i kinda agree with you man, if it wasnt for america, we would all be speakin german! and also the russians helped alot too, canada really didnt do ****, i mean yeah they helped, but m sure we wouldve just as easily won the war without them, and england made a good bomb distractions for the germans, other then that, kinda useless.

No we wouldn't have had as easy a time without them as we did with them. They were a whole front on a beach, the point of the D-Day landing was a massive strike in multiple areas, one beach left standing would have meant a lot of things could have changed. The small things matter.

Like the bomb that could have killed Hitler, moved 2 feet away and it only injured him. (Had Von Stauffenburg actually put the 2nd explosive in the bag, it wouldn't have mattered.)

WW1, Hitler was 6 inches away from death by sniper, but it instead killed his friend.

Small things, no matter how insignificant, could have changed a lot in history. :P

Finally, a WWII game which isn't composed entirely of stereotypes and/or badass American soldiers who take bullets in the gut, bandage them up with the stars and stripes and keep going. *ahem*CallofDuty*cough* Keep up the good work, looks good.

nor 5, you got to play as Russians. And in 4 you played as a British SAS squad.

Yeah too bad in 5 you could only play as Russians and Americans, I wish they would have included another army..

If only they would have let you play as the Japanese or Germans.

"badass American soldiers who take bullets in the gut, bandage them up with the stars and stripes" hey... now that's not a bad idea! :p

looks awesome! im not sure if i saw in the vid, but when you kill someone, do you get notified? like will you know who you kill?

Kill notifications are in.

cant wait to play this my freind !!

Wow, looks great! Does this require DoD: Source or anything?

It's a Source mod, it requires a Source game. Asking if this requires DOD: Source in particular is like asking if Call of Duty requires Medal of Honor.

The answer is no, it doesn't not require DoD:Source. However it requires a Source engine game, which could be DoD:Source if I'm not mistaken, or Counter-Strike, HL2 or the Orange Box.

If you have any of those games or can currently play mods for HL2 then you're good to go.

Can't wait to play this guys!

That last video impressed me, great work. Looking foward to it.

Looks and sounds great! Keep up the good work.

Also, when, and if you have enough time, please make a SinglePlayer for this mod. It would be really great then.

There are no plans for a single player.

lol MastaGunZ you can't play as German or Japanese in any WWII game coz they lost the war, and ofc at the end of game you will have to lose too,and thats really not fun.

May I point you in the direction of Red Orchestra: Heroes of Stalingrad. It will be the first FPS game to contain a complete Axis power campaign (so they say). The Germans lost the war sure, but they didn't lose every battle within the war.