Corporations are going to play a big role in Aftermath and will have considerable sway over the political landscape. Writing about their background, motives and influences has been a joy, but has also required a considerable amount of research and planning. Aftermath will see the corporate plane become more competitive as underdogs rise and industry giants come into their prime. The prevalence of corporatism will also stoke the flames of piracy, terrorism and revolutionary movements. Ultimately what we’re aiming for is a real sense of tension that will resound through governments and give us a really exciting arena to play in. Here’s how some of the corporations of Aftermath will be shaking up the political landscape. 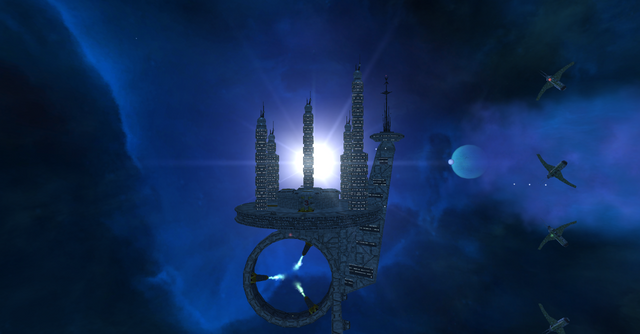 Samura Industries has a long history of growth and influence and is arguably the epitome of corporate greed in Freelancer. Aftermath will continue this paradigm to see Samura through to an apex of corporate supremacy. Samura will play the role of the manufacturing supergiant, professing in the mass production of cheap and affordable goods. By v1.0 their leverage in the Kusari government will be enormous. This will afford them unlimited breathing room in terms of strategy and expansion within Kusari and beyond its borders. Despite this, their age-old competitor Kishiro Technologies will remain impervious to Samura’s attempts to buy them out. Kishiro’s acceptance of a shipping contract with the GMG, undermining Samura’s plan to weaken them, also hasn’t done much to improve relations. But both corporations currently find themselves more preoccupied with foreign competitors to openly contest it. In particular, the revelation of valuable minerals in the Kepler system has commenced a new gold rush from both Kusari and Liberty. As a result, Samura has been pressuring the Kusari government to intervene.

While effectively a police faction, Liberty Police won’t be escaping the fact that they are indeed incorporated. For the keen eyed few who’ve taken a look at our timeline, the fifteen years between vanilla and Aftermath saw Liberty go through a long period of corporatism. Policies overwhelmingly in support of big business rolled through congress without remit, giving large corporations free reign to expand and conquer. LPI certainly gained from this and have been given almost complete discretion to exact law and order with limited oversight. Effectively unregulated and engorged on funding, LPI have been less concerned with keeping the peace than with generating a profit. Prisons continue to be filled beyond capacity and rumours of forced labour are beginning to surface. On top of this, their negligence has seen crime spiral out of control while they’ve fed the government with embellished and outright fabricated statistics. The house of cards finally comes tumbling down when a growing Xenos presence in Texas turns into an outright insurrection. LPI Sugarland is breached and many of it’s inmates bolster the Xenos’ ranks. LPI’s complacency is finally laid bare and the Liberty government is forced to send in the Navy.

Planetform Incorporated has been busy pursuing further business opportunities around the sector. After decades of delays and bureaucracy, terraforming operations on Atka are now underway. Their projects on Ayr and California Minor are also ticking over nicely, but Harris continues to plague their reputation as its atmosphere refuses to stabilise. Evidence of fraud and overreaching is beginning to mount. And several days prior to v1.0, Planetform’s CEO absconds. The general tone we aim to strike with planetform is a collective of honest albeit incompetent professionals led by bunch of rotten apples. As a company they will fit the typical fraudulent archetype whereby the facts picked up by the people on the ground are construed through management to resemble a profitable business strategy which is neatly packaged by the sales department to get governments to part with trillions of credits. This won’t be publicly known. But bits and pieces of Planetform’s lore will be dotted around the mod for players to piece together themselves. Ultimately Planetform will be a corporation you can proudly fly for as a pilot yet have some considerable fun RPing as corporate management.

Abfalllogistik und Anlagenkonstruktions AG, otherwise known as ALAK AG is a new faction we’ll be adding to the Freelancer universe. In reality they’re a new company formed from the merged assets of Kruger Minerals and ALG Waste Disposal. After the vanilla campaign, Rheinland left a bitter taste in the mouths of the other houses and suffered economically because of it. By v1.0 the economy in Rheinland will have bounced back to its former strength and this is partly credited to business partnerships forged by ALAK AG. At mod launch, ALAK AG will be the largest corporation in Rheinland. Specialising in mining, manufacturing and waste disposal and based at its headquarters at Dortmund Shipyard, its sights are now set on contracts long held by Daumann and Republican. But this stellar rise has been somewhat disrupted lately due to a political corruption scandal which has paid a significant blow to their brand and business.

The GMG is getting a complete lore overhaul to solidify their position as a massive influential power of the sector. Their boldest move yet has been to sever ties with Kusari by declaring their independence. This has been met with some resentment from Kusari who regard the fight against Rheinland in Sigma-13 as a rush to the guild’s defense. With no love lost with Rheinland, the guild now finds itself surrounded by less than cordial neighbors. And while Outcasts and Corsairs ramp up their raids of the Sigma systems, the GMG faces a test of survival: to prevail and prove their right to subsist alongside the other houses, or to crumble and be at the mercy of their rivals.