In Part One, I outlined a more general history of the Istari and introduced each of them except one: Gandalf. A detailed account of the Grey Wizard follows. 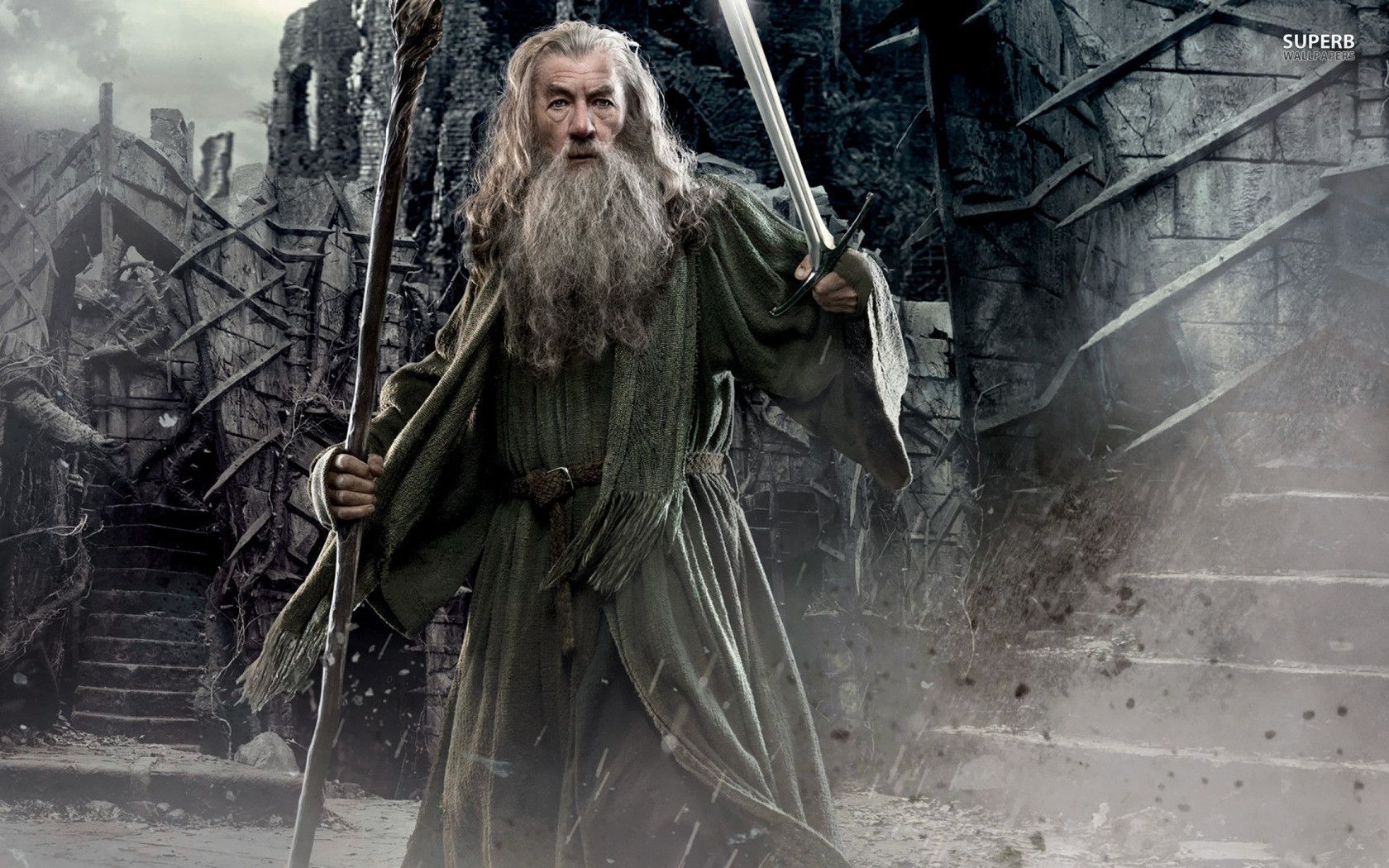 Of the five Maiar spirits chosen to go to Middle-Earth as one of the Istari, only Olorin stayed true to his mission. The Valar Manwe - who is considered to be the greatest of the Valar and their unofficial leader - chose him despite the Maiar's reservations that he was not up to the task. Olorin was very close to the Eldar who had remained in Valinor and Manwe believed him to be an ideal candidate for being tasked with the protection and assistance of Iluvatar's children. Though Olorin was higher in stature than the other Maiar, except for Curumo, he was the last to arrive at the Grey Havens.

His name was "High Elven" in nature. Although a literal translation of Olorin's name means "dream", to the Eldar it included the idea of "clear vision". One of the passages in Tolkien's notes states that Olorin was "clad in grey" in Valinor. His raiment remained so as his Istari incarnation. His name in the Common Tongue (or Westron) was Gandalf, meaning "Elf of the Wand". He was incorrectly deemed by Men to be of Elven-kind.

When he met Cirdan the Shipwright upon his arrival, the Elf recognized in Gandalf his great wisdom and humble nature. Welcoming him with reverence, Cirdan bestowed upon the wizard the Third Elven Ring, Narya, also known as the Ring of Fire. He told Gandalf:

"Great labours and perils lie before you, and lest your task prove too great and wearisome, take this Ring for your aid and comfort. It was entrusted to me only to keep secret, and here upon the West-shores it is idle; but I deem that in days ere long to come it should be in nobler hands than mine, that may wield it for the kindling of all hearts to courage."

Though Gandalf would keep the Ring secret until the end, Saruman somehow became aware of Cirdan's gift and it sparked a jealousy and resentment that the White Wizard would always harbor against him. Narya likely assisted Gandalf in his talent for creating the delightful marvel of his fireworks displays. The wizard's warm and eager spirit was also enhanced by the Ring of Fire and, as an enemy of Sauron, he contrasted "the fire that devours and wastes with the fire that kindles, and succours in wanhope and distress".

Among the Elves, he was known as Mithrandir (the "grey pilgrim"). Although this name was also used by the Men who were of Numenorean descent in Gondor, which Gandalf had visited as early as the year 1800 of the Third Age. He himself states in "The Lord of the Rings" that in the South he was called Icanus, but we are to assume this refers to lands farther south than Gondor's borders as of the end of the Third Age to which he may have journeyed in his early days. It may be a word or an adaptation of a word used by the Haradrim. The Dwarves referred to him as Tharkun, meaning "staff man". But the Dwarves of Thorin's company and Gimli used his Westron name, Gandalf.

The Eastern part of Middle-Earth was a land to which he did not, or would not, go. This adds to speculation about the fate of the Blue Wizards who never returned from the East. Did Gandalf have some knowledge of what had become of them? Tolkien makes no comments about this.

For two thousand years, he traveled throughout Middle-Earth. He lived in no specific place and befriended all who were in need. Other than the visual trickery of his fireworks, he displayed no special power. For he "desired not that any should hold him in awe or take his counsels out of fear". And it was his patience and kindness that allowed him to embrace the small race of hobbits, a simple folk who were largely overlooked by the rest of he peoples of Middle-Earth.

When Gandalf battled the Balrog in Moria, he was fighting a creature who was also Maiar in nature. It may only be the aid of Narya that gave him the advantage to destroy it. But in doing so, his physical form was broken. Through his sacrifice for the sake of the Fellowship, he was able to pass through time and space back to the realm of the Valar. This act of selflessness had the effect of increasing his Valinorean stature and, combined with the circumstances that diminished Saruman's, he was able to assume a role as the new head of the order. The Valar sent him back to complete his task as the new White Wizard or, as Gandalf said, "Saruman as he should have been". But, even in this greater form, he kept the "radiant flame" of his power vieled except when in great need.

When Sauron was destroyed, Gandalf was allowed to accompany the other Ring Bearers across the Sea. For his task was complete and a new Age of Men had dawned. Gandalf succeeded because he stayed true to his nature, to his mission and to those whose fate he had been entrusted. Highlighting a major theme of "The Lord of the Rings", he held on to hope even in the face of great danger and uncertainty. And he was rewarded accordingly.