The only reference to the wizards at the time that "The Lord of the Rings" was published was in Appendix B, which simply describes them as messengers sent to contest the power of Sauron. It mentions Saruman and Gandalf with one or two sentences in reference to Radagast and "others" who "do not come into this tale". True enough. Originally intended to be part of what became a rather lengthy index of "The Lord of the Rings", the essay included in this section never made it to print until "Unfinish 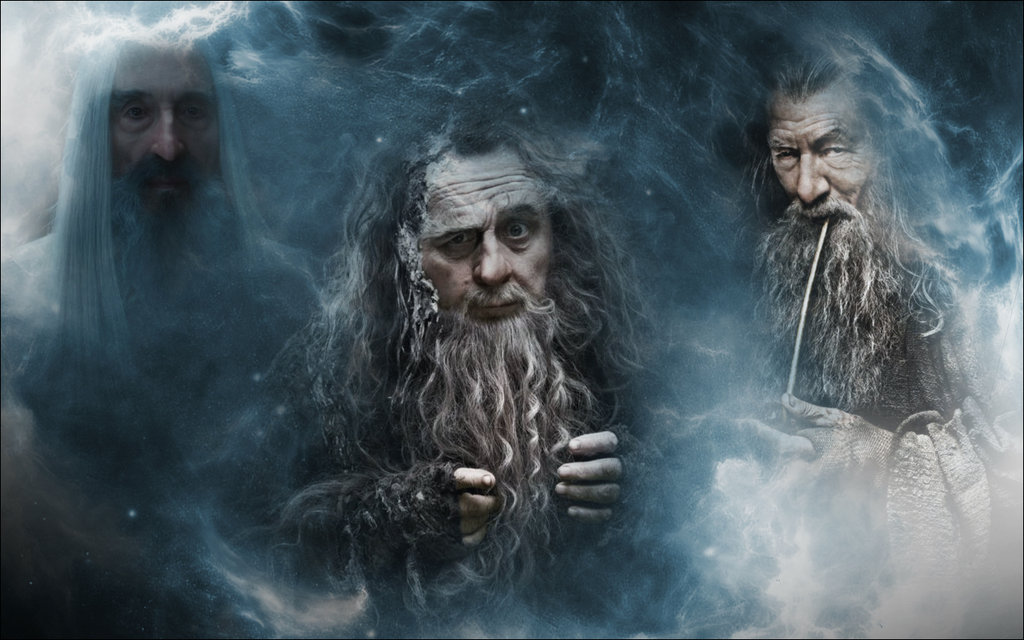 The Istari weren't wizards in the traditional sense made popular in European literature which was of human beings with magical powers. In the context of the etymology Tolkien created for Middle-Earth, he states:

"Wizard is a translation of the Quenya istar (Sindarin ithron): one of the members of an 'order' (as they called it), claiming to possess, and exhibiting, eminent knowledge of the history and nature of the World."

Another translation of Istar is "wise". And their wisdom came from the fact that they did have eminent knowledge of the world, for they existed in their true forms before the world was created. The Istari were physical forms of Maiar spirits of Valinor. The Maiar are the lesser immortals of the Ainur race of beings. If the Valar were comparable to "gods" then the Maiar could be thought of as being similar to "angels". Each Maiar was attached to the jurisdiction, or "people" as it were, of a specific Valar and shared their particular characteristics.

Just as there was a particular order of status among the Valar, the Maiar were also of varying rank and stature. Sauron was originally a mighty Maiar of the Valar Aule, but chose to follow Melkor (aka Morgoth) and became evil. Balrogs were also lesser Maiar who gravitated toward the Dark Power. The Valar assisted in the creation of Middle-Earth but the Elves and Men were created by Eru Iluvatar alone. The Valar were responsible for looking after the children of Iluvatar and during the First and Second Ages they were known to appear personally - in all their majesty - to Elves and Men to assist them in their struggles against evil.

Valar such as Ulmo, the lord of waters, and Orome, the hunter, appear in tales in "The Silmarillion". After the disaster of Numenor's destruction, however, the immortals were humbled and became wary of any more direct intervention into the affairs of Middle-Earth. But as the early years of the Third Age unfolded, it was clear that Sauron's spirit had survived and that his power was again beginning to take shape. So around the year 1000 of the Third Age, the Valar - with the blessing of Iluvatar - decided to send "emissaries" in the guise of old men whose mission it would be to assist in the coming struggle. Tolkien wrote:

"Now these Maiar were sent by the Valar at a crucial moment in the history of Middle-Earth to enhance the resistance of the Elves of the West, waning in power, and of the uncorrupted Men of the West, greatly outnumbered by the those of the East and the South"

Five Maiar were ultimately chosen and they each came over the Sea appearing as mortals well into the later years of their existence. They were hearty beings but still subject to the weaknesses of the physical form. They felt hunger and weariness but they did not age. Nor were they vulnerable to sickness or natural deaths, though their physical bodies could be slain. The Istari were forbidden to reveal their true natures and display any supernatural powers so as not to intimidate the peoples of Middle-Earth. This, however, did not prevent some of the race of Men from being distrustful of them. Since the Istari did not die, mortals perceived their existence akin to the Elves as they themselves passed on with each generation. Their role was to advise and persuade, to unite and influence all of the enemies of Sauron to work together. It is said that only Elrond, Cirdan and Galadriel knew of their true origins although one could speculate that Aragorn may have known as well.

There were advantages and disadvantages to taking physical form. As Tolkien himself writes:

"For they must be mighty, peers of Sauron, but must forgo might, and clothe themselves in flesh so as to treat on equality and win the trust of Elves and Men. But this would imperil them, dimming their wisdom and knowledge, and confusing them with fears, cares, and weariness coming from the flesh."

As the Istari were not expected to work together in concert, they were each at risk of succumbing to the temptation of abandoning their mission for lesser or more selfish purposes. And in their embodiment the Istari's conception of their own origins and knowledge of the Undying Lands "was to them but a vision from afar off".

The members of this order who were chosen by the Valar:

Known In Middle-Earth As: Curunir ("man of craft"), Saruman

Rank/Color: White (head of the order)

The Istari most commonly known as Saruman was higher in Valinorean stature than the others. Like the people of the Valar to whom he belonged, he was greatly skilled in craftsmanship and knowledgeable in the lore and history of Middle-Earth.

Known In Middle-Earth As: Morinehtar?

Very little is known of Alatar. In the History of Middle-Earth Vol XII, there is a notation written very late in Tolkien's life that refers to him as Morinehtar though it is not clear whether this is an alternate name or a name by which he was known in Middle-Earth. He journeyed far into the Eastern lands but never returned. Whether he turned to evil purposes or was destroyed, Tolkien never said. Although, we may be able to assume that since Alatar had not returned to Valinor in Maiar form as of the beginning of the Fourth Age he may well have still existed in Middle-Earth up to that time.

Known In Middle-Earth As: Radagast

While Radagast did play a minor role in the events of the War of the Ring, he had long turned from his purpose by that point. He had grown distinterested in the affairs of Elves and Men and became enamored with the wild beasts and birds of Middle-Earth. Aule's female counterpart, Yavanna, requested quite enthusiastically that Aiwendel be allowed to accompany Curumo (Saruman). Though Curumo came to Middle-Earth first and alone, Aiwendel may have ultimately become somewhat of an annoyance to the White Wizard. Saruman probably felt that any responsibility assigned to him for Radagast was an imposition he did not deserve. Saruman's contempt for Radagast is expressed openly in "The Fellowship of the Ring". It should not be surprising, however, that a Maiar of Yavanna's people would take such an interest in the flora and fauna of Middle-Earth considering that it was she who created them in the first place.

Known In Middle-Earth As: Romestamo?

Pallando is the other "blue wizard" to which Tolkien refers. It is said that he was chosen as a companion to Alatar and was of equal rank. His fate seems to follow that of Alatar and, like his counterpart, his return to Valinor is not noted.