Any man or woman willing to stand against tyranny have a home in the insurgency. 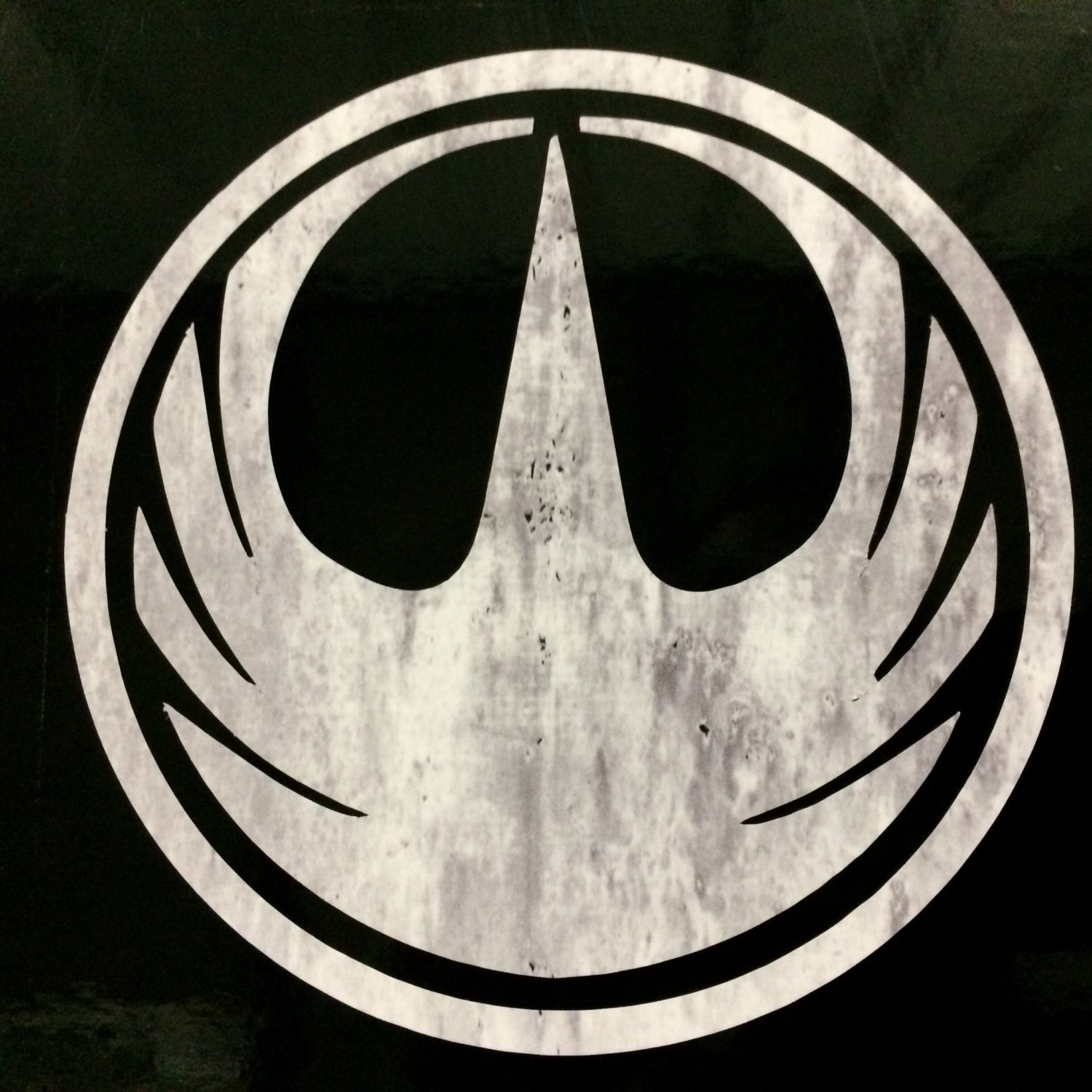 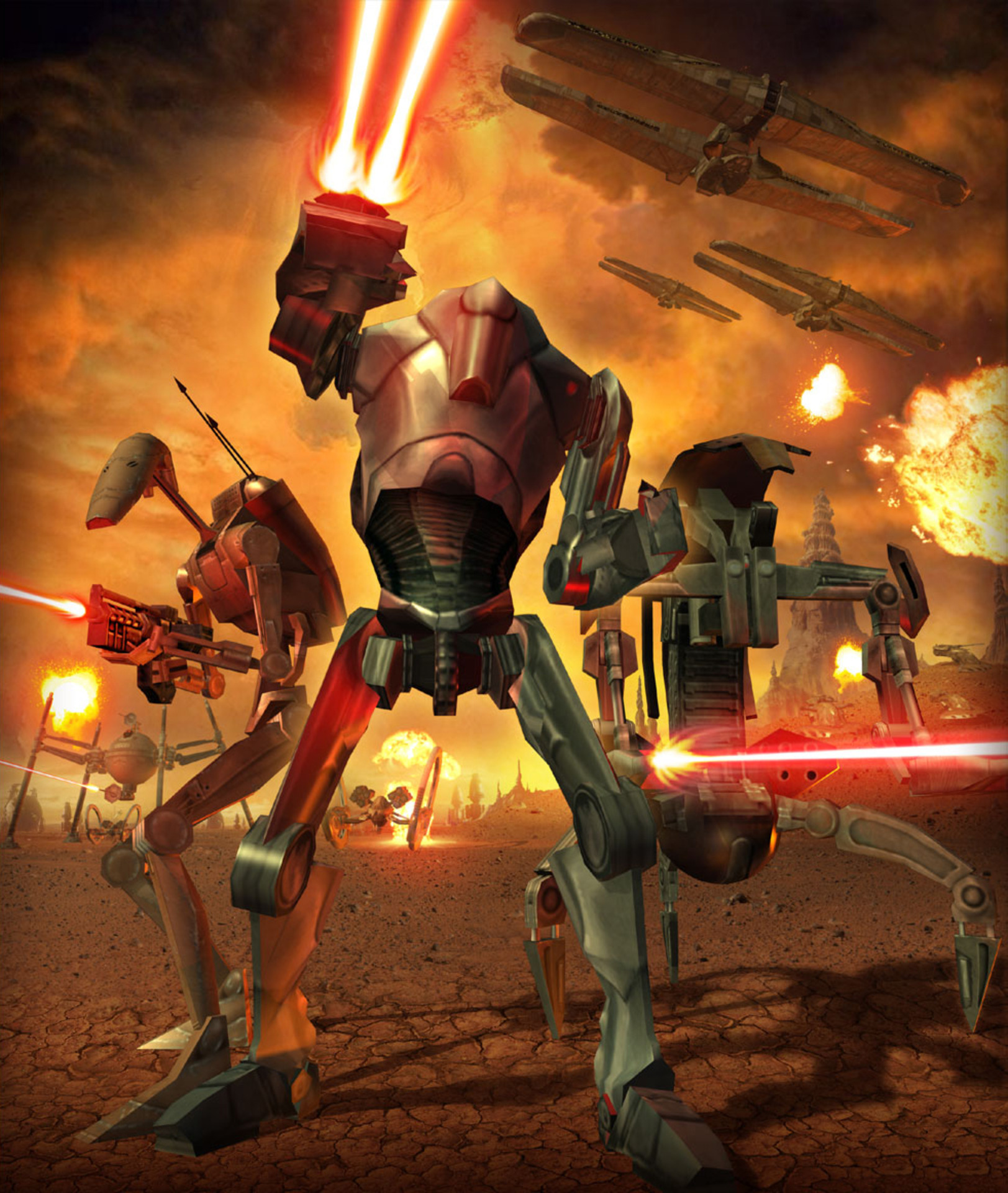 From B1 Battle Droids to their larger B2 Super Battle Droid cousins and even the deadly Destroyer Droid, iconic war droids used by the old Confederacy of Independent Systems during the Clone Wars. 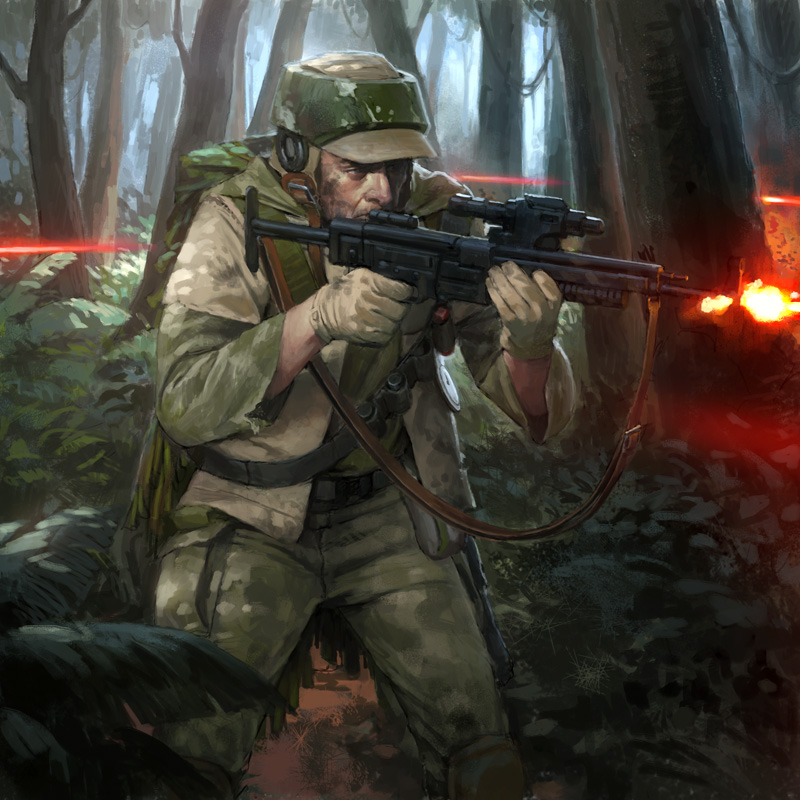 Standard foot soldiers employed by the insurgency. Members came from all walks of life and joined up for many reasons. Imperial defectors are not uncommon. From the moisture farms of Tatooine to the marbled halls of Coruscant, militia troops hoped to shore up the struggling insurgency in any way they could.

Militia troopers constitute the main element of the insurgency's ground force. Formations of militia were organized into standard units of varying sizes, ranging from squads and up to the largest tactical units, the divisions. Divisions were roughly equivalent to Stormtrooper Legions in manpower, but not necessarily in combat power.

Specifically selected for high skill, morale, bravery, and dedication to the insurgent cause, specialists were often either from subjugated worlds, or were Imperials disillusioned by the government's tyranny. Insurgency forces tended to be more individualistic and ragtag than the forces of the Imperial Military.

Very few regular soldiers were capable of becoming specialists, and all volunteered for service. Imperial special forces candidates underwent extensive examination to determine political, physical, educational, technical, and mental suitability; they also performed extensive background checks which included interviews of family, friends, and acquaintances to ensure political loyalty. The insurgency did its best to perform background checks, but was limited in its ability to perform interviews of relatives and associates. The specialist vetting process was run by Intelligence and comprised mainly of interviews, interrogations, and examinations. The vetting process was given a high priority, and resulted in the low penetration of the organization by Imperial agents.

The average militia soldier is commonly armed with a blaster rifle, the occasional sidearm and grenade and a helmet. Depending on the particulars of the operation every militia team will also have one missile launcher along with two missiles or a portable mortar with four shells.

Specialists are generally better equipped with their teams being guaranteed to have sidearms, grenades and some body armour along with at least one missile launcher per team if the mission requires it. For missions that require discretion and sabotage, the Specialists are given sniper rifles and detonation packs.

Key to the insurgency's hit-and-run tactics and an excellent source of increased firepower and mobility, the speeder bike is a mainstay within most conventional galactic armies as a scout and patrol vehicle. The insurgency commonly outfits their speeder bikes with a pack of thermal detonators or mines which can be dropped to shake of pursuers or damage vehicles and infantry during a drive-by.

The prefered model of speeder bikes the insurgency uses is the Ikas Lancer, manufactured by Ikas-Adno. While not the fastest the Ikas Lancer is among the most stable and low maintenance vehicles in the galaxy with a top-speed of four hundred-and-fifty kilometres per hour with a flight ceiling of about twenty metres. The speeder comes with its own sensor and communication devices but is otherwise unarmed unless modified. 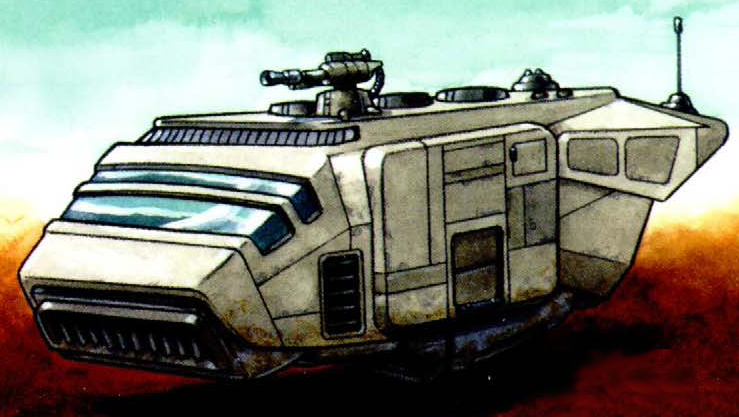 The A-A5 speeder truck was manufactured by Trast Heavy Transports as a repulsorlift long-distance cargo transport. It measured 21.4 meters in length, and consisted of two sections; the cab and the cargo bay. A-A5s had a ground clearance of three meters, and could reach speeds of one hundred and sixty kilometers an hour. A-A5s were covered in armor as strong as some light military vehicles.

The A-A5 only required a single pilot, but the cab had room for a crew of three. This was to allow the crew to alternating driving duties so as to extend the distance the vehicle could travel without stopping. Each cab featured two folding bunks attached to the back wall. An enclosed cargo bay could carry 25,000 kilograms of cargo, as well as twenty-five passengers who were seated on fold-out benches along the top of the bay. A weeks worth of consumables were carried aboard. 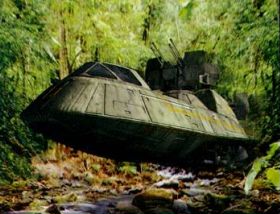 The Armoured Freerunner thanks its name from the freely rotating gun platforms mounted on the repulsorcraft. It has a top speed of three hundred kilometres an hour. These independent platforms were designed to accommodate up to four various kinds of weaponry, based on mission requirements, and swap them quick and easily. Armed with stripped down anti-personnel and anti-vehicle batteries, each vehicle could be equipped with anything from two to four weapon batteries, based on its battlefield assignment. Each weapon had the option of being operated by individual gunners or linked together to save manpower.

The Freerunner featured a standard open-air cockpit, which allowed for increased visibility for the driver, it also made the driver a prime target and limited the vehicle's use under certain atmospheric conditions. Thus whenever possible, insurgent techs modified the cockpit to be enclosed. Common weapon modification include arming the Freerunner with anti-air weaponry. 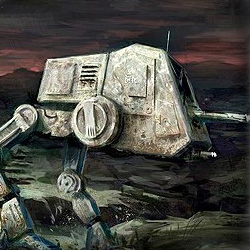 AT-PTs were made to take single troopers into intense combat situations on their own, with the firepower of a squad. They stood only three meters tall. The walkers were capable of reaching speeds up to 60 kilometers per hour and could climb a 45-degree angle, with hydraulic adjusters keeping the unit balanced. The vehicles carried a long-range comm antenna for patrols. The main drive unit provided power and hydraulic pressure for the two legs, and featured cooling vents. The cockpit entry hatch was on the side, while the emergency flare launcher was just above the viewport.

The AT-PT was — compared to its intended threat, enemy soldiers — heavily armored, enough so that small-arms fire could not penetrate the craft's armor. The walker was armed with twin blaster cannons and one concussion grenade launcher, which were only effective against infantry. The walker's superior agility made up for its light armor (in comparison to most other cavalry units). Insurgent techs often modify the walker to carry a heavy mass driver for anti-vehicle purposes at the expense of speed.

The X-Wing is an icon, a symbol synonymous with liberty, hence its nickname "Freedom Fighter". The T-74A is more expensive and complex than the former T-65B and T-70, the T-74A featured advanced weaponry and proved more versatile than its predecessor, and was essential in both dogfights and capital-ship scale combat operations. Appropriated S-foils designs allowed a greater range of fire, while four KX12 laser cannons offered single, dual, and quad firing modes. A built in dual proton torpedo launcher with quick-change magazines permitted the utilization of alternative armaments. Hyperdrive equipped.

The T-74A X-wing starfighter was a cruciform starfighter measuring 12.41 meters in length with a maximum capacity of a single pilot and bottom-loaded astromech droid, which fit into a socket that could be variably configured for different models. The vessel's targeting computer, flight controls and other essential piloting instruments were located inside an armored cockpit module, under which a removable liquid-cooled flight computer further aided the pilot in ship-based operations. Access panels for computer access and storage existed inside the 'nose' of the vessel, along with an auxiliary generator and storage area typically used for stashing survival gear. A small sensor window marked the location of the ships primary sensor array at the very tip of the nosecone, located behind an emergency beacon. Behind the pilot, a built-in life support system allowed the occupant to breathe in an oxygenated atmosphere. 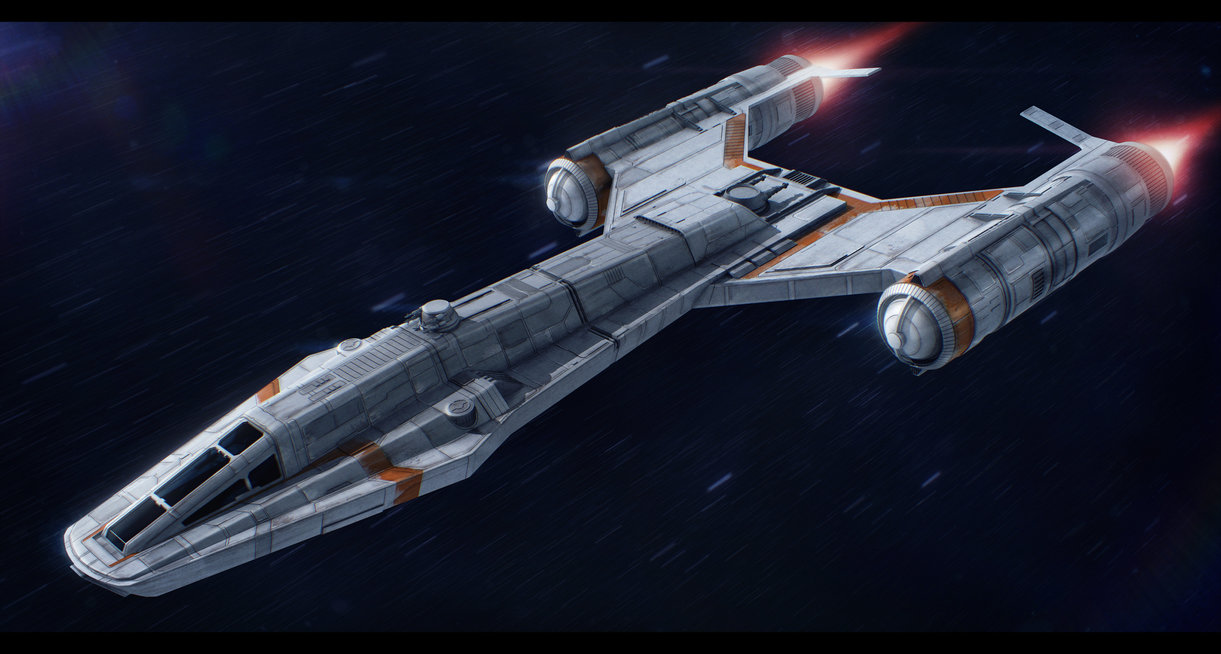 Koensayr Manufacturing's P-22 Sentry is commonly deployed as a heavy duty patrol and escort starfighter by sector security forces and private planetary defense forces. Measuring at 14.8 metres in lenght the Sentry is heavily armed and protected for its size in both shields and armour making it an effective long-range heavy bomber to the insurgency. The insurgency deploys the Sentry as a fighter-bomber, designed to fight its way to its objective, deliver its payload of high explosives, and fight its way out again.

A crew of four is needed for the P-22 including one pilot, one sensor operator and two gunners. It is armed with a rear-mounted twin laser cannon, a top-mounted quad laser cannon and triple proton torpedo launchers for quick delivery. The vessel is Hyperdrive equipped for long-range deployment.

The UT-60D U-wing starfighter/support craft also known as U-wing, was a transport/gunship model manufactured by Incom Corporation and used by the insurgency. Used to drop troops into battle, and provide cover fire for them, U-wings were pivotal in transport and protection of the insurgency's ground forces. Their two wing-like strike foils, or S-foils, were retractable and could be positioned forward-facing or backward-facing depending on the situation. The backward facing, or flight, configuration was used in combat situations as it increased the coverage envelope of the ship's deflector shields and helped radiate excess heat from the engine's core. The increased wingspan however, was often turned into an obstacle by rough atmospheric conditions resulting in the flight configuration primarily being reserved for high altitude and interstellar operations.

U-wings were armed with a pair of fixed-position Taim & Bak KX7 laser cannons. Since its primary weapons required the use of the ship's orientation for targeting, one or both of the loading doors were transformed into gunports with the mounting of improvised weapons such as the Q-56 repeating blaster. Atmospheric speeds of up to 950kph were made possible by four 4j.4 fusial thrust engines attached next to the fuselage. Hyperspace was achieved by four Incom GBk-585 hyperdrive motivators with one mounted in each engine housing, something the insurgency would often modify for creator range and efficiency. 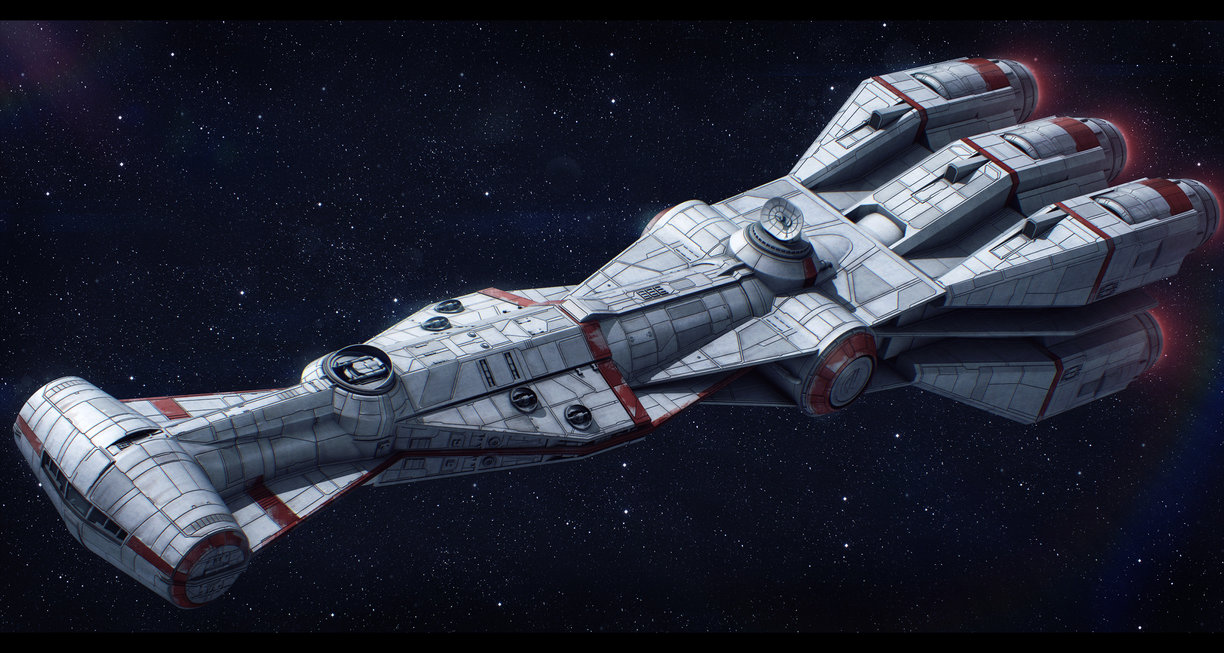 The CR95 had a wide variety of users throughout the galaxy, from pirates to corporations to galactic navies. It possessed the same legendary adaptability as other CEC products, which allowed it to serve in roles as mundane as freight hauling, as a high-profile diplomatic escort or even as a military vessel. Common configurations included a troop carrier, light escort vessel, cargo transport, or passenger liner. Its ease of modification was a trademark of CEC and increased the corvette's resale value. One of the rarer variants could carry starfighters.

The weapon systems varied, although the standard configuration for an insurgent modification mounted four Taim & Bak G8 dual laser cannons, eight single laser cannons and three concussion missile launcher tubes dedicated to anti-starfighter duty. The CR95 is also equipped with the other regularities of starships including shields, hull plating, sensors and a hyperdrive. 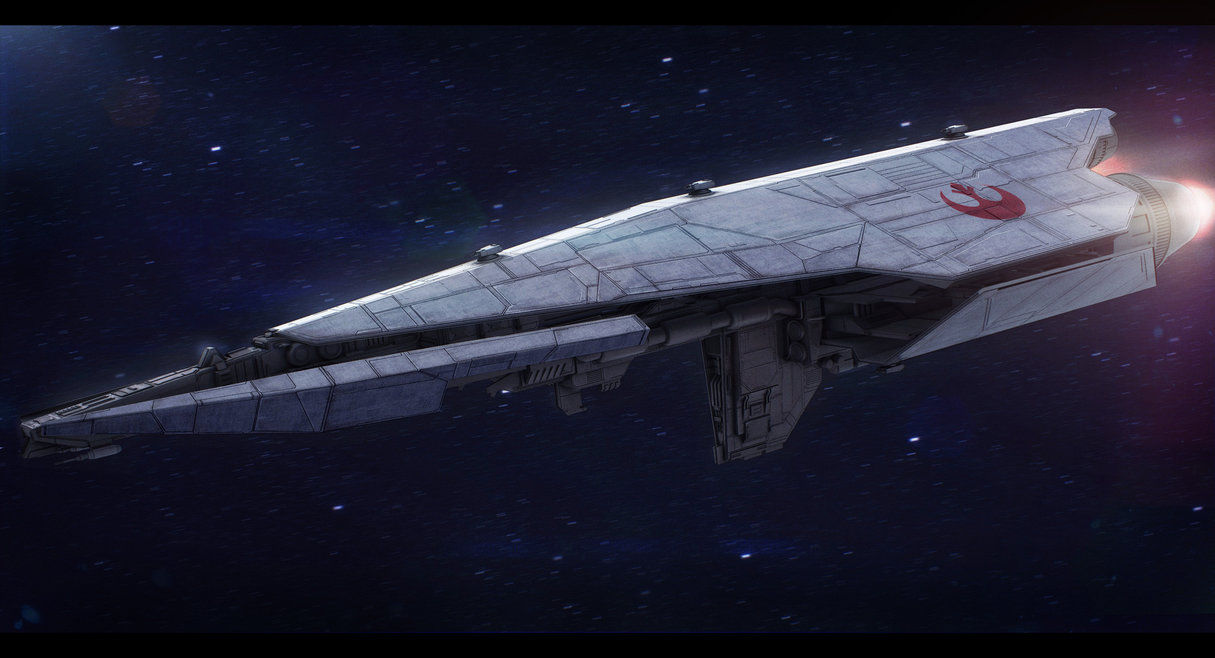 The Sentinel-class Frigate is a heavy modification of an original Mandalorian design that was never put into mass production. It retains its advanced speed and firepower with an adequate amount of protection, which is heavier in terms of titanium-reinforced alusteel hull plating but has ower quality deflectors with several major gaps in the armour structure and blind spots for the weaponry. 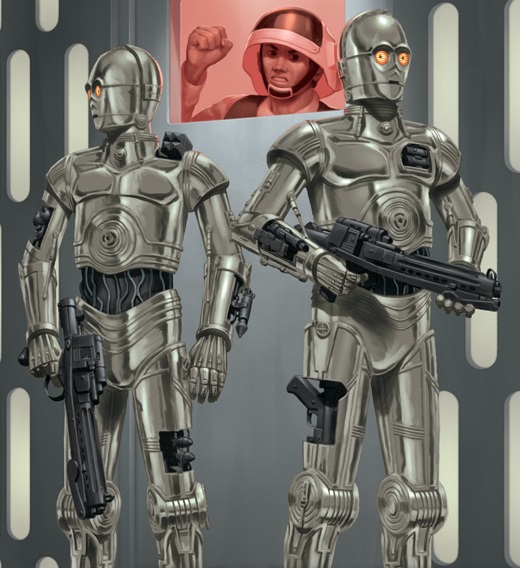