Quick update on Sins of the Fallen (D) Alpha 0.2.2 Patch and the Plague demo features included.

Sins of the Fallen (D) Alpha 0.2.2 Patch has been uploaded and should be available for download soon.

This patch will include some of the latest changes for the Plague race (Still in demo status) including eight new models as well as prototypes for the research trees and gameplay mechanics.

The Plague's gameplay and research tree's are not set in stone yet and may be modified due to testing and feedback. Additionally, the new research tree elements have not been balanced for cost or duration yet. Please feel free to provide feedback on any of these topics or the mod in general.

Fleets are spawned from frigate factories


What does this mean for you?
Plague fleets are constructed very quickly as multiple spawners (eggs) can be created in a short amount of time. However, the gestation process does take a few seconds longer leaving the spawners vulnerable to attack before the gestation process completes. Newly spawned ships also have immature shields which will leave the ship vulnerable until the shields charge to full strength.

The technical side of this allows for the Plague fleet to be upgraded through non-conventional methods via the Virulence's Persistence sub-tree. Each Plague Frigate supports two level of stat improvements over their inital base values. It may also be possible to link additional improvements to frigates to make it more worthwhile to research ship specific upgrades. 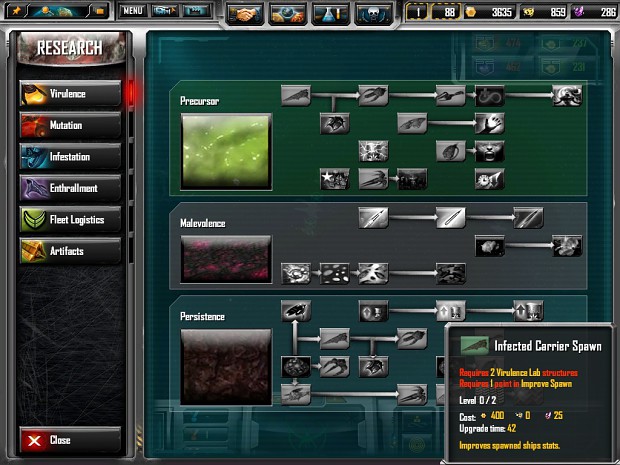 Frigate Growth Research
Another gameplay mechanic introduced is the concept of ships (and structures in future releases) maturing overtime. This feature can be researched via the Virulence's Malevalence tree for Growth Stage 1...Growth Stage 4 (currently only the first three are used). Researching Growth Stages allows for a Frigates Hull/Armor/Weapon Cooldown to be improved overtime. For example the first level of Growth Stage 1 improves these values after 30 seconds. (The growth abilities are still a work in progress and are included for demonstration purposes as the growth abilities will be balanced for type of unit and structure versus the generic levels provided now) 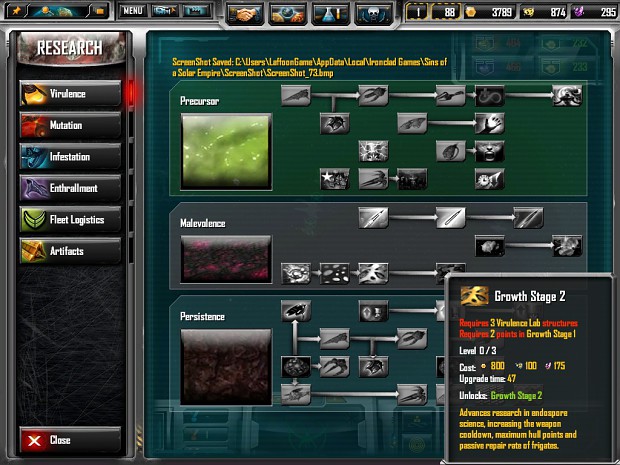 Capital Ship Growth Research
Capital Ships will also support growth based research allowing capitalships to slowly level up overtime via specific research. Currently this is setup via the Fleet Logistics / Capital Ship Supply upgrades. Each level of capital ship supply provides an experience gain per second up to a rate level cap per research level. For example, if the Tier 4 Capital Supply level is research all capital ships will slowly gain levels until they reach level 5. 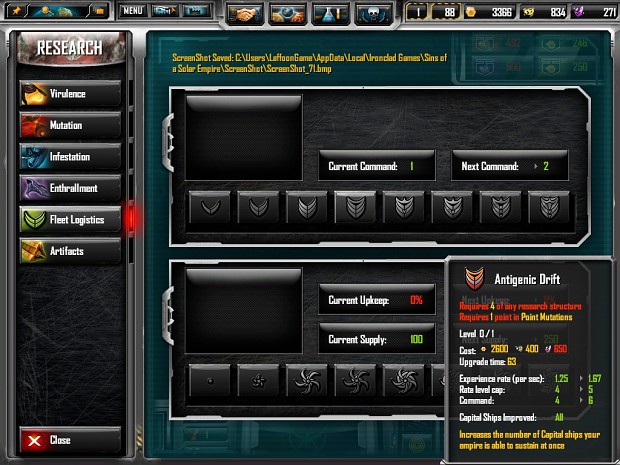 My only criticism is that the hatching noise sounds... off
Like it is supposed to be for something smaller
Maybe a deeper hatch noise or a longer one perhaps?

This or something similar will most likely be adapted into the Ships on creation dialogue which will help with the effect a little more. I had to add something in as the default is a ship explosion sound which was lame.