With Halloween approaching fast, this month's The Hunted update comes packed with some creepy new concept art and further outlines the current state of the game.

Halloween will soon be upon us, so in the spirit of the season we've decided to release several brand new character concept art pieces featuring our monstrous "Hunter" character. These images were all created by our team's Character Concept Artist, Samantha Peña, and show several iterations of our Hunter creatures as they've evolved throughout production. These grotesque abominations were once former scientists who have begun to mutate, slowly losing their human identity, so to ensure that you don't suffer the same fate, it'll be imperative to avoid contact with them at all costs. 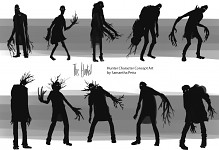 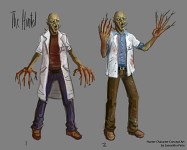 On the other end of things, gameplay development has been progressing fantastically. Team mechanics are all set up and working properly while spawning functionality is very close to being finalized. Our internal tests so far have been incredibly promising and the core gameplay mechanics continue to be polished with each new build. We are beginning to bring environment art assets into the game in order to start populating our level and a rough lighting pass has really added some early atmosphere to the game. In other news, our first official alpha test is going to be held in just a couple of weeks and should produce a wide array of data to help us further iterate and improve on all aspects of The Hunted's design.

Finally, just a quick reminder that we are continuing to look for skilled individuals who would be interested in joining our development team in the following capacities:

From all of us here at The Hunted Development Team, have a Happy Halloween and be sure to keep your eyes fixed on the horizon for more news from us soon.