Update 5b for Fairy Tale is here. This adds the scenario "The Great War", where you rule over The Empire and are locked in a deadly war against the Demon King and his allies.

The scenario "The Great War" is played on the great 100x100 tile map of The Known World and you rule the Empire trying to defeat The Demon King once and for all. You have to kill the baddy to win the game, but watch it, the Demon King rules over resurrected Zuur, a very powerful nation, and has several vassals as well. Your only friend in the world is Crystallin, which is your vassal!

Version 5b of Fairy Tale is ready for download.

The Collective War saw the defeat of the dark armies of the Demon King, yet that war was only a clash with his advance guards. In fury and anger, the Demon King resurrected Old Zuur, the long-forgotten, dead civilization that had once met its inevitable doom in great, unrecorded, mythical wars. The Demon rose from his underground haven to walk the Earth and to, in person, direct his armies towards the final goal of destroying all of civilization. He set down his banner in Zuur, on Black Dragon Island.

In the meantime, the Eastern powers acted resolutely and with vigour. Their advance guards clashed bravely with the demonic troops that poured out from the Angleeye Pass and directed their steady march East. The first skirmishes showed that this was an entirely new enemy, many times greater and more dangerous than those evil hordes encountered before. The leaders in all the eastern civilized nations were concerned that nothing could stand against the new foe.

At that time, the Emperor arose and united the land. The Elven Federation, the Nordic Kingdom and the Principality formed a loose political confederation to unite their efforts to defeat the new threat from the savage West. Soon men flocked to the Imperial banners that were raised in all civilized cities and towns on the continent; the ranks were filled with the bloodthirsty Viking footmen, the proud Elven archers and the noble Principality knights; together they formed armies that had never been seen in the world before, the armies of good, enlightenment and civilization. They prepared to fight under one, unifying banner - the Iron Rose of the Empire, the prophesied power that was destined to save the land.

Out from the Angleeye Pass poured the dark hordes of the Demon King; the Collective trolls, the Zuur Legions and the skeleton archers of the Northwestern wastes; drums beating and torn banners waving, silently marching, a hundred thousand pairs of undead feet. The stage was set for the great powerstruggle between good and evil that was foretold in prophecies and would shape the destiny of the Known World for all future. Destiny had called the Known World to take arms and stand up, united, to face the rising hell. 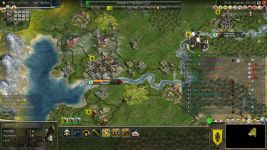