The final phase of the Flavour Update is beginning, lasting only three days before the release of the update.

It's that time again; welcome to this week's edition of the Civics Expanded+ dev diaries for Stellaris. The final phase is beginning, and we will be looking at the final changes made, as well as a few other things.

To make up for some of the stronger bonuses from the civics, a negative modifier was added to each one. Also in this phase, some final changes were made to the origins, though these were miniscule. Note that not all numbers are final.

Previously, this civic was quite bland, really only useful for the lategame once you can construct megastructures. Now, not only are the modifiers it gives more varied, but it also provides something else. 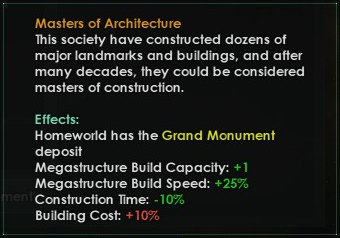 The Grand Monument deposit does not provide much, but it does make the civic both more interesting and useful.

After the civic was severely nerfed, due to imbalance, it became less and less useful. Now, it retains some of its former strength, at the cost of a negative modifier. Remember that it does have a special effect. 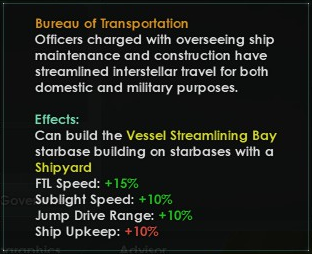 The Vessel Streamlining Bay can only be built on starbases with a shipyard, and it affects ships that are built at the starbase. The bonuses from the building were supposed to be applied to every ship passing through the system, but it seems that it cannot be done. 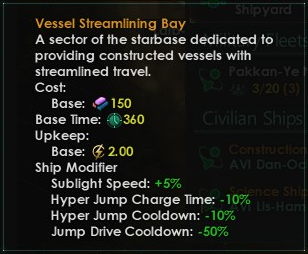 When equipped with a Jump Drive, the tooltip that appears when hovering over the "Jump" icon still says that it'll take 200 days to recharge, but afterwards, when the days required are being counted down, it says that it is only 100 days, and the bonus seen above is in the tooltip.

This civic had to be nerfed many times for it to be on par with the rest of the mod civics, and rightly so. However, this caused the civic to apply smaller and smaller effects. Now, it provides fairly small bonuses, along with a special effect. 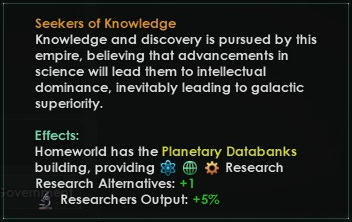 Do note that we are contemplating whether the civic should increase the upkeep of researchers. It is likely that the decision will be passed and it will balance the civic nicely.

The Planetary Databanks building cannot be built on any world apart from your capital, but since your homeworld begins with it, you should not have to build it once. Unless, the building is destroyed, ruined, or the capital of your empire of moved. In this case, you can build another one.

As you can see, it gives one researcher job, but it also produces five units of each research point. To fill this extra job on the start of the game, your homeworld has another Pop.

This civic is taken quite literally in the 1.3 update, with its special effect being a new policy, with several policy options, available to the empire with the civic. 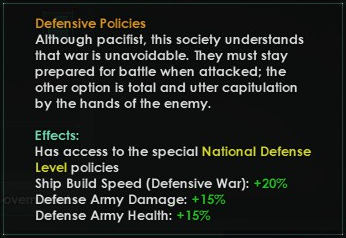 This civic does not have a negative modifier, but that is because every policy choice of the new policy has some sort of negative to it. The higher the level of defense, the stronger the bonuses will be, but this also applies to the negatives.

Above, you can see the "Moderate" option highlighted, providing the empire with increased ship build speed and more defense platforms, at the cost of less amenities and more ship cost and Pop upkeep. Do note, that in the "Low" option, the Pop upkeep modifier is absent.

Also, in case the bonuses aren't currently needed, due to peace, one can choose the "None" option, which decreases Pop upkeep by a small amount, at the cost of less Pop happiness.

The final civic we will cover today is World Council. Even when it was first added into the mod, I knew that it should provide your homeworld with some sort of building to represent the council. 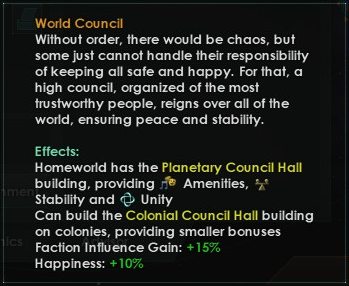 While it doesn't add any jobs, it provides some fairly large bonuses, with a moderate energy and consumer good upkeep. Obviously, only one can exist at a time, and only on your capital.

Furthermore, as you can see above, there is also another building which can be constructed on colonies, and provides smaller bonuses, but also has a smaller upkeep.

The following is the changelog for the 1.3 update. It does not include every single new feature, but is list of the main and most important aspects of the update.

QUEST FOR THE SEEDERS

And here is a quite list of all the main features of the mod as of the release of the 1.3 update, which will be shown on the main modpage:

You may have noticed that ascension perks were not edited (much) during the production of this update. At first, there weren't any ideas for them, and when changes were suggested, it was too late. So, there will be several, more minor updates following the 1.3 update, all focusing on different areas. This will, however, be some time in the future.

Another article will be posted on the 15th of July, soon after the release of the update on Steam, ModDB and Paradox Mods, regarding the future of the mod.