The grand Flavour Update to the Civics Expanded+ mod has officially entered phase III. We'll be looking at some of the new additions to the mod.

Welcome to this week's edition of the Civics Expanded+ dev diaries for Stellaris. The grand Flavour Update has now entered phase III; again, work will still continue on aspects from previous phases, but that is no longer the main focus.

The Arcology Masters origin, now named "Dwindling Arcologies" used to be quite a minor origin. Of course, you began on an ecumenopolis, but that could be seen as quite overpowered in the late game, and possibly difficult (to get access to food, and possibly minerals) in the early game.

Now, there will be a larger story for the origin, and it will be slightly different to before; previously, the origin story was that your species can terraform planets into ecumenopoli, but that is quite bland. Now, the story is that your species is overpopulating, and an ecumenopolis was needed to house society, but this caused the planet to become unsustainable.

The origin is largely influenced and has many features from the Inflection Point mod, with permission of course. However, several parts are slightly different, and the localisation and description is changed. This was done because after planning what to do with the origin, I came up with something similar to the mod, while not knowing that it was so similar. After asking the mod creator, we decided to utilise aspects of that mod.

Perhaps the most exciting part of the update is the fix of the graphic issue upon empire creation! When choosing the origin, your homeworld will show the mammalian version of the ecumenoplis, but it is important that you still choose the city graphic culture, as once the game is loaded, the planet will have the chosen graphics.

Instead of beginning with a permanent planet deposit (for minerals) and an empire modifier (for food), the beginning will be more focused on the lack of sustainance on the world. There will be a deposit that will provide food, and a temporary Decaying Mines deposit, providing minerals for a limited time. Furthermore, there will be several blockers that can be removed after researching the correct technology/special project.

Of course, there will be many new events added to the origin, the majority of which regarding the lack of resources and how stockpiles are decreasing. The first event removes the Decaying Mines deposit, as the mines and stockpiles have been completely used up. 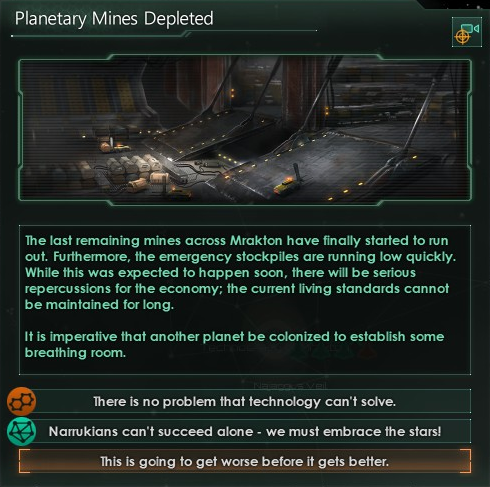 This will mark the beginning of a series of events that reduces the production of both consumer goods and alloys more and more as time progresses. No matter what option you choose for the event, it will bring the following results.

There will also be some other events, differing from the previous chain. One of these events is the civilian economy seizing up, and how it affects the population on your homeworld. Of course, the lack of consumer goods and such will upset your people, lowering amenities, and even trade value. It is worth noting, however, that despite all of these debuffs and red numbers, it is unlikely that any of your resources will be in severe decline. On the other hand, the happiness, housing and possibly crime will most likely be in the lower end, perhaps in the negative.

So, how are you going to fix the issues on your homeworld? By finding a colony. Your species will not have a preference to ecumenopoli, as they did not always live on one (like with the Life-Seeded origin), but instead, they will prefer the world you choose when customising your homeworld, similar to the Post-Apocalyptic origin.

If you began with a guaranteed world nearby, then the origin would be too simple and easy; instead, like the Doomsday origin, there are no guaranteed habitable worlds, no matter what option is selected at game start. 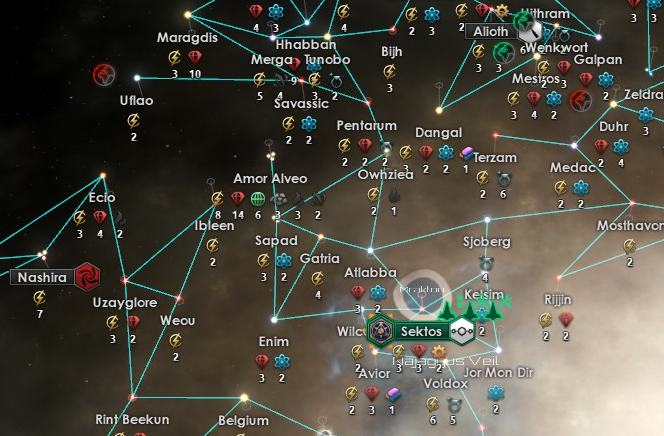 As seen above, there are no habitable worlds nearby at all, with a planet with low habitability fairly far, and two gaia worlds (what are the chances?) several jumps away.

Once a colony is settled, an event will trigger five years later, mentioning how a bright future is finally within our grasp. This event, however, only provides a small happiness bonus to your empire. Later on, more action can be taken to restore order and fix the problems residing on your homeworld. These actions might be in the form of special projects, technologies and decisions.

That's it for this dev diary! Again, big thanks to hanson825 and the Inflection Point mod for allowing us to utilise features from their mod.

Phase IV, the penultimate phase, will begin in another two weeks, with the dev diary being released either on the 3rd or 4th of July. The phase will focus on something other than origins.