Well, after our drawback, it's looking good... also I may be working on a BIG mod...

Half-Life 2: Aperture Chapters is going to turn out a star, I just know it. The new version of the first level is working better, looks better, and is outright amazing. Alongside that I've made the Borealis look better with a bumpmap. Also, I've added ep2 to the engine list, so I think that may make NPC weapon usage possible, I'm not sure.

I've just released four new pictures of Ac_p1, Enjoy for now, I've come down with a cold, it might slow me down a bit. Also I've got more work on my shoulders now as well, as I might be a map designer for Blue Shift: Source otherwise known as Half-Life: Guard Duty (Which is also the original beta name for Blue Shift) 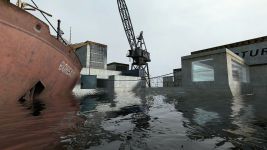 I've also been working on a concept version of ac_p2, which is yet to be released, but just keep watching for it...

A side note, I'd like people to start using the Mod's forums, they've had no activity since I've put them up. Here's a link... Moddb.com

Everything seen so far is work in progress, it is of no terms what anything will EXACTLY look like in the final game.

You're right, it is better than your first try ;-)