This is the very last news update for Kane's Wrath Reloaded and the ending has reached its final point.

I hereby declared to announce that I am releasing the KW Reloaded 1.7. Alongside with the mod release, I am also releasing the source code of the content that I have done so far so you guys can make your own mods. 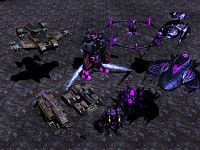 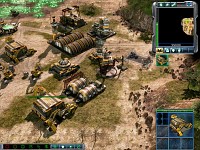 I know there are some remaining issues left in this mod, but this is as far as I can go. Unfortunately with all the testing and experimenting for some time, it's sad to tell you that the skirmish AI and the Giga-Fortress (as the 10th epic unit) won't be in version 1.7. Some of the other content that I am working on (such as new SP and MP maps) have been cancelled until further notice. I highly recommend reading the PDF readme before extracting and playing the mod. Any further questions involving this mod, you can PM Fellyne, INtense!, Bibber or some other C&C modder for some help.

Here are the changes of KW Reloaded 1.71:
• Fixed an issue that a Mastodon cannot be seen in-game due to missing art files.
• Removed the mine layer ability for the Steel Talons MRT. It was unnecessary.
• Custom in-game music is now at a high quality of 320bps.

Here are the other changes of KW Reloaded 1.7:

Global Changes:
• Added Service Depot to all GDI and NOD factions. Requires War Factory to be built and only one unit can be placed in a service depot at a time for repair (takes several seconds).
• Added Orca Bomber for GAF and Steel Talons factions. Requires Tech Center to be built.
• Added Underminer for the Marked of Kane faction. It can set mines, attack with mines and repair units. Requires Operations Center to be built.
• Added Smoke Grenade ability to the Riflemen Squad. Applies to all GDI factions. Smoke may or may not be seen.
• In-game music mentioned in the last release is now added to the final version but in low 128 kbps quality.
• Units that fire prematurely before turret changes to the correct position has been fixed with a pre-fire delay on their weapon(s).
• Sorted order of building MCVs, Surveyors, Emissaries and Explorers to the very end of every vehicle building tab, except tier-4 war factories.
• Structures in Logic Command Set that did not previously have Toggle Power, Self Repair and Sell commands have been added in to all factions.
• MOK Vertigo model is replaced by the C&C4 model. Ability and attacking remains the same.
• ZOCOM can now build a Tiberium Field just like the GDI.
• ZOCOM Predator Tank can now use the HEAT ability (effectively against armored vehicles) and now has a Rocket Pod upgrade (which increases damage).
• GDI can now build fake structures (requires fake crane to be built and fake crane requires the original crane to be built at a cost of 500 in 10 seconds and a limit of one on the field). Those fake structures shall cost 100 in 5 seconds and they pertain to do nothing but stand as decoys with low health. Armory, Power Plant, Refinery, Reclamation Hub and other defensive structures are excluded.
• Reduced the upgrade bonuses of Vehicle Bombardment, Offensive Maneuvers and Boosted Power.
• Kane, Mastermind, Prodigy and Cultists can no longer use mind control on epic units and now GAF defenses.
• Tiberium Agitation now applies to all sub-faction units and structures with Tiberium in which were not listed.
• Removed the building limit on any aircraft unit that requires ammo to be refueled at an Airfield, Hangar or Gravity Stabilizer. There is a bug where you can build unlimited aircraft in one turn even though the limit of placing units with reloadable ammo on an aircraft structure is four.
• Cyborg Commando usage of C4s now only applies to structures but not units. (there's an issue somehow that he can use the plasma cannon on structures instead of C4s)
• Cultists finally get their own mind control weapon, and now gets five cultists in a squad. They cannot use mind control on structures, aircraft and epic units. Cost reduced to 1200/15 and still requires Technology Assembler.
• Reaper-17 and Traveler-59 Corrupters can now lay mines.
• Some locomotor, armor and weapon codings have been changed to some units used from KW Patch 1.02+ as part of the enhancement. The following changes are also from KW Patch 1.02+:
-- Shadow Squad attack bugs fixed. Glider landing will start at a range of 50.
-- Scrin/Reaper-17/Traveler-59 MCVs can now be teleported by either Mastermind or Prodigy.
-- Seekers and Fanatics weapon target priority changed from infantry to vehicles.
-- Reaper-17 Reaper Tripod charged reserves bug fixed.
-- Flame weapons can now destroy friendly husks.
-- Shatterer, Zone Shatterer and Shockwave can now destroy husks via force-fire.
-- MRT repair radius increased to 300. Unit movement speed is the same as the APC.
-- Fixed Stormrider damage versus certain sub-faction units (Pitbulls, APCs, MRTs, Wolverines, Attack Bikes, Stealth Tanks, Gun Walkers and Seekers) to match that versus respective vanilla faction units. This gives 25% damage decrease versus these sub-faction units.
-- Shock Troopers, Zone Raiders, Black Hands, Tiberium Troopers and all Commandoes are now immune to damage from the Cloaking Field.
-- Snipers can no longer attack vehicles and structures. Veteran Snipers can now spot for Juggernauts and Battleships from within transports, foxholes and bunkers.
-- Orca Sensor Pods attached to friendly vehicles are no longer removed by friendly drones. Now it has an explosion effect and sounds when destroyed.
-- Delays on several abilities reduced: Jump-Jets, Rig/MCV pack-up, Flame Tank/Mantis pre-attack delay and Orca Sensor Pod deploy delay.

GAF Changes:
• Some C&C4 units now have modified portrait icons rather than the original blue background ones.
• Talon can now fire correctly from its weapon bone positions.
• Archangel now has its first primary weapon fixed (it’s supposed to fire with a particle beam). Speed decreased slightly and health increased slightly.
• Orca Paladin now fires with its laser (unlimited ammo) so it does not need to return to the airfield. Speed decreased slightly and health increased slightly.
• Firehawk model is replaced by the C&C4 model. Ability and attacking remains the same.
• Mobile Repair Transport is now buildable with the same cost and build-time.

Fixes/changes that cannot be done:
• Making skirmish AI to work in-game. Although CNCLabs did it using a Neutral faction for the Forgotten, there’s no way I could use a Neutral faction to work since it results in a game crash.
• Adding a Giga-Fortress in-game as the tenth epic unit. The technical issue is the conflicted id names and an asset error of one default state, preventing this unit (and mod) to load in WorldBuilder and/or C&C3.
• Infantry units of 2 or more being garrisoned in an APC, Armadillo, Reckoner or Mastodon will result getting one infantry unit getting out at one time or even worse, none of them comes out. The only exception is the bunker and civilian structure. This is a common bug that neither EALA nor any modder can fix.
• Harvesters that cannot collect Tiberium automatically on which they were not from the Tiberium Field but independent objects is another common bug that neither EALA nor any modder can fix.
• Fixing tire treads to some C&C4 vehicles require actual coding from C&C4 unless I create tire tread objects.
• Death animations to some C&C4 units require actual coding from C&C4 unless I create collapsed objects.
• In the GDI Mission of Rome, a Mastermind unexpectedly can attack any unit with its tracer gun fire. Because the unit is modified, this affects this odd bug that I cannot resolve.
• Assault Mothership may require a new weapon projectile in order to show laser fire in four weapon bones since it only shows one laser fire.
• MOK Underminer’s ability to burrow itself to another location doesn’t work. Either a missing coding or animation file prevents this to happen.
• GAF Spartan’s ability to turn itself into a turret doesn’t work. A missing animation coding and other animation file(s) prevent this to happen.
• A replacement weapon to the Defiler requires a new weapon projectile (that I have no clue how to set it up) and without the major source code from Carnius, I cannot do it. The weapon art files can be found but the issue is making the new projectile to work.
• Adding a rally point cursor texture (visible from player) and using an EVA announcement on upgrading. Those require permission from Stygs to get the coding and source code from the Tiberium Wars Advanced mod. I would really want this, but time ran short as he is MIA in the C&C community.

I hope you have fun with this mod and hopefully if you want to modify my mod use the public source code that I have released. All credits and other changes are mentioned in the PDF readme.

:( No workable AI... At least fixes are welcomed.

Sad to see you go, this is a great mod and it will be a shame to not see more from you. Thanks for your hard work.

This is so sad. But we got to accept it. An unfinished and final release....is still better than a dead one.

Thank you sir. Maybe some others will finished it in theirs own mod.

you hard work always will be appreciated, i know it took lot effort and time, so THANKS to keep active this mod until now, best wishes ;)

Its time to come downstairs...

mastodon when built is invisible lol was funny

Is this game doesn't have AI?

sorry, but i am confused, is this mod for C&C 3, or kanes wrath expnasion?

Hi me and my friends have been playing this for a while now and have started to get out of memory errors after hours of playing it with no problems. Is this a mod related error and if not do you know any fixes ?