How the environment will have an impact within the game Lithic.

Posted by Flintlockstudios on Nov 27th, 2014

What do we mean by the “Environment” in Lithic?
It might seem a simple question, in most games the environment is something the game takes place in. It looks pretty, or threatening, depending on what mood the builder wants to set and serves as a backdrop for events in the game. In Lithic it's very different. The environment takes on the role of the main antagonist that would normally be filled by other civilisations or a central villain.

When we first started developing Lithic we decided that it would be a game about survival. In the beginning your tribe has few skills and little knowledge – they are just surviving, gathering what they can, moving on when resources grow scarce and just about gathering enough food to last the day. Then doing it all again the next day. As the game progresses your tribe develop skills that allow them to gather more food, to store food for hard times and allow tribe free time that they can use to develop art and culture.

I'll try not to digress and drift into talking about gameplay, just to say that everything we're putting into developing the environment is geared towards making it as much a living, active part of the game as the characters. 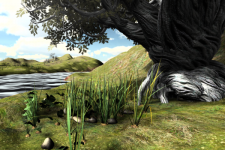 Zoning
Lithic isn't an open world game, we're building in zones. However all these zones exist in the same level, so there's no load screen between them. We took this decision because it means we can add far more detail to each zone than we could if they had to load sequentially and be displayed on screen at the same time. For the random skirmish game these zones are randomly chosen and arranged in a grid, then each is given a random distribution of resources and creatures so that no two games are exactly alike.

We've mentioned before that we're not using any billboarding or camera distance object culling in Lithic. We can do this because only one zone is displayed at a time (each zone is 300m square), this means that we can have more detailed plants in the game and so can use these plants to give feedback to the player directly. For example we can have foliage be crushed down if a heavy animal walks over it then grow back over time so the player can see if something big has passed through. This is still in development but it is working as intended so far. 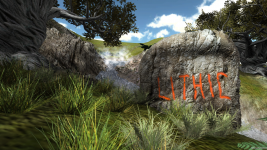 Creatures
Of course no environment is complete without some livestock to populate it. Again we're taking a slightly different approach to this than you might expect in a fantasy game. To begin with we haven't invented any monsters or animals at all, every creature we putting into Lithic existed at some point. There's prehistoric animals you might expect – Mammoths, sabre-toothed cats, that kind of thing but we've also got some you might not expect or have heard of before like a hippo-sized wombat or a six metre tall predatory ostrich. The list is still under revision and apart from the six animals we've set out for the spirit avatars it could well change before we release.

These creatures follow their own aims and none are directly hostile to the player. A sabre-tooth cat might attack – but only if it is hungry and your tribe member looks like easy prey, it won't attack because we've done anything as arbitrary as make it an “enemy”. It's likely that you'll find some of the large herbivores more challenging than the predators. It's not too hard to chase off a Lion, but when there's a six ton Giant sloth sitting in your field of crops eating your winter food surplus it might be a bit harder to get rid of!

We are really interested to hear what you think so if you've got questions or feedback, please feel free to leave comments below