Post news RSS The End of the Sun- May Developer Update- NEW Teaser!

NEW teaser from our adventure game set in the slavic fantasy world. Read whole gamedev diary about one of the fantasy creatures that You will meet at The End of The Sun connected to Slavic Mythology – some kind of monster called “Child of water.”

This is a Huge Update. We have a large Gamedev Diary and New Short Teaser for You Today!

This diary will be about one of the fantasy creatures that You will meet at The End of The Sun connected to Slavic Mythology – some kind of monster called “Child of water.”

You could Watch it on Youtube here or below. 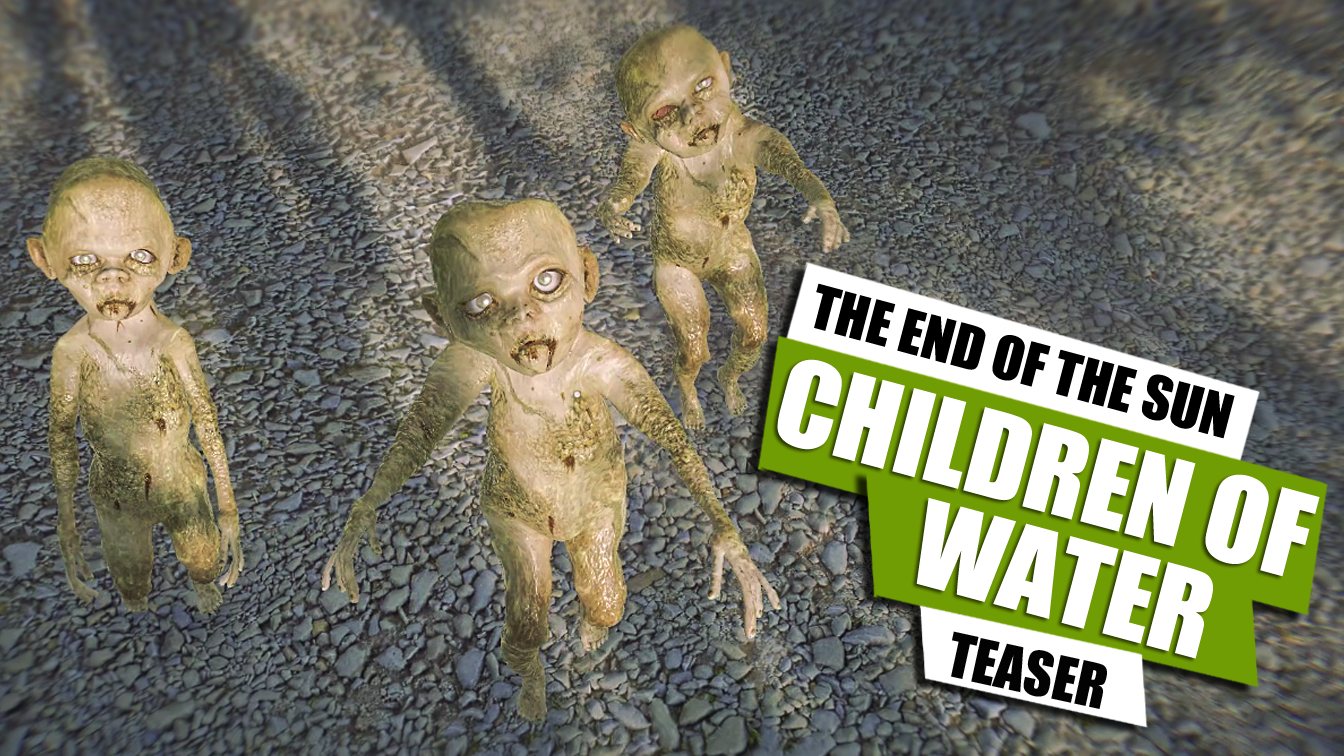 The teaser shows a small part of the gameplay where Children of Water attack the player (who play as the Ashter – kind of Slavic sorcerer).

But wait… Combat in an adventure game?

Yes! but don’t worry… “The End of the Sun” is still an ADVENTURE game, not an RPG :) Mechanics that You see on video is connected to some gameplay mission/puzzle, but at the same time, it makes the possibility to put a little bit of immersive action into the game.

If You would like to know more about Why We decided On that kind of gameplay mechanics and How we designed the “Child of Water” 3d model, animations, AI, and What exactly are Children of Water in Slavic mythology, just Read That blog post. :)

“The Child of water” – The making of

1. Design and what is behind it – a little bit about myths and Legends

You probably heard many legends or small stories about people who drowned and became some kind of monsters or ghosts connected to rivers or lakes.

Of course, Slavic mythology has its own stories… to be honest; there is the whole group of monsters and creatures (good and bad) that live in water or near water. [Probably because middle and eastern Europe is full of rivers, streams, ponds, lakes, and swamps, oh yes, swamps are the perfect place for different monsters to hide :) ]

How could Cyanobacteria be connected to the “Water monsters”?

One theory says that many Slavic stories about monsters living near water are connected to some kind of “protection” for uneducated people from “cyanobacteria.” That bacteria makes the water in lakes and ponds really toxic. It makes the water becomes really green, and it is happening mostly in the Spring. This is Why older people said to children – “Don’t go into the water because before Summer Solistice the Drowners will take You into the lake!” They just wanted to protect children this way.

“Bloom” of cyanobacteria in the pond (Source: wikipedia.org)

…for sure, more often than on the Sahara desert :) this is probably the next reason why there are even more bad monsters in mythology that could manipulate the lakes or rivers. The End of The Sun happens in an environment inspired by the Polish environment and nature. In our country, we have bigger or smaller floods every year.

The same number of bad as good creatures.

Yes, we have to mention that too. The Slavic myths also show a huge amount of good creatures that helped good people not drown or showed them their way home. What is important here and what we noticed is that many creatures were presented in the later middle ages as something bad to get rid of traditions and Slavic believes. So many positive characters and creatures in legends were later shown as demons. 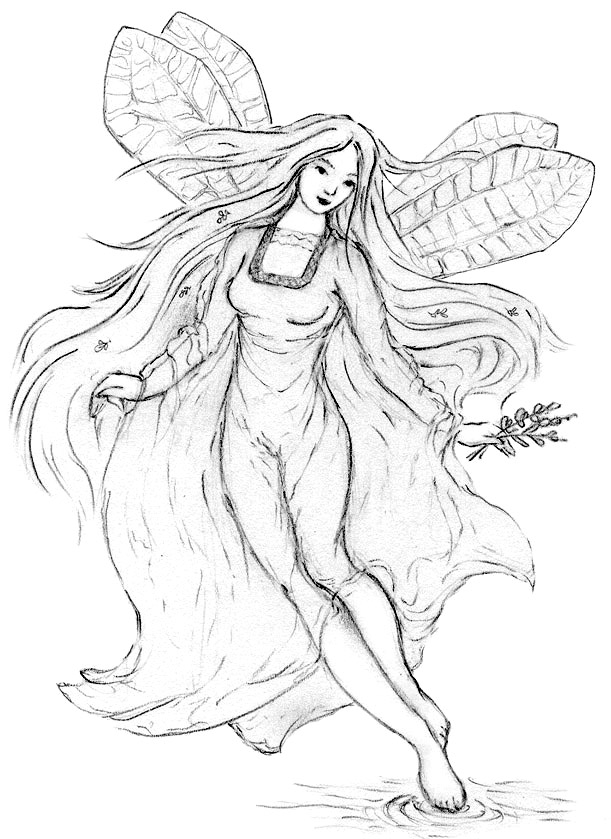 “Rusalka” was a kind of good creature in Slavic mythology connected to water (source: wikipedia.org)

2. Child of Water – the creature that doesn’t know it is evil.

There is very little information about it, so we had to make our own interpretation…

Some legends say that this (Child of water) is kind of “Drowner” (Most of You probably know it from The Witcher game series…. yes, the Drowner is something taken straight from Slavic legends :) ) “Drowner monster” is created from the body of someone who drowned (in most cases bad person) According to some stories when a small, poor child drowned and its body was lost in the water forever then the “Child of water” was born.

This is a really terrible story, We know, but we had to explain that to be able to explain why Child of water looks and behaves this way in The End of The Sun game. 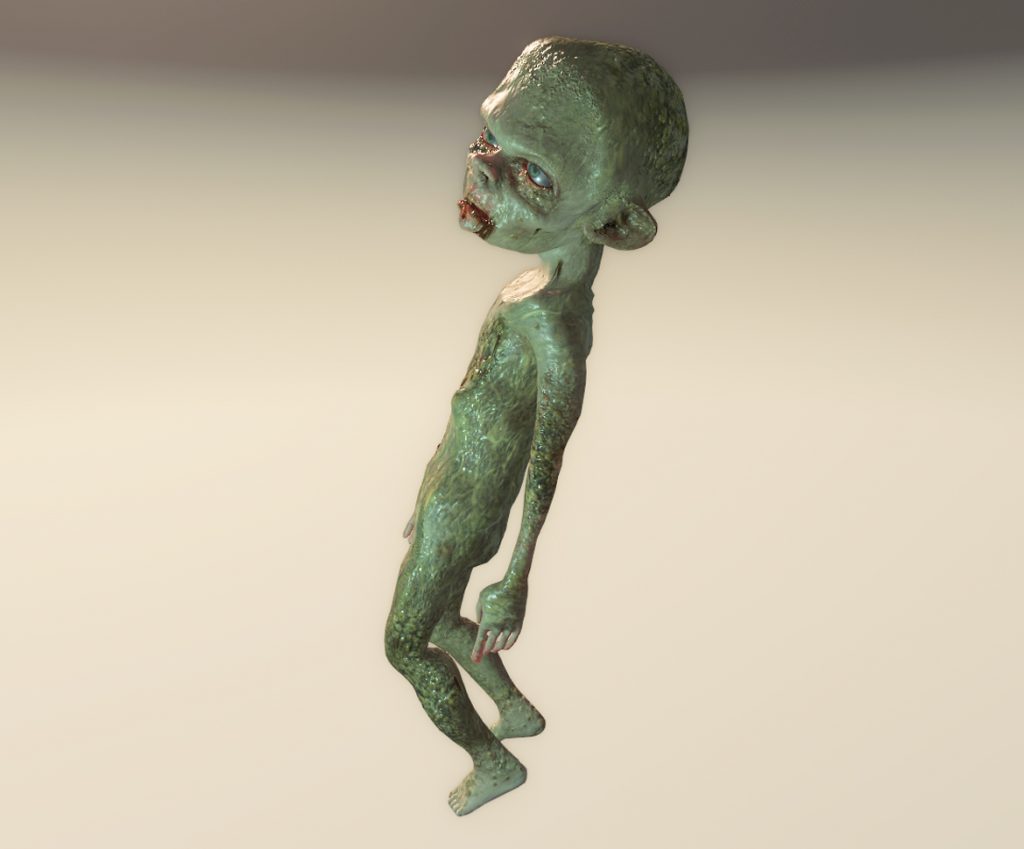 Good design always show the story of a character visible in its look.

So the problem with “Child of water” is that it never was an evil human being ( newborn or Young child just can’t be bad or evil). That’s not exactly a problem, but that is something that makes it different from “Drowner monster” (created from only bad people bodies)

The body of “Child of water” doesn’t know it’s already dead. It thinks that it is still drowning, and it is trying to rescue itself while hurting or even drowning/killing other people.

This is our interpretation, of course, and this is an essential part of the design.

That knowledge influence how our “Child of water” looks, behaves, moves and sounds. 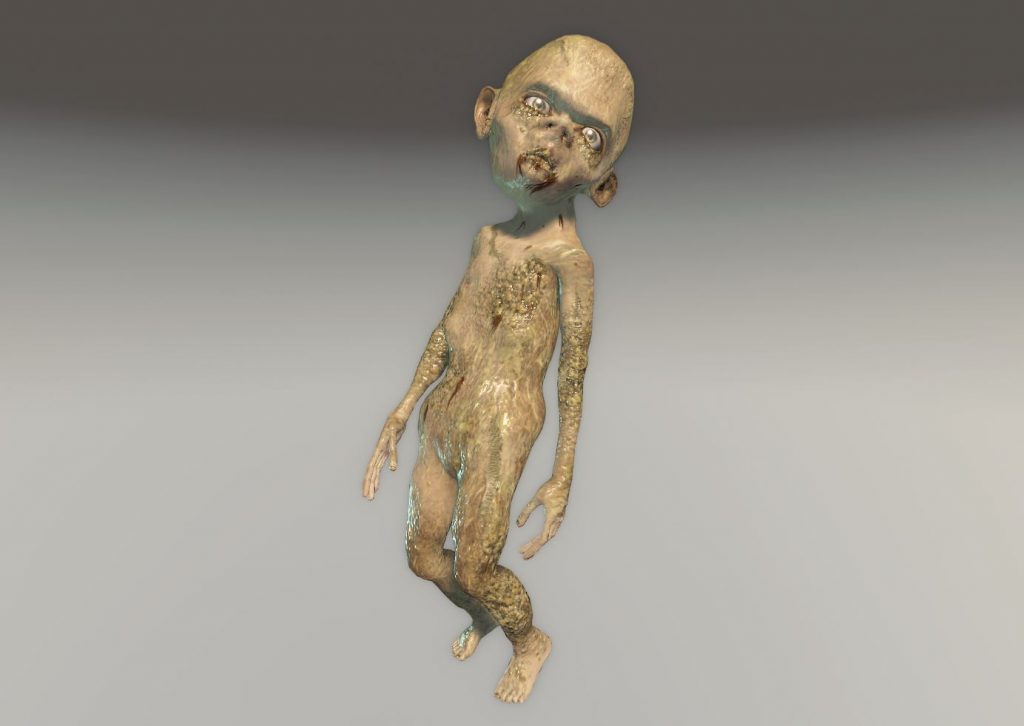 The whole design is always based on what exactly is now and what/who was the creature in the past. Then designed look, sound, and movement will show that creature’s story.

3. Graphic Design – what happens to the dead body in the water.

Yes, again, terrifying things. After a long time in the water, the shape of the body is for sure partially deformed and swollen; also, it is destroyed by time, fishes, and water plants/bacteria.

But that’s not the whole thing… 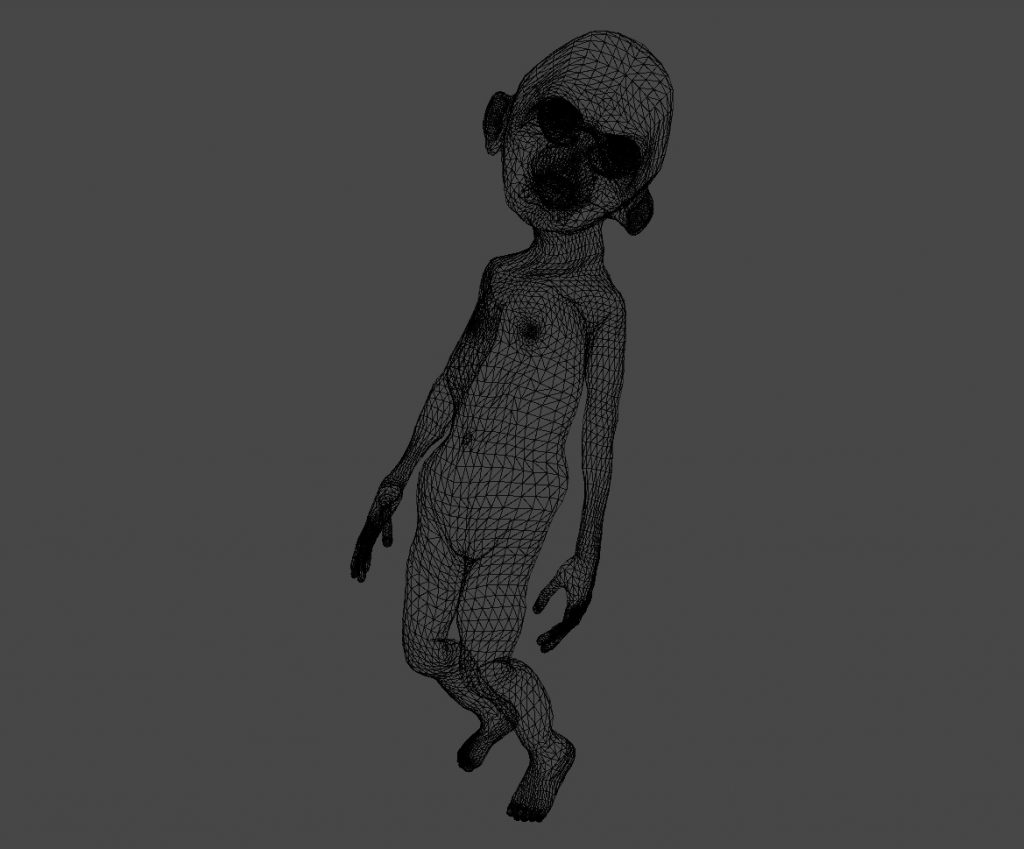 Wireframe of 3d model of “Child of water” We made here base deformation of the body. Look, for example, at the head whose skull is crushed and deformed. This is because the dead body in a strong river stream will hit rocks, leading to that huge deformation. 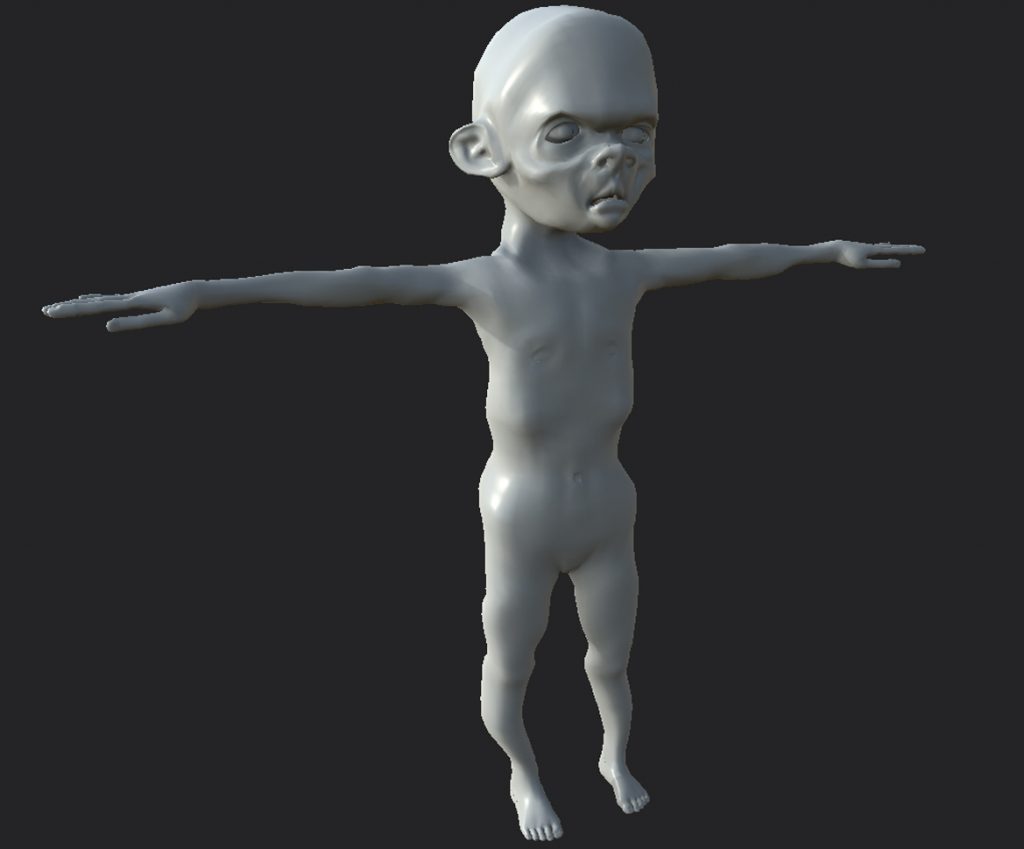 The 3d model without material – You can see here that the base design was made already on that level. Broken bones of legs and nose destroyed eyebrows, etc.

The mix of Human and Monster…

So besides what all that environment (river or lake) itself did with the child’s body, we also decided to add some typical monster’s mutations, like much longer hand fingers (so the monster could move better in water, etc.) 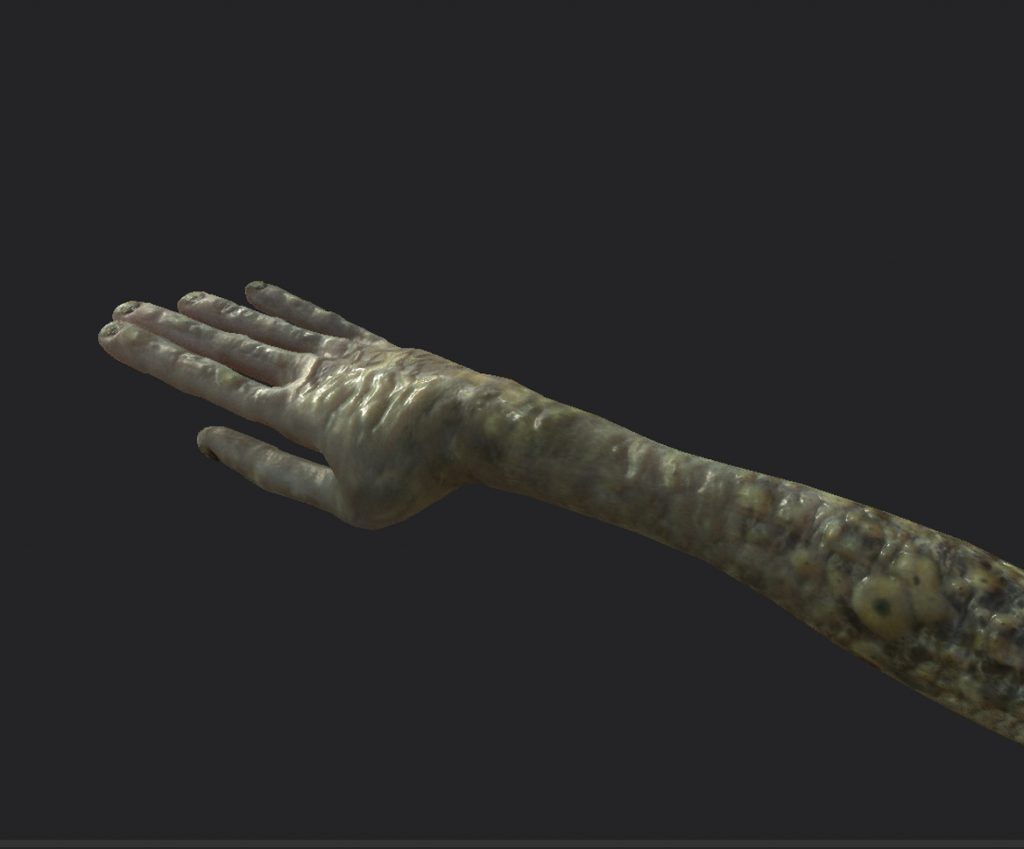 Hands are one part of the design that is typical monster’s deformation. We decided to make fingers longer so the creature could better move in the water.

Now a little bit of information about skin material.

We decided to start our painting (in Substance Painter) by creating standard human skin, but a little bit more desaturated and greener. (as drowned man’s skin) Then we added some scarifications and blood… 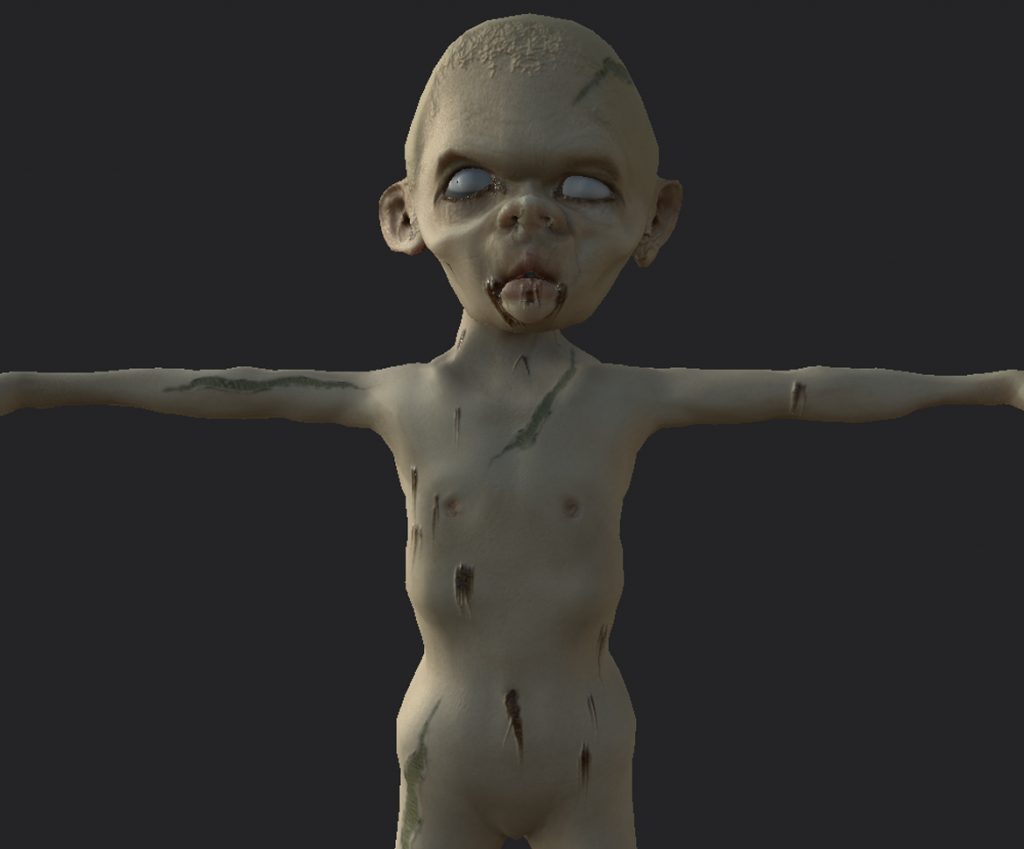 The next step was to add part of the skin that was deformed and destroyed by water and some more green parts that give the look of something placed in the water for a long time and is covered by water plants. 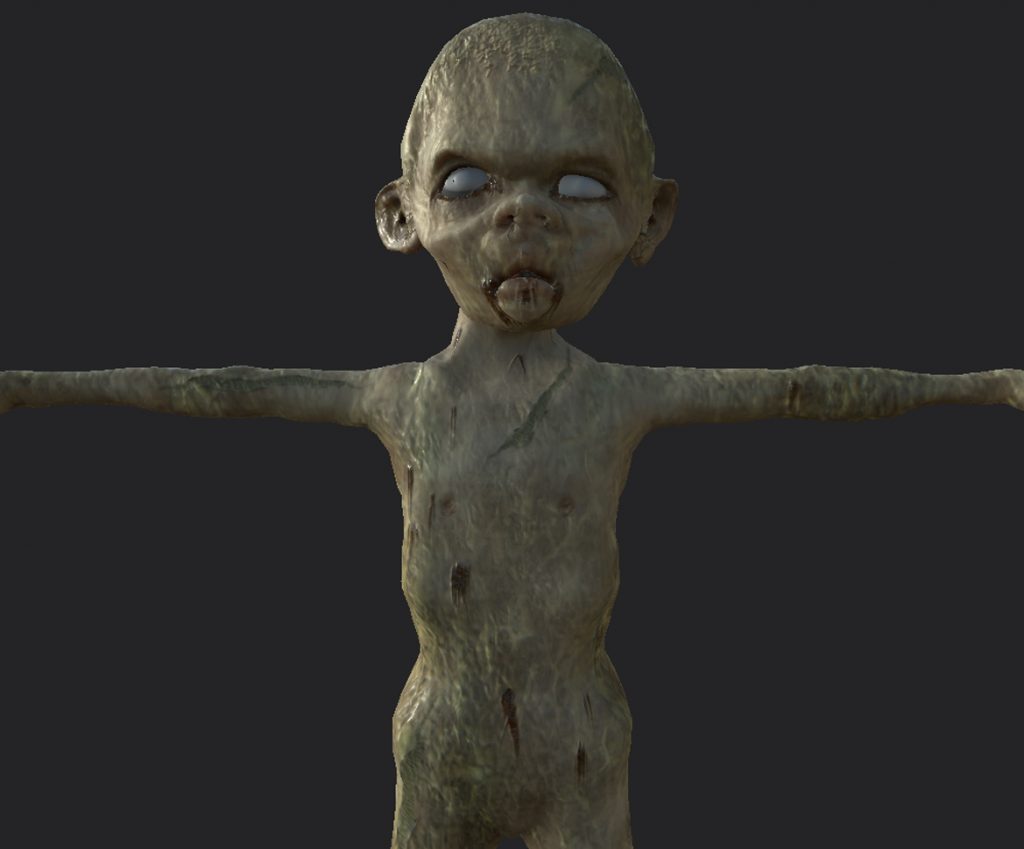 The last part of creating skin material was to add some monster’s mutations also here. We decided to use toad skin because “Child of water” lives in water, so this is something that could happen after it became a “monster.” In addition, we added some toxic liquid going from that toad skin (as You probably know, some of the toads are really toxic) 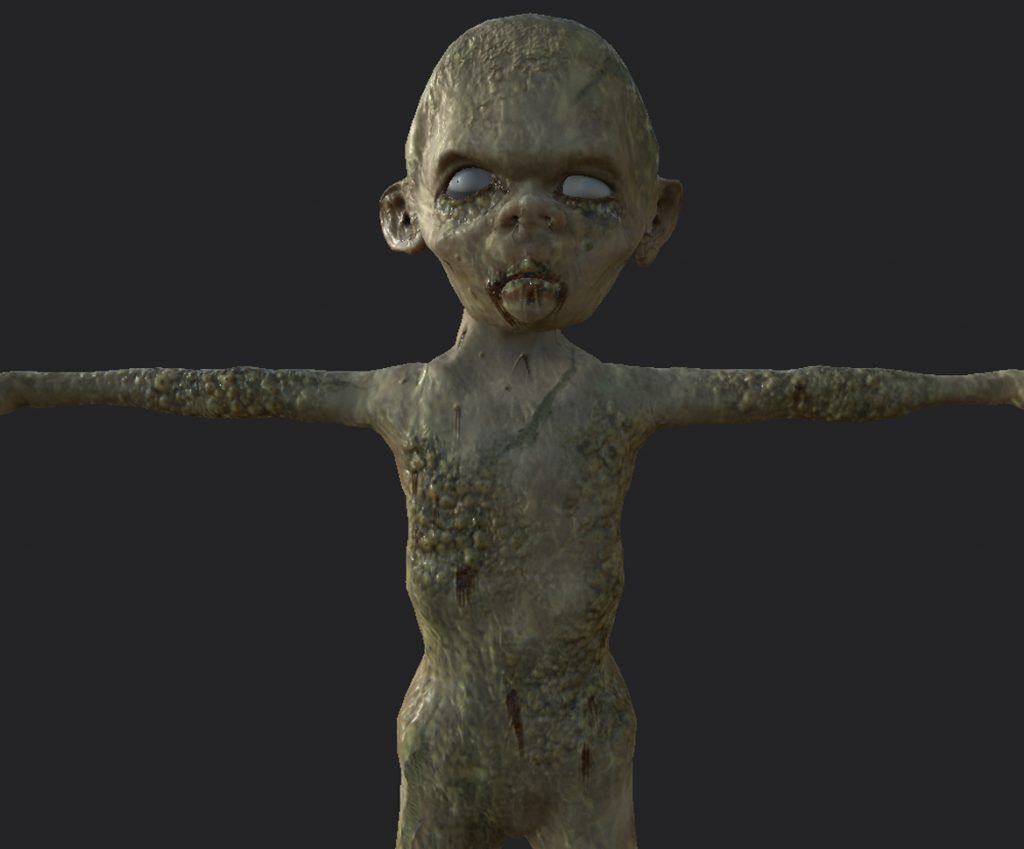 Last Stage – adding monster’s mutations – toad skin and toxic liquid on some part of the body.

Take a closer look at the head. As You see, it has purulent eyes, liquid going from the mouth, and many black veins, which gives the effect of the body decomposition process. 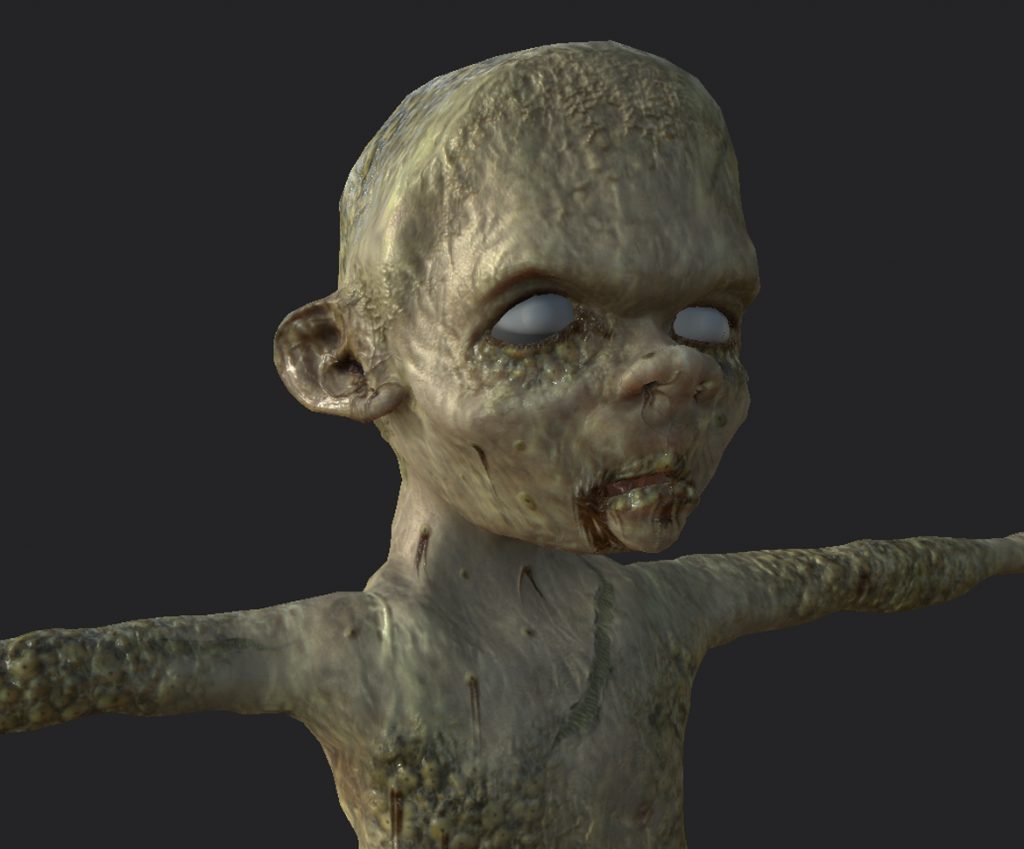 Veins going from the nose and ears, purulent eyes, and liquid going from mouth – final details of creating material.

Looking closer at the back of the head, You will notice similar to toad skin mutations. 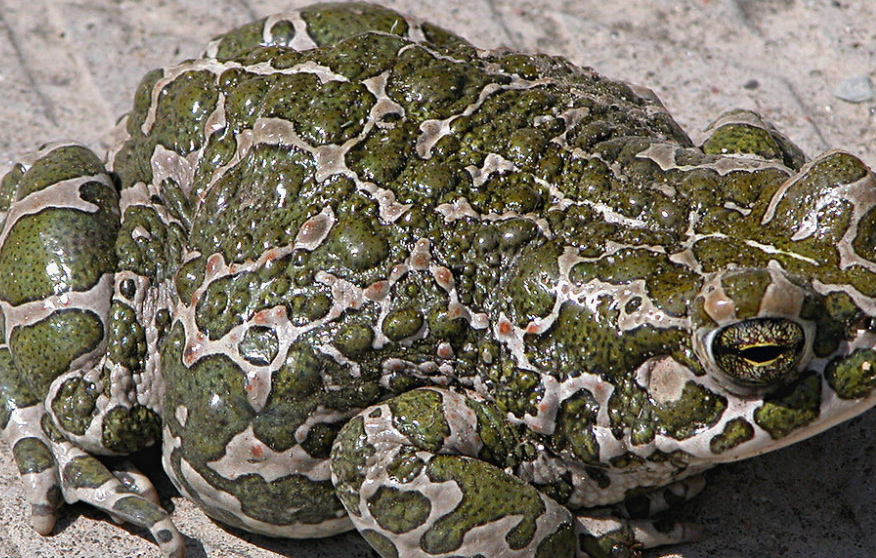 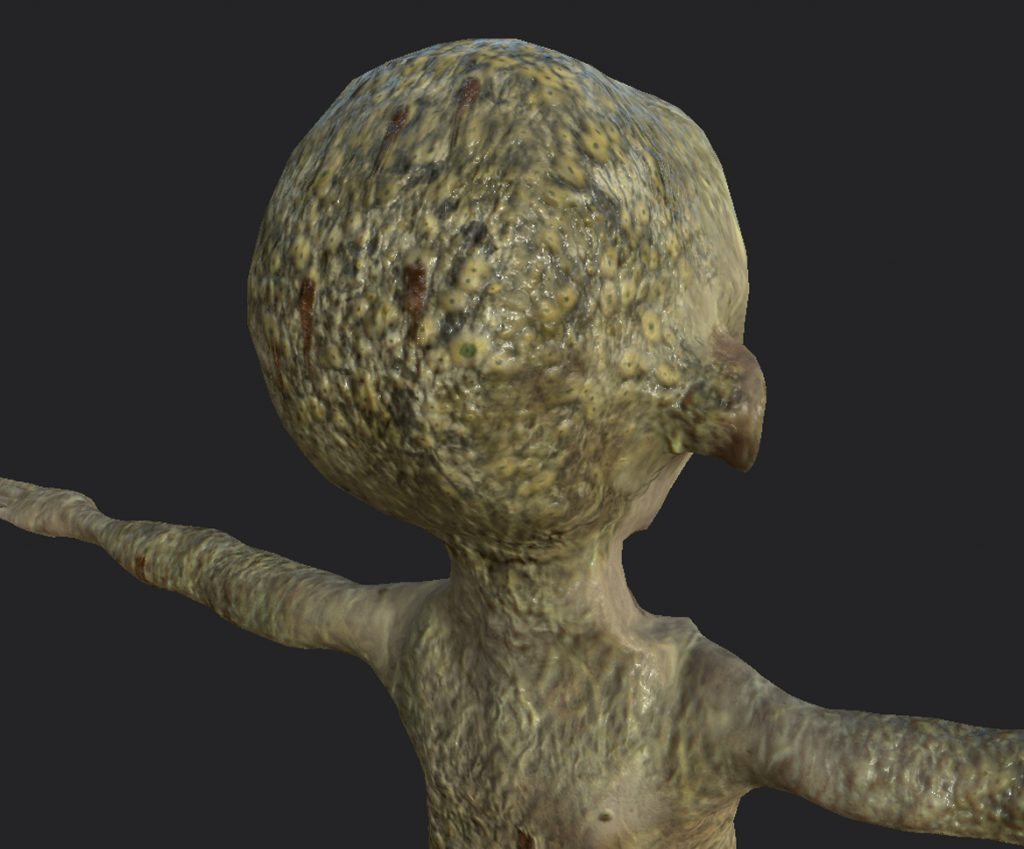 We decided to use toad skin material for some parts of the “Child of water” body to give it a more animal/monster toxic look.

4. Movements and Sounds of “monster”

Our monster thinks that it is still drowning. This is what we showed in mocap movement when Recording animations (You could check out some more footage from our mocap recordings on our Kickstarter Video)

Idle Animation – Movements of arms and hands are important here. It is not scratching anything. It is the movement of someone who is drowning and tries to come to the surface of the water.

Children of water not exactly attack; they are looking for someone who could save them (as they think they are drowning endlessly) (as You could see on New Teaser)

The next important part is face design but also giving it some facial animations. Notice that “Child of Water” doesn’t have teeth, only gums and tongue – this is, of course, because small children don’t have it too.

We used LipSync Pro System that we are using for all our characters to create really simple emotions and opening/closing mouth animations. We decided that it is enough for that purpose. We also selected to use human eyes but with the white cover on them (like “foggy eyes”), but this is something we are still thinking about, so it may be changed in the final version of the game. We applied this kind of eyes to show that this creature was a human in the past.

Simple Face, mouth, and eyebrows motion. Human eyes show that this creature was a human being in the past.

Here You could see the character in standing pose with face animations only, also in the same time, You could observe day to night light change test.

As we already mentioned many times, the main thing is that “Child of water” thinks it is still drowning. So in the sounds of a monster, we focused on making it sounds like a child that all the time is choking.

Also, the attack sounds like the creature would have a little bit of water in its lungs.

Ok, so the final thing is to talk a little bit about the size of “Child of water.” It has about 80 centimeters, it’s a pretty small monster, but As You probably noticed, it has toxic skin and what much more important there is a huge number of those creatures so they could kill an adult human easily. 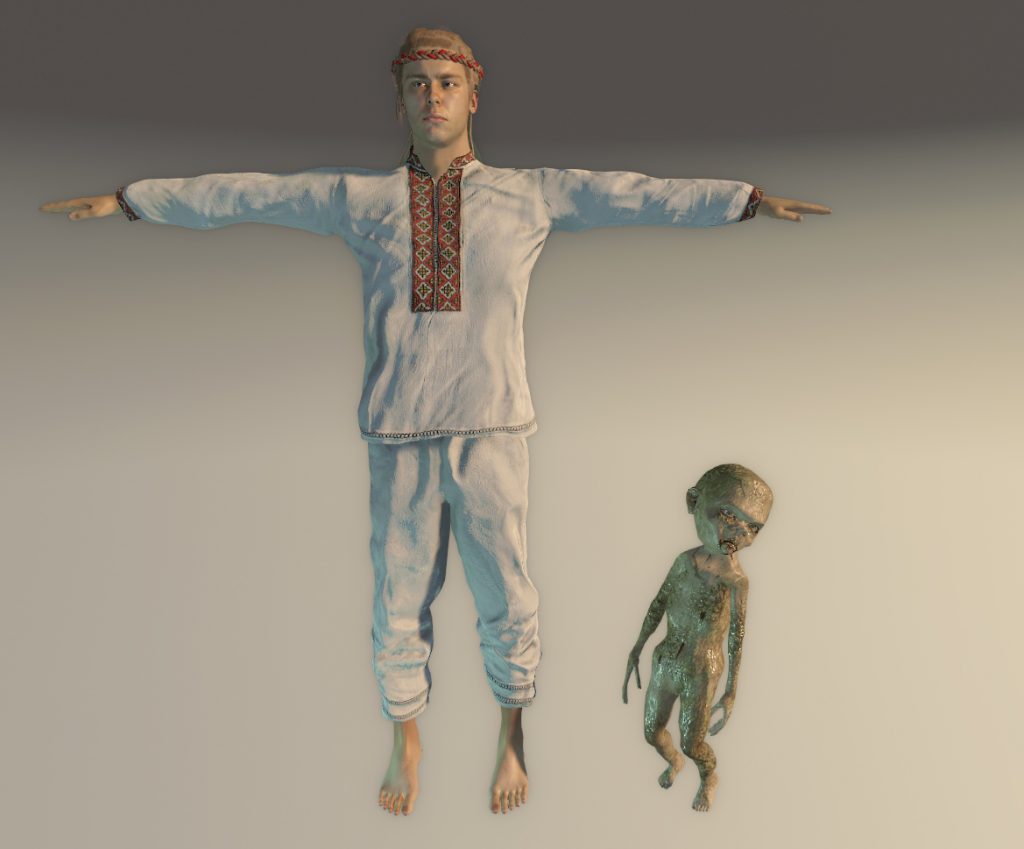 During the light test, You could see the shiny wet structure of its skin. (also a subsurface scattering of skin) 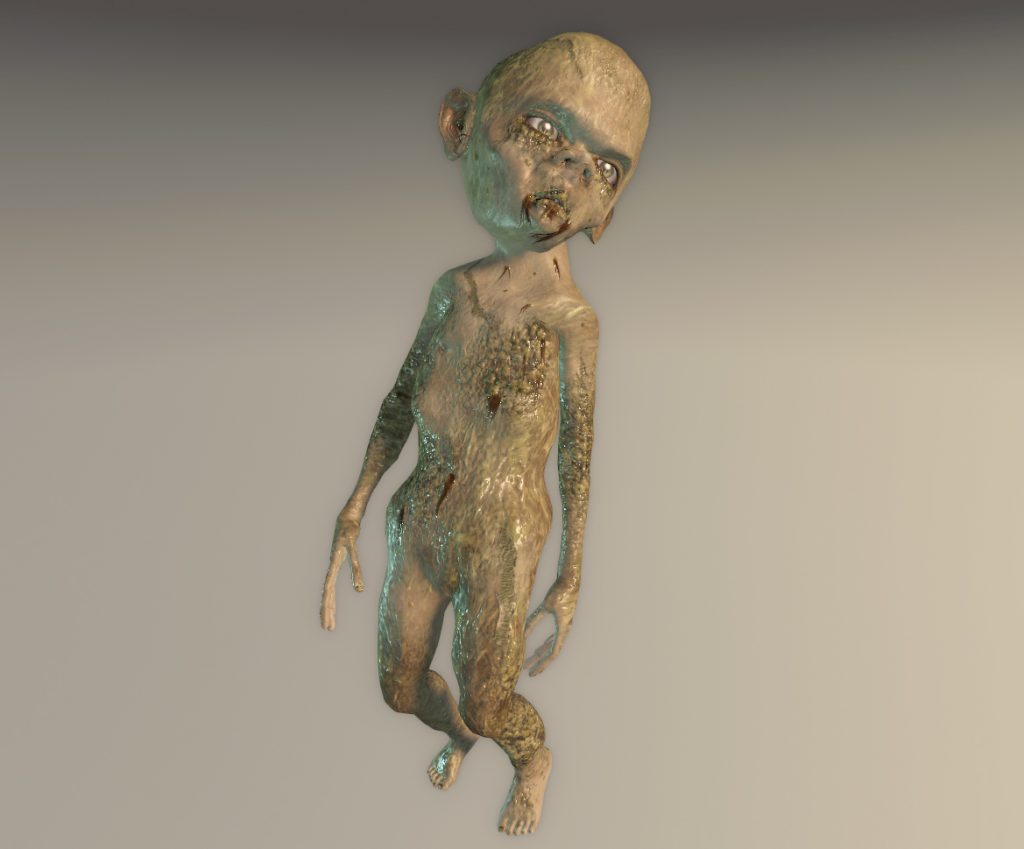 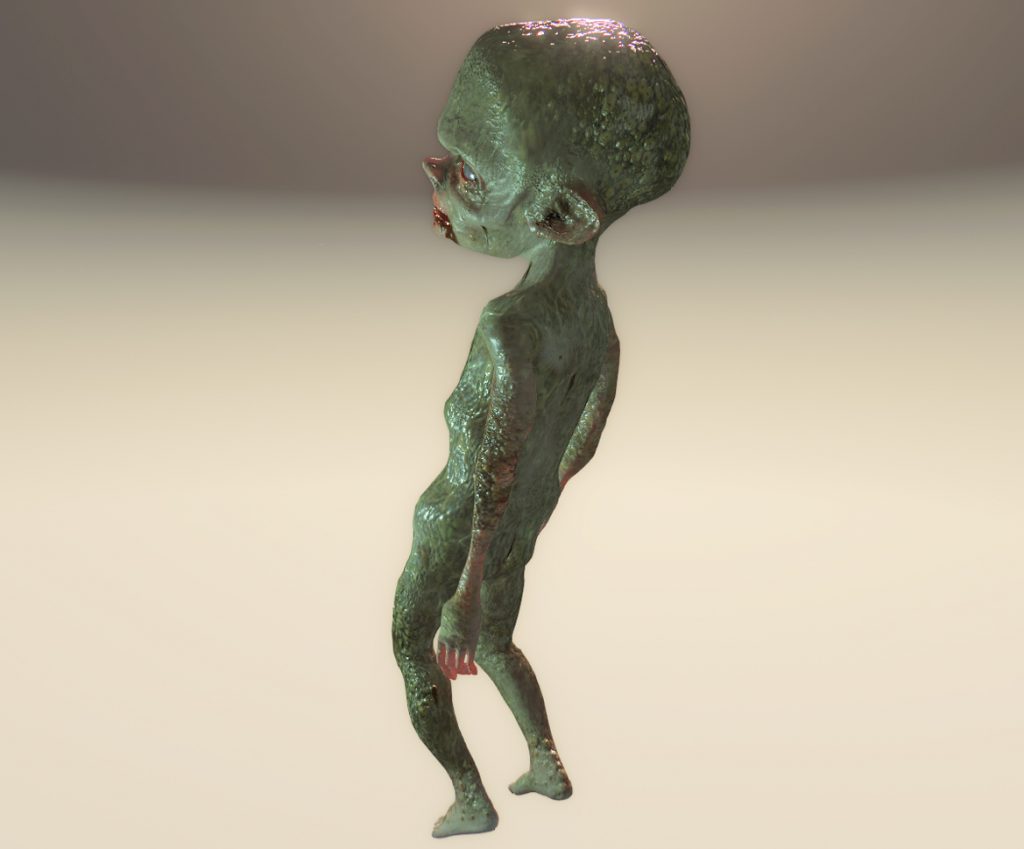 Of course, on Our New Teaser, You saw few different water children, this is because, of course, each of that children is different, so we had to prepare a variation of it by making modifications in its body.

Here You Could Check out New Teaser again. Don’t Forget to Share it with Your friends and leave THUMB UP on Youtube :)

We are a very small team, and we are doing all marketing on our own, so It will help us greatly :)

Also, don’t forget to ADD The End of The Sun to Your Wishlist!

OVER 7000 players already added our game to their Wishlists. You Could do it below : Store.steampowered.com

The End of The Sun Kickstarter has ended Successfully!

Now, as the campaign is over, we can offer you to pledge via Paypal and still grab some of the special Kickstarter rewards!