The End is near! Hooray! (I'm speaking of "Crazy Steam Bros 2" development, of course!)

Don't worry, nothing apocalyptical has happened (as far as I know). It's just I have completed the last level of "Crazy Steam Bros 2", so I expect to finish the game before the year's end. I need to create the drawings for the cut-scenes, and for the end of the game. Still thinking about the way to distribute it. I'm thinking to give the game for free, and if players like the game, let them buy the OST to support future games. What do you think about this?.
After a year of work, completing it looks so close and so far... :D

And a in-game screenshot of the last level: 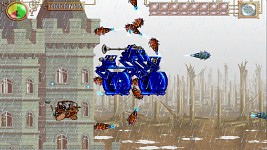