Post news RSS The disaster release that is Olvand violet

A long blogpost about EVERYTHING that went wrong while releasing Olvand violet.

Hi all, and the winner is... Olvand rose! I originally planned to keep the poll open a little longer, but I think the other options don't really make a chance anymore; Olvand rose is the clear winner, and so is going to be the name of the update I'm currently working on.

But back to its predecessor Olvand violet, because man... a lot went wrong there during the last week. My normal process is that I create a new build of the game, upload that to Desura, wait around 24 hours for Desura to accept it, and then invite the new playtesters. All together, this about an hour of work for me. Not this time :/

The disaster begins: no email
It started with the email service on the new webserver. I already complained about that in the last two blogposts, but to recap: most of Olvand web-related functionality, had come broken during a server migration. I only noticed this when I wanted to send out the new invites, and did a quick test to see if everything still worked. Hmm... no email. I did some further investigations, and it turned out that none of the email functionality of the website (players sending eachother invites, emails to change your password, etc.) worked anymore. A weekend of desperately trying to make email work followed, but with no success; whatever I did, there were no emails getting send. Finally, at a point where I was about to give up, I discovered the real problem: my friend had closed all of the server's ports, but forgot to tell me. When I opened them, emails were sent around immediately.

Well, send around, yes, but send to the inbox? No. Apparently, getting your server to send email is one thing, but getting email servers to trust the email is an entirely different beast. I spent even more days following all kinds of DNS and cryptographic protocols to give the emails a safer appearance. I saw improvements, but most servers and email programs (most notably: Outlook) still didn't trust me after days of work. So I finally found a workaround: instead of sending the emails from the server itself, I let the server make contact with my olvandgame@gmail account, and send the emails from there.

But unfortunately, this still didn't mean I could send invites, because gmail does not allow you to send bulk emails, and I'm a bit afraid to get my account blocked. But then I thought: how do other well-meaning individuals send bulk emails to people who are probably interested? MailChimp! It turns out that MailChimp not only allows me to actually send mail to people's inboxes, it also allows me to do so much more easily, and creates a nice HTML-email that looks much more professional. So all of this trouble led to an improvement in the end :) 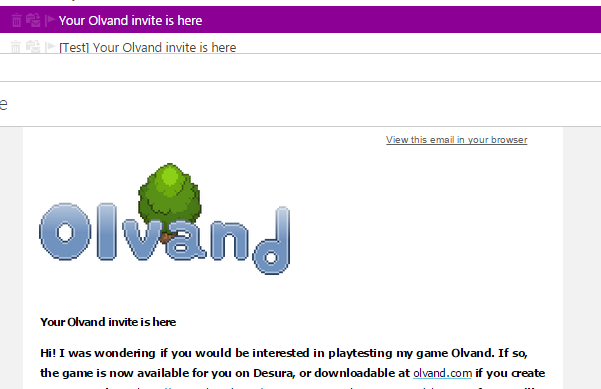 The next step is getting my own game server up and running. I again thought this would be a matter of minutes, but it turned out I created all kinds of new functionality that did not work well on Linux :(. Again, hours and hours of trying to track down the problem and then finding a fix for it followed. And then, when I finally got it working, the server did not show up here:

It turned out I had made a small improvement to a general part of the webcode base a few weeks ago that broke the code that registered whether servers were online. It had to be rewritten from scratch to get it working again. Like the email, it's better now, but I hadn't planned to spend so much time on it. Or on the code that registers how much players are on a server, or which achievements and olbs players have, because these functions all had to be rewritten too :(. 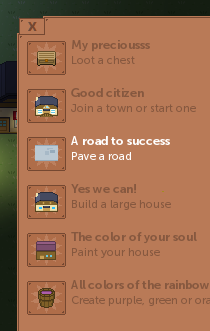 The invites are sent, but people can't play

Okay, let's send away these MailChimp emails! Like always, a few questions popped up on the forums of people who have graphics card I don't support yet (it's improving with each update, I have now about 95% of the cards covered!), but there was one request did I found a bit weird: this playtester could launch the game and log in a stuff, but got a graphical bug once he/she tried to build a house. I tried this myself... and my game also crashed. At this point, I had real trouble staying calm: building houses is essential to making progress in the game, and I had just invited 200+ new players. That is 200+ players not being able to do the most essential gameplay.

An evening of staying up late and getting up super-early of trying to find the problem taught me that I had made the stupid mistake of talking to the video card from two different threads (if that means anything to you), without realizing it. Removing this mistake fixed the problem. I made a new build, did some quick tests, uploaded it to Desura, and went to sleep.

The next day Desura had already accepted my build, so the first thing I did after waking up was upgrading the game and see if everything worked... but the game did not even launch. My inbox almost exploded of highly confused people who thought there was something wrong with their computer. I still don't fully understand what went wrong there, but for some reason the files that Desura distributed were corrupt. Uploading another build finally, finally fixed the problem.

And that finally solved it. I can't describe how relaxed I feel now :). Here's a little town people built on my (now working) development server: 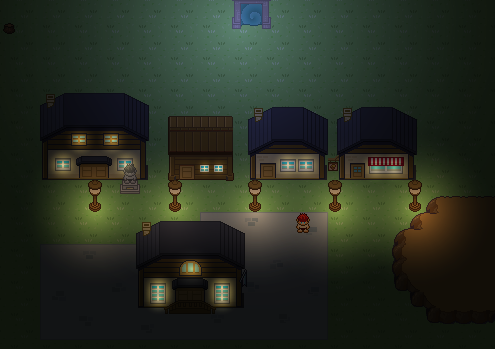 Finally, a programming note. Because I've noticed that some times I spend more time writing these blogposts than actually working on the game, I decided I'm going to switch to a two-weekly schedule at least temporarily. This means you still get regular updates, but without it slowing down the game development so much. See you in two weeks!

keep up the great work.

Hey, I can understand your frustration. I also had some dumb bugs which were crashing my game on start, and I had to spend hours for debugging to discover that it was just a mistake in a config file...

I would say that this is part of a game's development, and while most of the time it's all about fun, there are always moments when suddenly everything go wrong and you just say wtf?!

But we have to overcome these problems and frustrations to keep doing what we love, creating video games !

Good luck on your projects

Thank you for this peptalk - I really could use one! :)

Push on my friend, you are doing great :D