One of the biggest updates since going standalone! 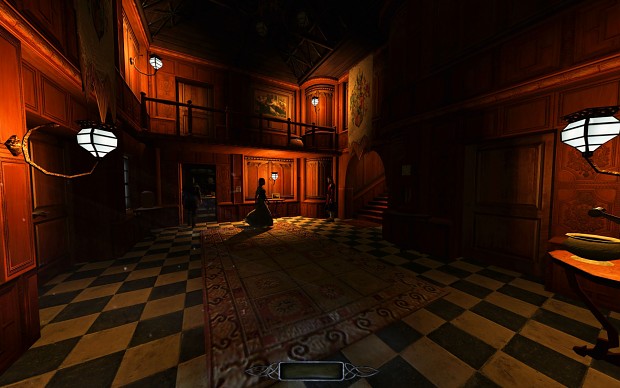 The team at Broken Glass Studios is very pleased to announce the latest update to TDM!
The update to 2.03 adds nearly nine months of new assets, features, and bugfixes. Some changes will be noticeable right away, while others will take a while to appear in new maps.
To apply the update, simply run the tdm_update.exe file in your darkmod folder. (Note that saved games from earlier versions will not be compatible with 2.03, so finish any missions you are playing first).
Some of the improvements are listed below. To see the full changelog, go here. 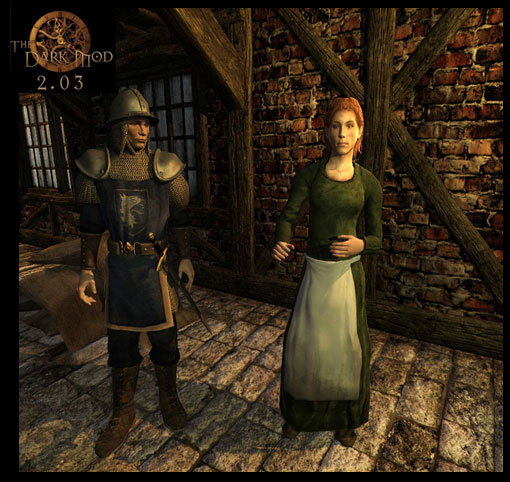 AI changes: AI have a few new animations, including a new pickpocket reaction. Many AI, including the citywatch and builder models, should look more detailed, as most AI are now using LOD (Level of Detail) stages, allowing greater detail up close and less detail (and less of a performance hit) when further away. In terms of behaviour, AI will now coordinate their searches more intelligently when in groups, sending some AI to guard doors and choke-points rather than stepping all over each other. AI will now react when getting hit by an opening door. An issue that allowed AI to see behind them if their head was turned a certain way has been fixed.

Graphics: Particle effects have been greatly improved, so that they no longer create hard lines when intersecting geometry. Water no longer distorts things that are in front of it, and the skybox will no longer flash grey when the player is mantling. The spyglass will now appear round regardless of the screen dimensions used. A number of entities are now using LOD (Level of Detail) stages. You may wish to adjust this option in the Graphics Menu if you see noticeable ‘popping’ of models.

Revelator, a veteran in the Doom 3 mod scene, stepped in to help our new engine coder SteveL with some of the code needed to gain access to the depth buffer. We hope to continue our partnership with this crafty fellow.

A video preview of some of the new features can be viewed below:

Overall, you should notice a distinct improvement to the graphics and AI behaviour in maps. And we have some exciting renderer developments in the pipeline, though that will have to wait for the next update.

Since v2.02 several stellar missions have been released including:

For mods that i think look really promising, I don't really like to play them until they're in their final form because I feel like I'm wasting your work if I play through it in an unfinished state.
Does anyone have any idea what the version number of the final release will be, or if there is a date set way off in the future for a feature freeze?

We've been pretty much feature complete since v1.06. Everything beyond that has been optimization, refinement, and enhancements which is something we plan to continue doing. That said, the next release (v2.04) is planned to have some big architectural changes and visual enhancements and beyond that I am thinking that the releases will taper down in terms of scope.

If you are asking about an "official campaign" there are some plans to bring at least a few of those to fruition.

That said, you can play the entire 7 mission "Thomas Porter" from start to finish "right now". (Sotha is now a team member so that is as close to official as there is.)

I have question: what about the Crucible of Omens; is that still being worked on or has it been put on hold?

There is some ongoing work there but progress is slow. The William Steele series is still very active and was waylay-ed by v2.03 development but Grayman will be less active for v2.04 coding so he'll have more time to continue there.

Does pickpocketing a guard cause them to turn the head immediately & comment on having a missing key? I thought that was weird and only seemed to happen when you pickpocket a guard while hes walking, can anyone confirm how this has been changed? The Video doesn't address that.

Do you have hearing set to hardcore?

If you make a noise while pickpocketing, they'll turn right away. Otherwise they may or may not notice a little while later.

My tdm_update.exe is not working. I have windows 8 64 bit

Make sure your darkmod folder isn't set to read only.

Thank you so much, awesome work guys!
Good luck in future, looking forward to see more updates and missions.

I had trouble using the TDM updater (I was running at version 2.0 still). Kept getting an error after it failed to finalize the download from all the servers. Only way I could it to work was to delete ALL the TDM content and let the updater start from scratch. Worked like a charm then! Everything looks great this far :-)

For being just a mod of Doom 3, this has really turned into a fantastic looking standalone Thief game. I personally find myself preferring this to the official Square Enix one.

Awesome! Definitely getting back into TDM now!

wow...this si simply great...so with this version we don't have to had Doom 3 installed? are the old maps compatible or we need to wait a bit when\if the creators update their work? there are mission avaliable in the base mod ? thanks guys it's amazing, expecially seeing what devs done with thief 4..it's unplayable for bugs\performance issues.

This one looks amazing... good job!

You should have called it "The Dark Game", considering it's standalone now.