TDM v1.08! The first Dark Mod release to include it's own engine. A major milestone for the progress to a standalone release. 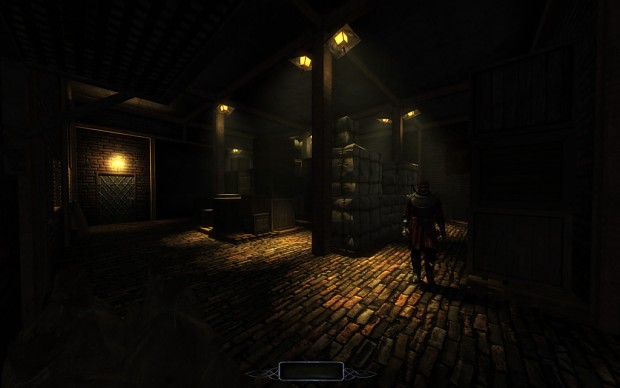 Good things come to those who wait...

On the 3rd year anniversary of The Dark Mod's official release, comes a major overhaul of game-play, AI, sounds, animations, visuals, and performance. The Dark Mod v1.08 represents a major milestone with The Dark Mod shipping it's own "TheDarkMod.exe" executable built from the Doom 3 GPL source code. It also represents a major evolutionary jump with significant changes to gameplay related AI and physics behaviors.

Prepare yourself to be surprised by the improvements!

The 1.08 update contains nearly a year’s worth of updates and
improvements...

So many, in fact, that it’s hard to remember them all. Some of the improvements, like getting TDM ready to go standalone, are fairly transparent to the user. Others will have a noticeable impact on
your game.

IMPORTANT: Because of changes to the way TDM is run now, (in preparation for going standalone) the first time you run TDM 1.08, you will need to reset your keybindings and other settings. Additionally, “tdmlauncher.exe” no longer starts TDM. Users will need to change any shortcuts to darkmod/TheDarkMod.exe, in Windows, and thedarkmod.x86 for Linux users. As always with an update, saved games from earlier versions will no longer work, so finish any missions you’re in the middle of!

While The Dark Mod is not fully standalone, many missions will run without Doom 3 though they will be missing textures, models, effects, etc. The work to become fully standalone will be ongoing but may be completed sooner than expected!

The Dark Mod does not work with Doom 3 BFG Edition

(No Doom 3 mods work with BFG edition as it doesn't support mods.)

Vanilla Doom 3 is currently available for sale at GameFly:

According to the following article, vanilla Doom 3 will be returning to Steam:

...should provide a much more immersive sound experience. We’ve added over 200 new impact sounds, as well as two new vocal sets. Many things that used to be silent now make appropriate noises. Falling bodies now make impact sounds, arrows have sound as they whiz past you, and AI make rustling noises as they move based on what they're wearing.

The lightning-fast reactions of AI have been toned down, so that they don’t leap immediately to combat after a half-second glimpse of you down the street. AI now react to things getting thrown at them, and can be knocked out by heavy things being dropped on their head. AI are smarter about using elevators and will use them while searching now. Several new AI character models have been added, including the Builder Acolyte and the Elite Citywatch.

Additionally, the Training Mission has been revamped by Bikerdude for
1.08

...with a few new sections and beautiful improvements to the visuals. The team’s second demo mission, The Tears of St. Lucia, has also been updated for 1.08 and is now included with the mod by default.

There have also been dozens of new art assets added, an entire series of new light entities, improved flame particles, performance improvements, additional animations, fixes to some physics issues, and
well over 100 other bugfixes.

You can see a full changelog here: What’s New. To get the update, simply run tdm_update.exe in your darkmod folder. If you’ve never downloaded TDM before, visit our Download page for full
instructions: Download Thanks to our new coder, Taaaki, who did a great deal of work on this
update preparing TDM to run standalone. And special thanks to grayman, without whom the update would never have happened at all.

Great update, that reminds me to get into that game again.

I can't wait to download 1.08 and play new missions.

time to get back inhto action, thank you so much dark mod team!

I really want to play this game but don't want to buy D3. I am so waiting for the standalone version. Videos and images are looking top-notch!

1/ install Doom 3 demo.
2/ rename it's "demo" folder to "base".
3/ Move it above your darkmod directory (or move the "darkmod" directory next to it). You should now have a structure like:

You may be able to play some FMs without undeads like (deceptieve shadows, house of theo, VfaT1, old habits) but other won't work (like blackbog, in remeberance, in the north, let the sleeping thief live)

Whoa. I totally forgot I owned Doom 3 specifically for playing this mod on steam, but forgot about the mod itself! Silly me! Downloading now.