For this update we wanted to talk about the Crag, the first of four different alien structures the alien commander will be able to build in NS2. It will be available in the next patch update.

For this update we wanted to talk about the Crag, the first of four different alien structures the alien commander will be able to build in NS2. It will be available in the next patch update. 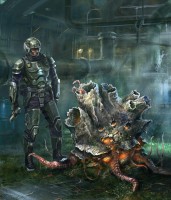 The Crag fills the role of the Defensive Chambers, from NS1, providing Commander-researched, player-purchased, defensive-oriented upgrades. For example, Carapace (late game armor) and Feed for Skulks (health for eating corpses) and Bacteria for Gorges (upgraded health spray). The Crag’s bony shell helps serve as natural protection, making it one of the toughest alien structures to kill.

Unsurprisingly, the Crag's passive ability is Heal. It automatically heals nearby alien players and structures, ala the old DCs from NS1. Its Triggerable ability is Umbra (sound familiar?), which when activated by the commander, creates a particulate cloud of gaseous smoke which pours from the holes in its shell, and fills up the surrounding area. This temporary cloud intercepts and disintegrates bullets, allowing through only half of the shots fired by Marine ballistic weapons (doesn't affect flamethrowers, grenades, MASCs). 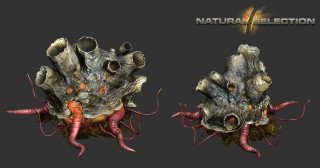 The Crag's late-game "targeted" ability is...Babblers! If you played early versions of NS1, you may remember this fun but unrefined feature that allowed Gorges to spew out small creatures (they were scaled down Skulks running the Half-life Snark code!). Well, we are bringing those back, but making sure to give them their own model this time around. In NS2 they are controlled by the alien commander, who will unleash a multitude of these small cat sized critters from the various openings in the Crag’s shell which swarm around Marines, obscuring their sight somewhat, slowing them down and inflicting a small amount of damage.

Below is a sketch page showing a variety of possible designs for the look of these small creatures. We’ve narrowed the choice down to a few favorites, but have yet to decide on the final direction to go in, so we would love to hear your thoughts: 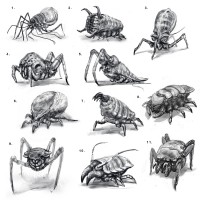 Of course the Crag is still in development and subject to change as we see how it works in-game, but we think we've got a good start. We hope you enjoyed this update and stay tuned for more alien structure reveals!

Talk about it in our forums!
104 Comments

Number 1 or 7 all the way! The rest looks either too funny, or too "real" xD

yeah, that was my thought too...but to say the thruth, all are looking great^^

neat, digging the design and how it feel almost like a coral reef

as far as the babblers, 7. and 8. silhouettes really catch my eye. I also fond of 10. due to giant isopod like frame, with some sun spider pinchers, and be set. ;D

Wow, great news. And as for the babblers, I like number 1 and 9 the most.

I'd say number 1 would most likely pop out from one of those things. And number 6 looks like a tick. I hate ticks <_<"

8 looks like the hive bugs from starship trooper chronicles

7's probably the best suitable one

Not sure what you guys see in 7, but I'm thinking take 6 or 3, and add a sun spider head and pincers to it, and you'd hit it on the spot. I'm thinking of playing off all the insect-like things that give people the creeps: huge jaws, long spider-like legs, bulbulous ticks, long antennae, lots of eyes, etc.

#1: More scuttley and not really something i would want to have nibbling my flesh off. As well as the idea of seeing one of them exploding with guts everywhere would be epic!

#8: Looks more like a bug, if it were longer it would be VERY disgusting!

#9: Looks like a fast paced creature and wouldn't be very easy to hit so that would make them even more annoying!

#10: If there was a stronger creature type i would choose this as it's much stronger looking but wouldn't be very fast I'm guessing.

babblers !
we missed those :D

Looks quite interesting, waiting for the next update then :)

I'm liking 1, 2, 6, and 7. 1 and 6 seem like the kinds that would scurry around and pounce and latch onto your face or something (though 8 and 10 seem like type too). 2 and 7 are just badass in general and remind me of Oddworld; the Slog and Slig, respectively.

No. 1 is the best one, because if its thin legs it looks kind of creepy... I like it!

2 looks like it would be incredibly difficult to get off you if it latched on. 4 is great though, its face is so disturbing that I'm sure that they'd be good decoys or panic players, which is the point right? :D

Everyone of them has a very nice a uniqe dessing. If you are going for a horror / nasty bug look, i would choose number 1 due to the small spider-like legs and body. It would look cool comming crawling down the side of the Crag and the on the floor.

If you are looking for a beetle / more aggressive looking bug, i would go for number 8, due to it compact body and head. The dessign itself is pretty good and makes it look more tough and able to couse alot of damage.

These where my favorrite ones..

But i would definetly say that all of them looks very awesome..

6 and 8 look like they can't jump or move quickly.

On a side note: EW EW EW EW i hate barnacle looking things. I'm gonna have to find a custom model for that cuz its so gross looking i'd attack it if I was an alien. umphumhphphm ack!

11 looks preety cool. Others look like some kinda of mutations of spiders

Why don't you put every designs into game? Most of them look like they can function some other new rolls

They have to be careful about how much resources the engine is using.

I want all of 'em. Why can't they spawn randomly like SC2's Dark Templars?

I would have to vote for number 8. I like it the most out of the ones shown.

can't believe 3's not more popular. no one likes his huge bulbous eyes staring at you and that huge translucent sack atop his head? he looks like that monster that got scrapped from half life. mr friendly or something.

ALL OF THEM ARE GREAT.