This week I talk a bit about how the versus mode works, my plans for the month and some small tweaks to the scoring system.

Update time! I hope you all had a great new years!

I've been celebrating the new year by making some more tiny buildings. My original plan was to get a large chunk of them done this month, but I've also been caught up with re-coding/re-designing some of the game's internals. I may continue that and save some more building work for the coming months. Either way I'd like to get the building count up to 100 at least by February.
Versus mode is still going well. This week I've revamped the scoring system- it's a bit slicker and clearer. It now displays your total + score in the middle of the screen for a brief amount of time and also explains how that number is reached. Currently it's the number of points in the column squared. I chose this way because it rewards creating a high scoring building as opposed to just making the target, and in order to do that you've got to take some risks with your building placement. It's also a technique I used in the original MegaCity. I've got some plans to revamp the residential buildings too, but I'll talk about that at a later date.

The way the versus mode works is the two teams compete for each column. They take it in turns to place buildings- currently 3 per turn although this could change. The buildings are then owned by that team- so a house placed by team 1 will collect points in the column for team 1. But the surrounding effects are global, so you can positively and negatively effect each other's buildings.Each team has their individual target- the first to pass their target 'wins' the column, which means they get all the points in it (whether from their own buildings or the opponent's). If both teams are above their target, the highest score in the column wins. If both teams are below their target and the column fills, it automatically clears and score is divided up according to the point ownership in the column.

To stop any + points being immediately cancelled out by a - from the other team, I've also introduced a 'land ownership' system. If a team owns a tile, only they can place their buildings there. Right now in testing I have it so top 2 rows are 'owned' by team 1, and the bottom 2 owned by team 2. This leaves the middle two rows as a kind of free-for-all territory where either team can place their buildings. I've also made it so the left (column in play) automatically removes ownership on empty tiles.

I've found this to be a good balance so far- it gives each team just enough room for their buildings to interact while also having a 'safe' area where you can build your points. I'm also testing with other ownership setups- having the owned land in the middle rows etc. I expect I'll have it variable in the full game too, as changing the automatic ownership rules changes how you play the versus mode quite dramatically! On top of this it also opens the door for versus-specific cards where you can grab land off each other!

I'll sign off for this week with the latest building- the Zoo! 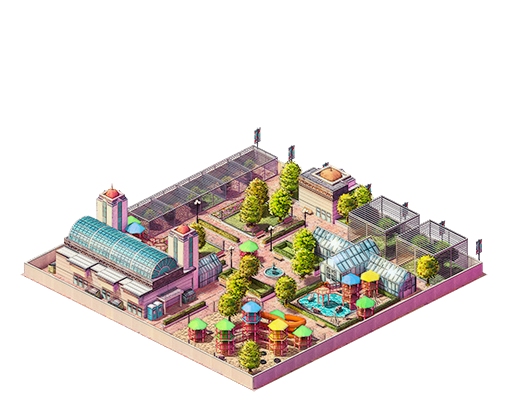