A five map release with a few improvements, such as a "colored" status bar and confusing source code.

Yet another update has been released! The new update, alpha 1.1.1, includes as little new features a game developer could implement in an update. Such as:
* A colored status bar
* Another level
* And fixed controls 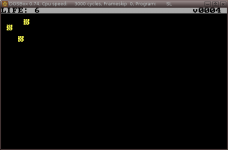 Of course, this include the few things alpha 1.1 added, such as:
* A step counter
* 4 Levels
* And source code included in download

You can download alpha 1.1.1 in the download section
Also you will most likely need DosBox which can be downloaded here