Post news RSS The City of Darineth in the Early Morning

The Ilsamir Capital begins to stir, and the streets are yet lit with torches and lamps. The market will soon commence.

"Torches and lamps lit the streets of the great City as a few keen stall-holders arrayed their goods in the chilly air. Tiny eddies of wind stirred along the dusty street and rocked the signs that hung from the shops. Udeval passed it all by, for his errand was not with merchants and he had little time before the Sun showed itself." - from the Tale of Udeval 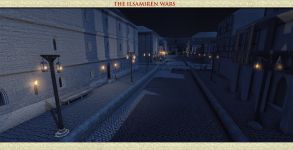 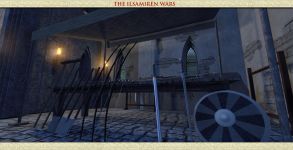 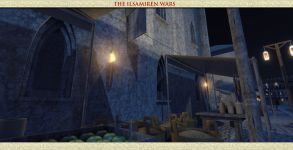 A lamp-lit street, the stall of a smith and of a grocer


These images show the latest progress on the Ilsamiren culture. The Ilsamiri rule wide and fertile lands, and those territories which they do not claim outright lordship over are still strongly under the Ilsamir influence. 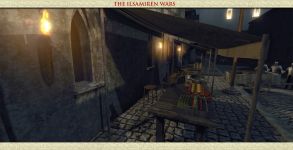 Light grows in the city

The greatest steps forward in the development recently have been in normal mapping and the refinement of texturing in general. These images show the results of that progress when combined with the powerful particle and lighting systems of CryEngine2.

I think the torch lights bring out the look.

Need a few bump/normal on those bricks at the flor and ground, I think you can save the POM, no need for it.

awesome job on all of it!! you guys have really been working at this!!

Looks good and sounds good, particularly the amount of detail.

I think the only thing is that for a night shot there's too much light, especially ambient light.

It's kind of night/early morning, but you're probably right. I'll look into it :)

Perhaps the best thing to do is use some reference images. Check out some 3D art set at night time (say, on CGSociety) and see how they light the scene.

Normal maps/specular highlights are essential to bring out more detail, reflecting the moon at whot-not. Dark shadows and unlit areas shouldn't be too much of a problem if HDR is used correctly. ;) Keep up the good work.

This mod is coming along really well. Great work!