Work started on the openings animation scene, where we find out what the Black Duck army is up to this time! Also weapon visuals, and casually throwing weapons.. it's been a great week of Gunslugs 2 progress! 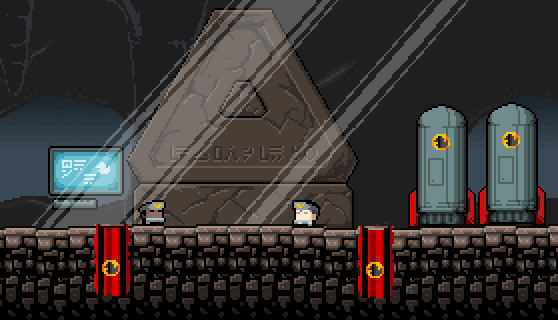 And another week closer to releasing Gunslugs 2 ! This week was mostly about doing more small changes and tweaks that polish the final game, and also adding the opening animation that basically sets-up the game story.

First of all, I've also been doing some updating and work on my other games, as this week saw the one year anniversary of Heroes of Loot (actually, TODAY!) and a cool way to celebrate that is by having it in the latest mobile Humble Bundle! so if you still haven't tried it, this bundle could be a great way of getting your hands on the game and a few other awesome games in the process.

But back to the game that is currently keeping me from goodnight sleep: Gunslugs 2..

So using the game-engine and all the stuff that I've added to it, it was remarkably easy to get some cool stuff going for the opening animation. I'm fearing that it might annoy some people due to it being slightly longer than my usual animations, but I hope they'll soon forget about that when they are dropped into the actual game.

Besides the animation is only "forced" on you once, and you'll never have to see it again after that!

I've also been working on the weapons, and I decided to visually show which weapon the player is holding. This turned out pretty cool, especially when you are carrying a rocket-launcher which is basically as big as your head! But the flame-thrower also looks pretty sweet as you carry it on your back.

To make all that even cooler, I also made the slugs "casually" throw away their old weapon when they pick up a new one.. it really looks cool!

Further more a bunch of little effects have been tweaked, improved, and added (like a muzzle-flash when you shoot).

I'm now slightly worried that the game is becoming a bit on the heavy side for slower android devices, there's really a lot of stuff happening on screen.. but I'll do some tests later and see how that turns out. Most 2012+ devices should have no problem running it I guess.

Let's just wrap up this post with a sneak peek at the openings-scene, and get back to work!