Thanks to all of you who have pre-ordered the ultimate tactical game and are now playing the beta: we take a look inside to see what all the fuss is about...

First off, here's a very cool unofficial promo vid made by Schaulustiger, a member of our community:

There's nothing like logging in to a game you've been making for ages and seeing a load of players on there even at some mildly obscure time in the morning! 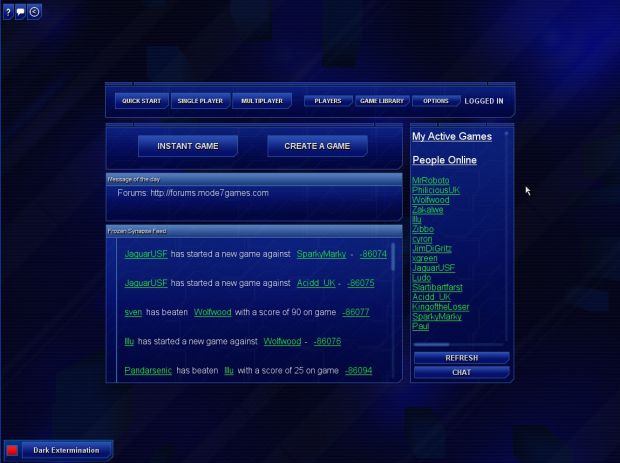 Here's a silly video we made exclusively for the extremely nice folks over at Eurogamer. Ian's working on a load of bug fixes and tweaks (as well as juggling some contract work - he is a hero) at the moment - these will all be in our first update which we hope to get out this week. He's also going to be adding some new features - if you're interested in these then take a look over here on our forums.

Q. What's this game all about?
A. It's a simultaneous-turn-based tactical game! You should try it.

Q. Is the game going to be on Mac?
A. Absolutely yes. The Mac beta will be up and running soon; if you pre-order, you will get both versions.

Q. Is the game going to be on Steam?
A. We would very much like it to be, and we're currently doing everything we can to make sure it'll be on there. If you'd like to support our efforts, we suggest posting in this thread.

Q. Is there going to be a big single player campaign?
A. In the current beta, you can play Skirmish against the AI, or a special single player Puzzle Mode. Our plans are to finish and polish this mostly-multiplayer version of the game, then work on an extensive single player campaign. We're only three people, so this can't be hugely over-ambitious, but we have some interesting plans and we're going to work hard on something that fans of single player strategy games will enjoy.

Q. Can I help you guys out?
A. Yes! We desperately need people to post about the game on any forums that they're a member of and to contact any news outlets that haven't already covered the game to tell them how great we are! We'd absolutely love to get noticed by places like Destructoid and Penny Arcade, but they're obviously both sites that get *swamped* with contacts from indie game developers. A lot of our pre-orders are coming from word-of-mouth: people googling the game and arriving at our site. That's AMAZING at this early stage and we're really grateful to anyone who has mentioned the game.

That's over with! Here's some more general stuff... The game is proving popular with podcasters: we've been featured on Rebel FM and Gamers With Jobs recently. We've also had a lot more press coverage, including this very nice blog by PC Gamer.

I'm currently working on trying to get some of the bigger sites to notice us; Ian is slogging away at bugs as I mentioned. We're hoping to get a chance to meet up and focus on some of the aesthetic stuff that needs doing this week.

It's great to have people take notice of your game, but it really shows how far we have to go in terms of reaching our potential audience. We're gearing up to get the word out any way we can (hopefully going to be entering the PAX 10 and the IGF this year); our YouTube export feature has been really popular - there's over 700 videos of the game on YouTube now which is definitely helping to spread the word. That said, we think there are hundreds of thousands of you out there who would enjoy this game, so we've got to keep working!

Oh, and if you're a fan on here, you really should be a fan on our Facebook pages as well - we've started to do quite a lot of...um, basically incredibly silly things over there and we're aiming for 500 fans very soon. Also videos of ponies.

MANY thanks to all of you who have pre-ordered already: we're incredibly grateful and we promise to keep working as hard as we can on the game to make the full version fulfill its potential.

Interested in the game? Grab a pre-order and start playing TODAY! You'll get a free copy for a friend as well.

I really want to pre-order but it's a bit expensive for me :(
The two for one deal is sweet though, might go for it soon.
Just a question, rockets look really OP in the videos. How much rocket spamming goes on?

Heh, we just use the rockets in the videos a lot as they're the most dramatic unit!

Rockets only explode if they hit terrain, so you have to strategically place them. They're only one element of the mix of units - there isn't really rocket spamming per se, it's not really that sort of game.

A good player can *easily* beat a weaker opponent who has more rocket launchers than him - it's all about how you use your units.

Yeah, I preordered purely because of the 2 for 1 deal.

You guys should run it for as long as possible.

Thanks *very much* for pre-ordering! We really appreciate it. We'll try to make the best possible decision about how long we run that deal for.

Cool video guys, I'm trying to make my parents buy this for me, just wait and I will buy it! I PROMISE!

What about a Linux version?

We're not currently planning one (sorry), but it does run perfectly under WINE, we're told.

Are the "unit down" sounds in the game?
They're kind of annoying.

Also can you have an option to change the color scheme? The background looks awesome in grey.

Those sounds are in the game - a lot of people like them, is all I can say! All sound is currently WIP though.

Yes, we do like that grey background - I'm trying to get that in there in future. In the latest update, you can change the colours of the units if you so wish.

Perhaps you could have an option that would let you "switch" between a few schemes. I really, Really, REALLY liked the early beta grey-ish blue color scheme and the not so early beta UI.