Built as example game for Epic Games' Unreal Development Kit, The Ball UDK Demo is a stand alone 40 minute long demo of The Ball running on the latest version of the Unreal Engine.

Over the past few months we have been working on porting The Ball over to Epic Games' Unreal Development Kit. That means a stand alone build of The Ball, running on the very latest version of the Unreal Engine! We'd like to thank Epic Games for the great opportunity! Check out our page on their official UDK website.

We built a demo that contains two levels. One brand new and awesome survival level with dozens of traps (by Mario Marquardt). And 30 to 45 minutes long singleplay compilation level. It contains parts of Pehua, Oztoc, and Hueca and gives a good presentation of all the features found in our game. If you have played a recent version of the mod, there is likely not much new for you in this demo. If you haven't had the chance yet however to check out our game, or you don't own UT3, here is your chance really!

This also means that we are going to port over the entire project to the UDK, and go commercial (albeit in an indie way) with the game. The full release is set for somewhere in spring 2010.

The demo is free and does not require a copy of UT3 or the UDK! 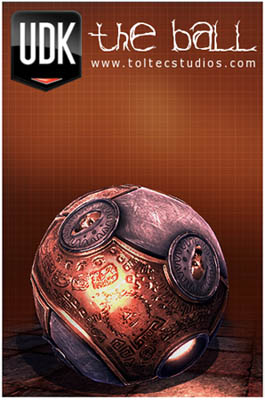 
We have a thread on our forum with some tips if you are having perfomance issues.

We added a FAQ to our website today as well. Check it out.

We are also bumping up our community efforts! Check out our newly formed Facebook fan page. We will now begin posting weekly updates and keep you people in the loop!

congratulations on being the featured demo

How come its going to take so long to port the remainder of the work?

Because we still have one level left to create, the very last level, plus, and even more important, we are not satisfied with the current state of the game yet. We want to improve it further. We want to make it cooler, more scary, bigger, and basically add and redo a whole number of things.

And the latter takes time, but the game will really benefit from it.

Seriously, congratulations. If your going "commercial" or selling the game at any point I would love to purchase it you deserve the money. Of course I'm sure Epic Fail would want to pocket some of your hard earned money.

Congratulations, but maybe a slight conflict of interest with the MSUC?

Great news! Should make it a lot more assessable.

will this ever be ported to the ps3?

The UDK does not support PS3 right now. And we will not port the mod version because that too is actually not supported by UT3. UT3 PS3 cannot handle total conversion mods for various technical reasons. Our game is too big and complex for it basically.

That aside, we would absolutely love to get this as a downloadable game on PS3 or Xbox360 in the future and we will really try to do so!

Congratulations Toltec! It's great to see a stand-alone form of the game being released. ^^

A downloadable version of the full game for Xbox Marketplace and PSN would be awesome. ;D

Congrats on your success.
I hope your given the chance to port to ps3 and or xbox 360.

Congrats and good luck on the next release :)
Definitely one of the best ut3 mods. Everyone should try this.

Downloading UDK right now, the trailers shows the updated version of Unreal Editor and tools, is that true? That would be awesome.

Does this mean the whole mod will become a game? Or just the last parts of it?(possibly sell?) anyway always wanted to try this but don't have UT3, now I can :D

The whole mod + additional content will become a game, and will be sold.

awesome, seems to be a problem with the demo version, at least for me, when starting up there's sound(startup video's) but ingame there's no sound at all, it makes me sad, I feel like I'm deaf lol... creepy

Haven't heard of that yet. Does that also happen to other UDK Games? Have you tried simply starting the game a second time? The first time it caches some shaders and all that, so it is different.

I haven't tried any other UDK games yet, started the game 3 times, each time there would be no sound, I think the first time there may not have been any sound on the intro, but not sure, second and third time there definitely was but ingame there were no sounds.

Try checking your sound and speaker setup if you are using Vista or Win7. I had the same problem when my speakers were set to 7.1 speakers. Changing it to stereo solved that.

Thanks that fixed the issue, strange it's always been on Surround when I don't have enough speakers for that... good job detecting that Windows :D

Anyway, played through the normal part and up to round 3 of survival, fun game :D

Oh god I hope The Haunted alos gets commercial release!

Only the really really really popular mods from makesomethingunreal.com seems to be able to do it, The haunted still needs a lot of work before it can be close to that.

the ball shuld totaly be made into a stand a lone game and of cause it should still be free :)

Great demo, i liked it pretty much.

Just played demo - its totally awesome! How hard is it to port the mod's content from UT3 to UDK version of the engine?

Provided it is stand alone, it is pretty easy. You can pretty much just open the content in the UDK and resave it. There are some small properties here and there that you need to change, and random things that don't port over well. Certain Kismet scripts mess up and such. But all in all it is relatively easy.

I loved it, though I'm sceptical to enemies in the game. Big boss monsters are ok, and the sand worm was just awesome, but the beetles felt a little out of place.
The undead were mostly fine, though.

Has a ton of potential. This could actually be a very successful game. A more engaging story would be amazing. Keep up the good work, though.