These mapsets are named after their creators. Does that make them better? Play all of them and make a judgement.

People tend to buy stuff going by its brand, and in case of some types of creative works, the most recognizable brand is the author's name. I'm sure you've seen books by famous authors where his or her name is actually printed bigger than the actual title. Perhaps this is why some Mac modders were keen to showcase their own names in their releases. Below we discuss eight such works (all mapsets, by the way), though one of them actually comprises six sub-scenarios. Overwhelming? Not as bad as it sounds, all in all I think there's still fewer maps than in the full 6-episode release. And let me tell you, I could have gone for more, but ended up rejecting some sets for more or less arbitrary reasons, or because they already came up here (Laz's 2nd Encounter comes to mind). I don't believe any of these Wolfers were particularly successful in establishing their namebrand, but at least now, decades later, they're getting a bit of duly deserved attention.

Might as well go with alphabetical order here. Brobst's CC and Brobst's Marathon are both 2-floor First Encounter mapsets by John Brobst. I only know his first name thanks to Clubey's readme attached to Marathon, but otherwise nothing is known about these sets. Marathon is probably the more interesting of the two, featuring Mac-style tight mapping with a number of bosses and some small tricks to keep you on your toes. Brobst's CC manages to be even more cramped and throws in a huge maze for good measure, all populated extremely densely by SS. 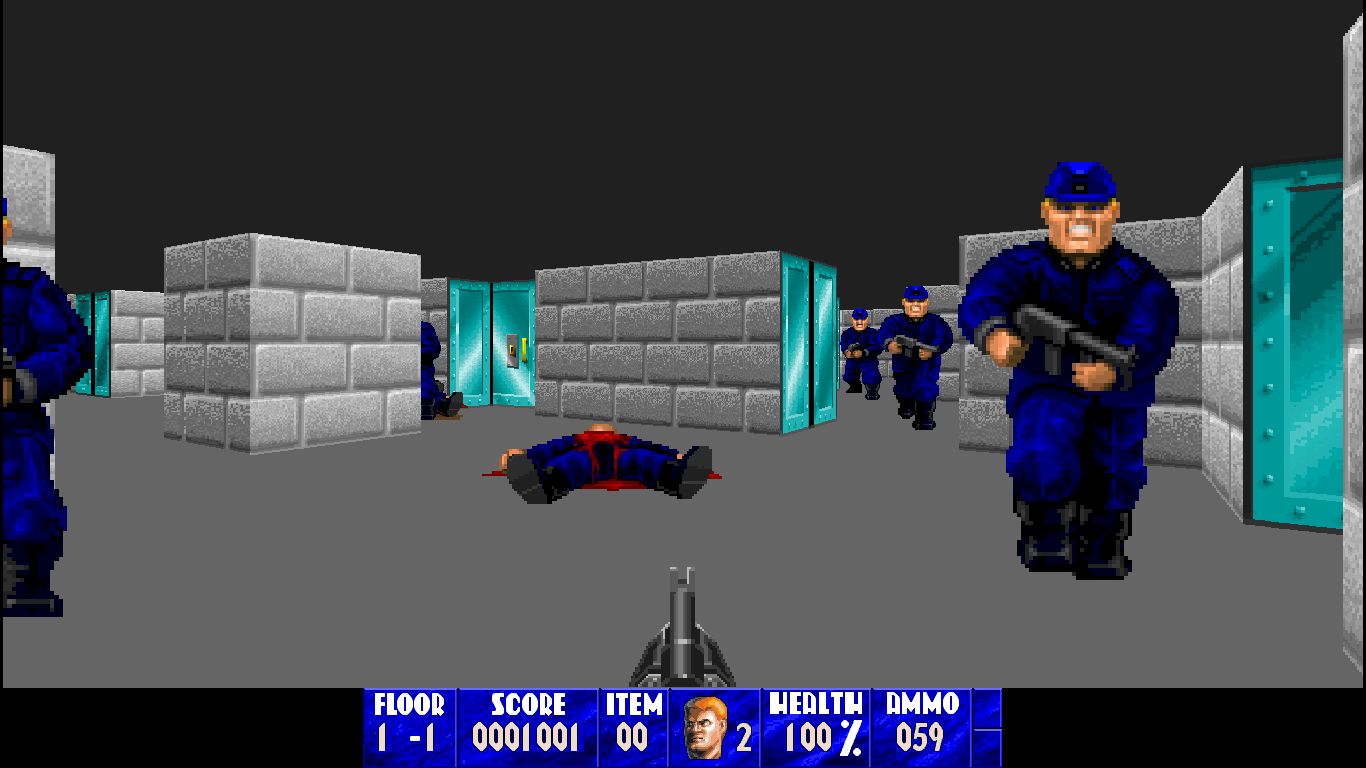 Kevin's Training. Six maps, Third Encounter. Don't ask me who Kevin is. The name indicates you're being deliberately put through difficult combat scenarios in some sort of deadly test, and in this regard, the mapset actually does not disappoint. Kevin keeps things fresh in terms of map design, but the mod's strongest point is enemy placement, designed to maintain variety and challenge you without overwhelming you with guard spam. Well, most of the time. Arguably there's still too many bosses on some maps, and if you've ever wanted to fight Hitler's many brothers alongside the man himself, you're in for a treat. But let's not spoil too much... play and see for yourself. 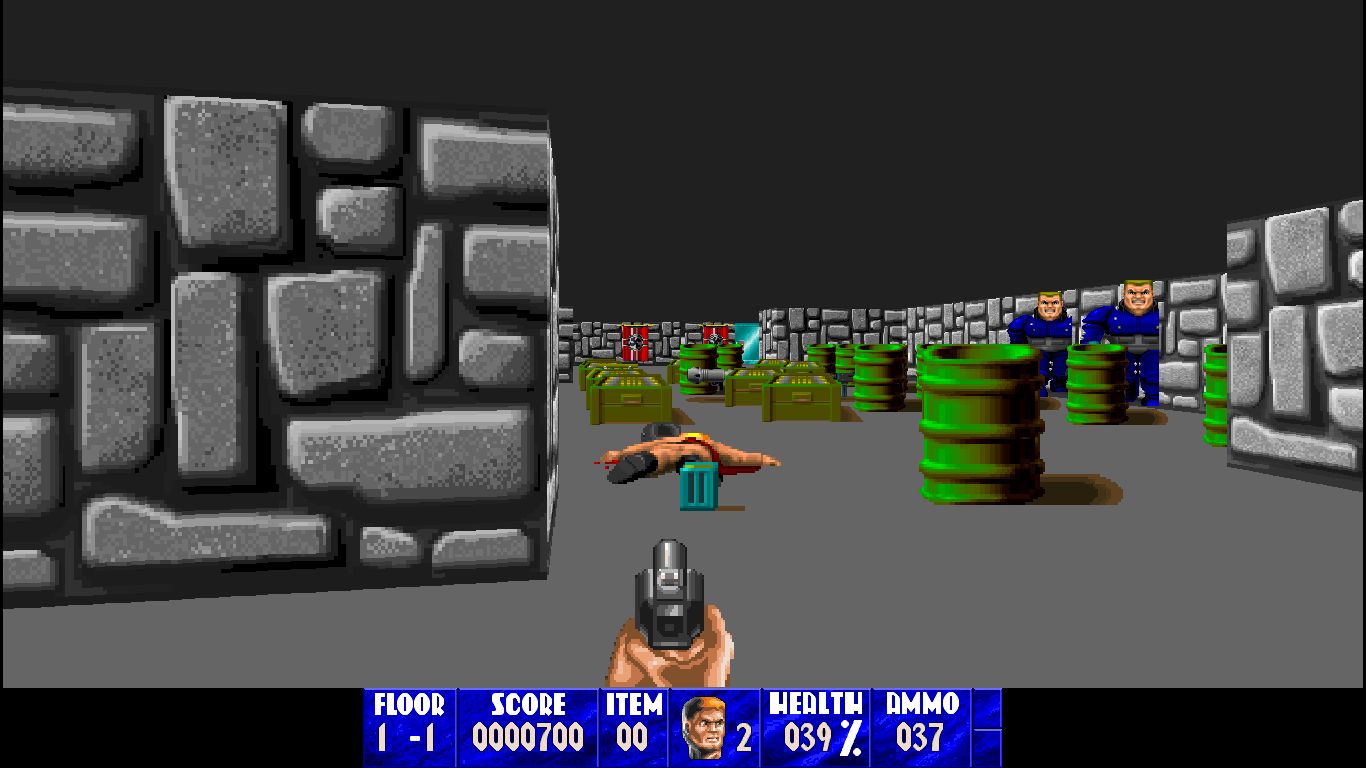 Seth's Levels For Wolf-3D (you don't say) give us three more maps for the First Encounter. I'm not sure what to say here, it's pretty standard First Encounter fare. I don't know if the last map is beatable on higher skill levels.

===CREDITS===
Seth, the god of storms and deserts. 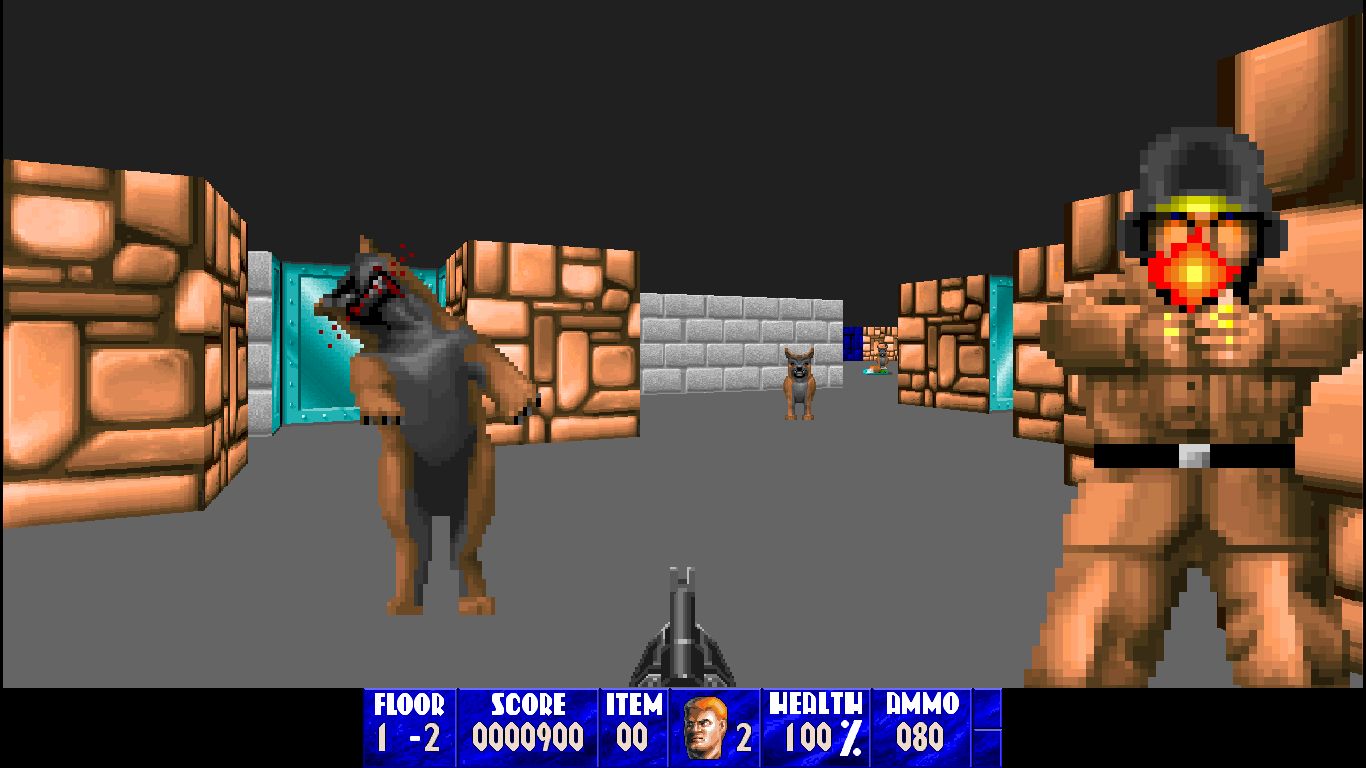 Scott's Revenge is a Third Encounter map that's left me speechless. I mean, maybe (like suggested to me by the esteemed Thomas) it was meant to be like some outrageous NUTS.WAD-type deal, but it goes so badly over Mac's enemy limits it's not even funny. Launch it and play with the 1994 Limits menu option on or off to see how it looked like on Mac vs how it looks like in full glory. 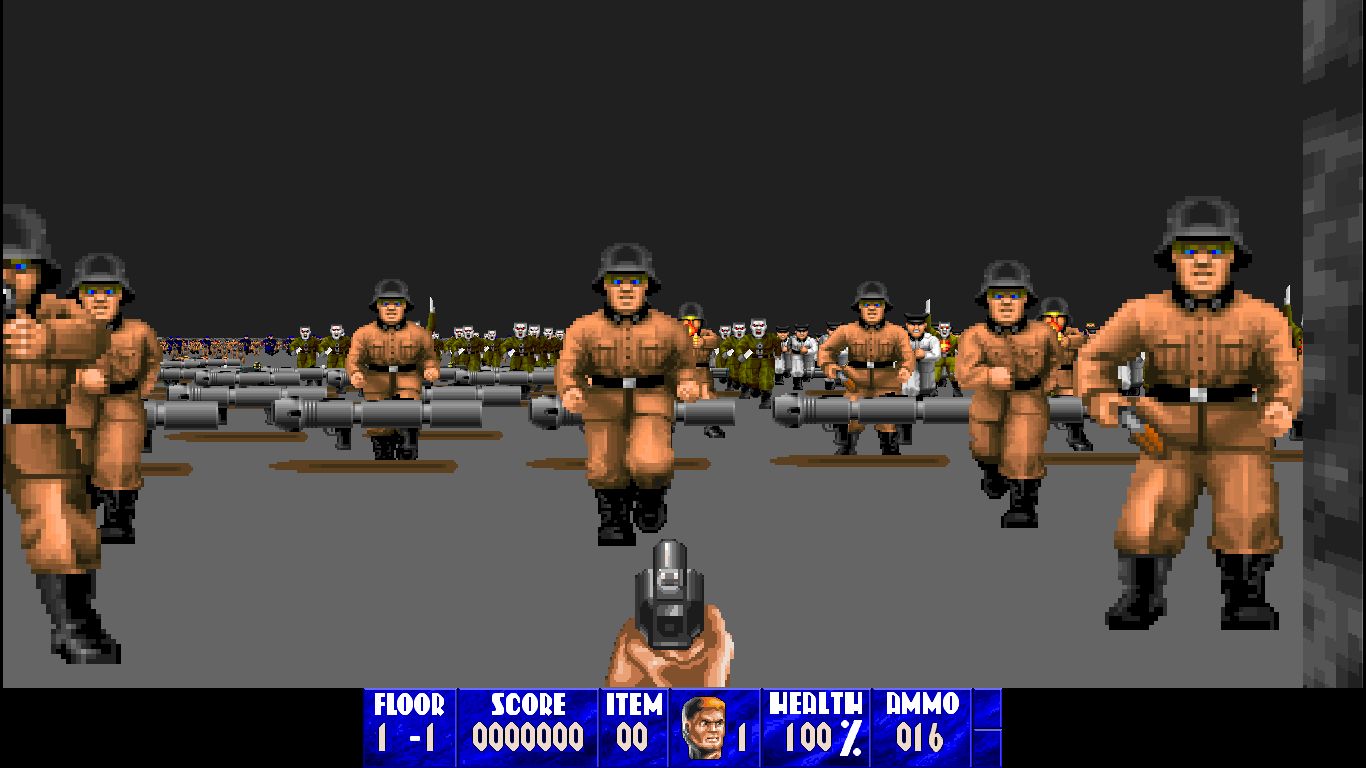 We now move on to Tim's Wolf Maps, which deserves a more extensive examination, not just because it's the most impressive release of today's post in terms of sheer numbers, but also because we finally get a chance to discuss something that used to be a part of the PC modding scene too: procedurally generated maps. First though, let's note that this mod is divided into six smaller scenarios, each of them a pure mapset but with its own, neat episode thumbnail. To briefly introduce them:

For a grand total of 38 maps, all for the Third Encounter. As far as I can tell, DeJaVu is the only one with any actual gimmick behind it (the notion of deja vu is well explored in PC modding, but it's employed here is a somewhat different way), everything else can be summed up as "kill everything". And I was going to write up brief summaries for each of these scenarios, or at least try, but then I noticed something... You see, the author mentions a program called WolfMaker 2.0 in one of his brief readmes. Now I know WolfMaker is the Mac answer to Creator - it generates maps based on underlying algorithms and a few adjustable parameters - but I was never able to use it correctly. HOWEVER, a query in various mod docs turned up one mod also made with WolfMaker: Etude 2 by Clubey. Although Clubey says he modified the generated maps afterwards, a comparison clearly shows many similarities between Etude 2 and some of Tim's sets.

What can I deduce about WolfMaker on this basis? First of all, the program fills out the entire map with brown brick tiles. It then begins filling it out with rooms, the number of which you provide before the map is generated, starting in the upper right corner where the player almost always starts. There seem to be three kinds of room shapes: rectangular, hallway with a single turn, or a three-way hall (think of a cross without one arm), but they try to make up the simplicity of shapes with variety of wall textures (a large map will be very colorful indeed). Enemies are positioned more or less randomly around these areas and for some reason First Encounter enemies appear to be far more common than officers or mutants. Treasure and resources are likewise strewn around rather haphazardly. There's more rhyme and reason to decorative object placement, achieved by the simple idea of putting items in 1-2 corners of a given room. It can be more or less anything - flag, armor, well, you name it. Ceiling lights and chandeliers are also placed in logical, aesthetically pleasing locations. The same can't be said for wall decorations, often asymmetrical, out of place or even placed as to be completely invisible. Some areas have steel walls as decoration, which I guess makes a small degree of sense, but visually it's a total mismatch. I guess I can also mention secret rooms and pushwalls, which are actually set properly and work fine. But despite some bright points, a WolfMaker map is always going to be just a bunch of simple rooms with random guards, stitched together into something vaguely playable, with no true creative thought behind it. Truth is both WolfMaker and Creator suck, but in different ways, and unless you can work miracles, using generated maps as a base for your stuff just isn't that great of an idea.

But don't get me wrong, not everything in here is WolfMaker spam and you'll find some original, creative designs in the short romps of Ice Man, the gimmicky DeJaVu and the overarching symmetry of Murder Morgue maps. This is well worth a try, both for these sets and to gain some insight into the workings of the map generator. 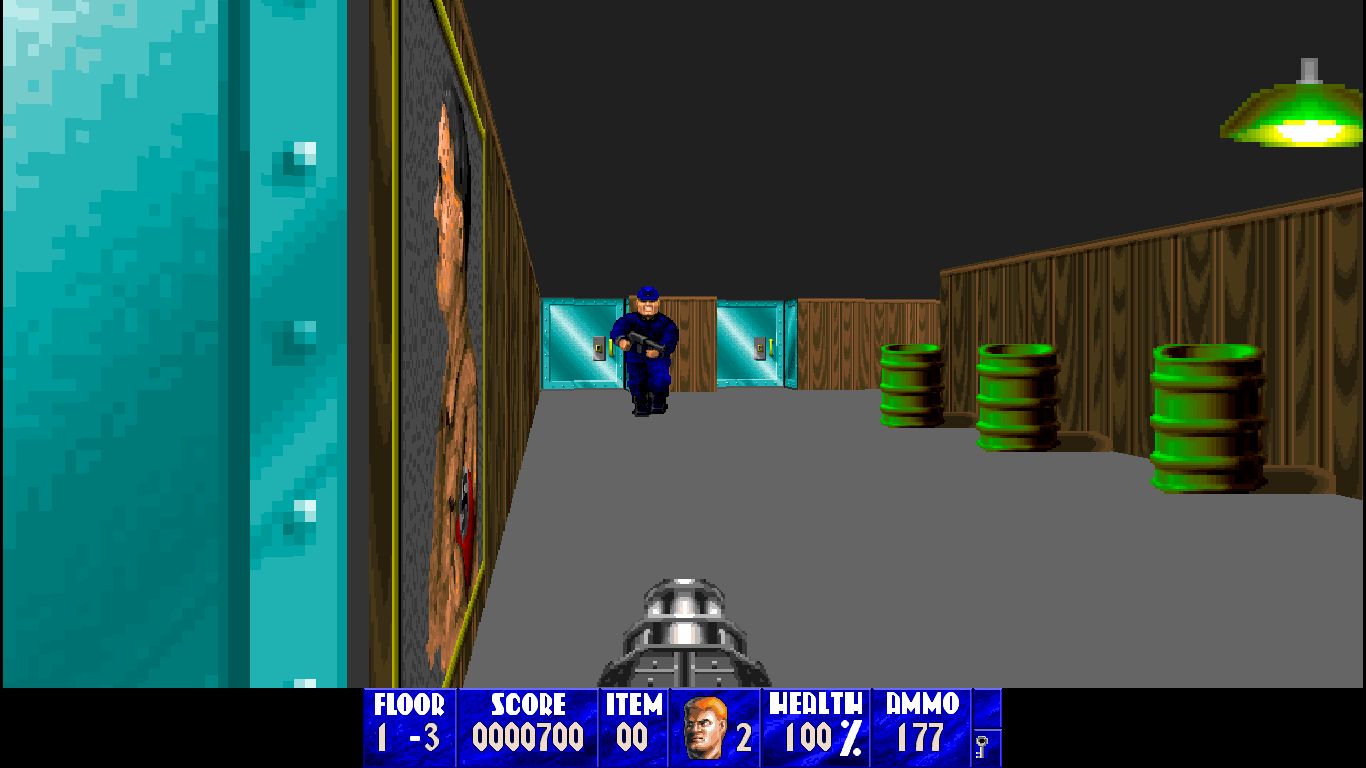 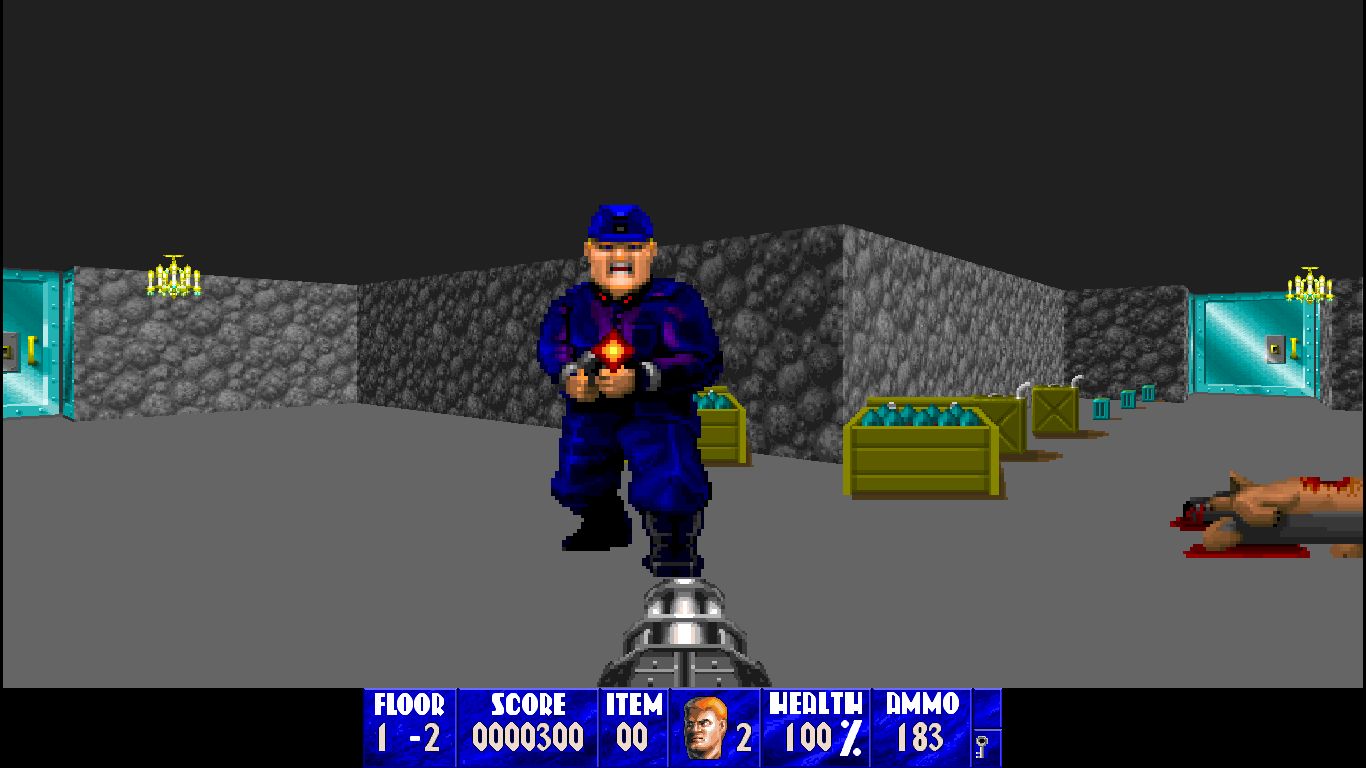 OK, I'm afraid anything coming after that is doomed to be a bit of an anticlimax, so apologies Tom, but Tom's Wolf Map (alternatively called Tom's Big Map) is next. Actually three maps for the Third (I hope) Encounter, the last of which is Tom's very first Wolfenstein map. Tom mentions some possible bugs in the readme, but I don't think any of those will be happening on MacenWolf (it's just that good (not really)). Map designs are OK aside from the final floor, it's not a momentous release by any means, but if you're reading this, you're probably going to try it anyway. 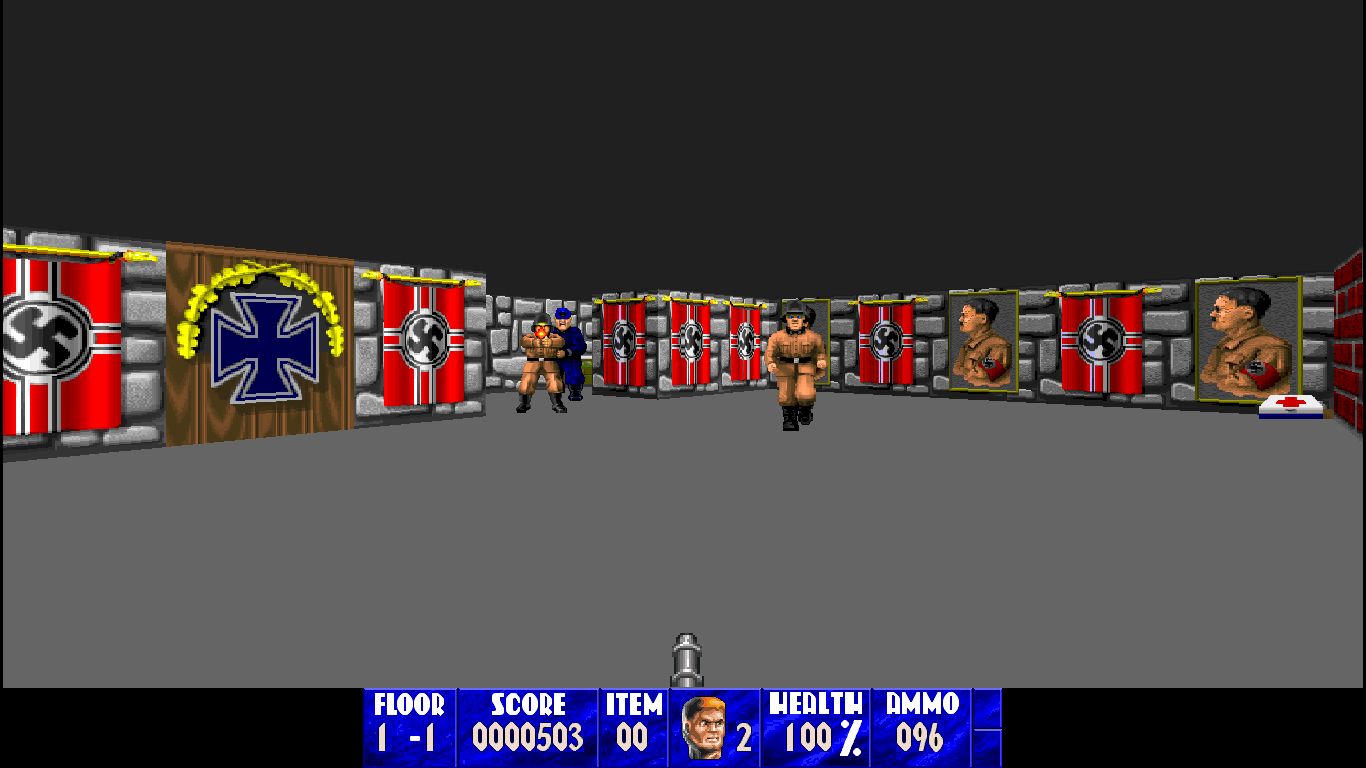 And so we wrap things up with Vik's Fun House, a single First Encounter map. I can't say much about it because it's mostly mazes and a few cramped areas. The boss map might give you a bit of a challenge, but only if you don't know how to strafe. 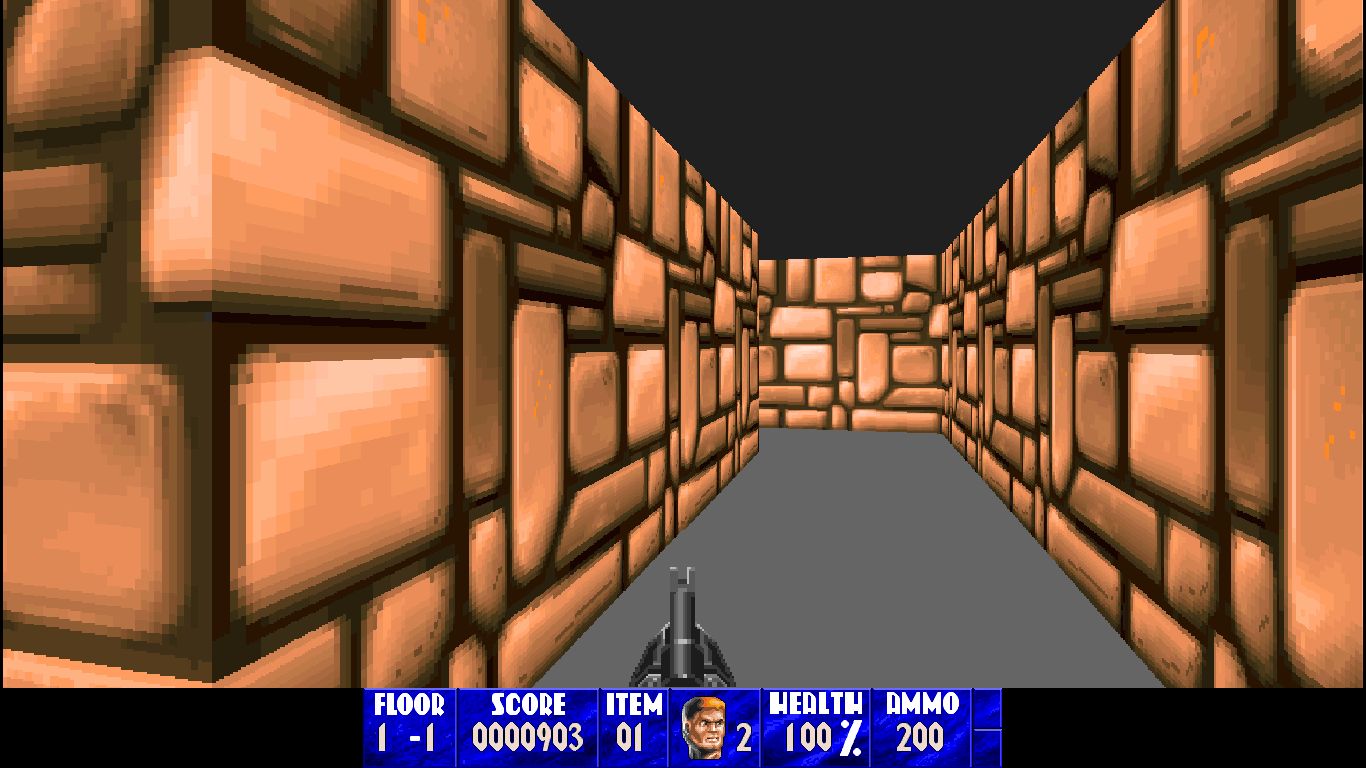