This time there's hundreds of them! All ready to rip you apart.

The project changed to use a modified Chocolate-Doom engine a while ago. More possibility for lots of action without framerate going too low. The game palette gets actually used in everything. Using C instead of QuakeC to do the gameplay allows more control how it plays, but I'm not exactly an engine programmer, so some difficult to do features might not be there.

Player got a night vision mode, which turns everything green and boosts the lightlevel. It uses some energy. Running use the same energy too. The movement speeds can go through some changes. The default move speed is supposed to be run, and the faster speed is meant to be powerup type running. There's air control and player can jump pretty high.

Player has 4 of the previous weapons improved/redesigned. Other weapons going to get the same treatment. I've made the weapons possible to reload in the models. Reload feature is not yet in game. It may be an option or part of a higher difficulty level. Player takes no damage from his own weapons, but it could be another difficulty level setting.

The difficulty level settings may be customizable, so you could play some serious realistic game with fewer difficult monsters or some brainless fun with tons of easy monsters, or some ultra hardcore mode with every setting turned to the max + 1. 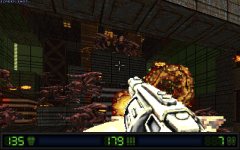 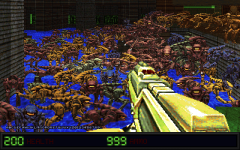 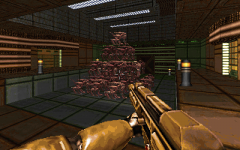 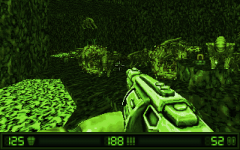 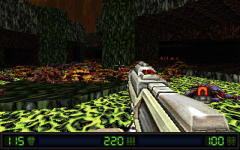 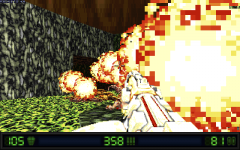 The things can be over/under each other without any problems. Including making some crazy pyramids out of them. There is probably no limit how many can be piled.

Weapon damage can now do Z thrust. So, you can teach them the superman!

The game also runs at 40 tics per second. 35 ticrate of Doom has always felt a little strange.

Looks intense jimi, keep at it!