Our 3D modelling sub-application is now almost complete. The modeler will allow you to create your own voxel sprites and import them into your regular gameplay.

One of the primary focuses of Aetherius, is content creation. Before we started development, we decided that *all* of the vanilla content that we ship with the game will be made with the same tools available to the average player. All the vanilla content will also be optional when starting a new world/character; allowing you to effectively create your own sub-game within Aetherius. To do this, we had to make a 3D modelling application of our own, tailor made for voxel sprites. 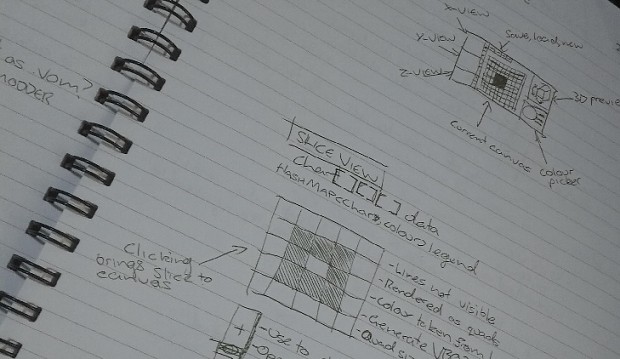 The modeler will allow you to make voxel sprites of any relative size. The default will be 16x16x16 voxels, but you will be able to select the size of your model when you click "New". Currently it only has the most basic features that it needs; save, load, new, paint, fill, erase. The very next step is creating a colour picker, then further down the road we'll add a utility for connecting different models together. A hand to an arm, an arm to a torso, etc. 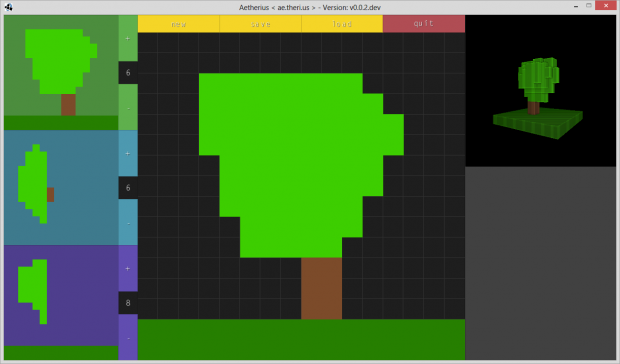 To keep things clean and tidy, the save and load features do not deal with file dialogues. Advanced users will be able to grab the files from their explorer application of choice, but your average player will be dealing with our tidy gallery. Nice and neatly organised by category, functionality, and tags. Everything you make will be available in the gallery; your gallery will be presented with checkboxes next to each item for enabling or disabling them when you start a new world. Loading will likewise present you with the gallery, to choose what you want to load. You will be able to load any of our vanilla models and edit them, but the game will not allow you to overwrite them, instead a save-as feature will be implemented. To use a modified vanilla model, you would simply uncheck our vanilla version, and check your modified version on world load.

Eventually the modeler will also allow you to add custom animations as well, but to begin with, you will have some basic options with time periods attached to them;

The modeler is going to be a large part of the initial release. Being able to create and import your own content is a very important feature of Aetherius. Eventually, we will provide a platform for sharing your creations, and a series of actions you can take towards getting your content included in the vanilla distribution.