A short summary Upside-Down Dimensions conclusions on the kickstarter campaign, as well as next steps action plan. 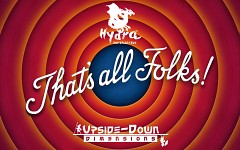 We have finished our campaign without the glory and the results that we expected 35 days ago but we have to say that it has been a fantastic ride, full of great people that has shown us their love for the game and for the care, work and sacrifice that we have put into it.

So thank very much for all our backers that along the last month have given us a strong reason to keep the campaign alive although the progress was not very bright and successful.What now?We have been looking at the reasons why the game has been successful, and we think that basically we were unable to make the world aware of the game, and we somewhat failed to communicate correctly about the game, its core mechanics, the strength of its story-line, the care and detail put in each detail of paper included in props or characters, and many other details that have given you a reason to trust in us during this campaign.

We also failed to make regular updates on to keep everyone of our backers aware of what we were doing and make you feel as part of the team, and you are being listen to.We also confused people with the platforms the game would be coming too, and a lot people interested in the game, were unable to know it.

But ... This is not an "ADIOS" we would say in Spanish, or a Goodbye, but rather a See you later. We are going to do our homework correctly regarding make the entire game aware of our game, and then we are coming back in a couple of weeks with all the improvements done to all the details that we think we did wrong.Keep tuned to the updates as have already learned, and we will be using them correctly to show that our shared dream is not dead but rather pretty much alive.

We invite also you to share with us on the comments, your thoughts on what we could have improved on our campaign, as to start immediately working on our come back.Keep sharing the game with friends and social networks as to make the audience of the game grow and make our come back much more definitive.

For this we have created a newsletter to share also information with all people that will not be able to back us until we are again alive on Kickstarter, you can found it at Hydra-interactive.com thank you very to all of you, it has been a pleasure to receive your warmth.See you soon on this same channel soon. Share your like to this update and share your thoughts on the comments.

All the Hydra Interactive Entertainment team.