Even the US troops in Iraq are pissed off by Infinity Ward, because of the lacking LAN functionality. One of them, nicknamed Outcast1Bravo, wrote the following post at the official IW forums:

Thanks so much for this rotting piece of garbage that is this MP experience, IW. I can’t believe you devs are so completely lazy and money hungry that you would totally screw the PC community that made your series so popular. What is even worse, is that I, and everyone else for that matter, cannot even enjoy a LAN game, which is a must when deployed given our horrid internet connectivity over here. That alone is a game killer for me. After a long day of patrolling, getting shot at with small arms fire, RPGs, being IED’, and RKG-3′d to death, literally… we can’t blow off a little steam and relax with some CoD. Thanks gents, thanks a lot.

We took a little time during our patrol at a IP station to say thanks. 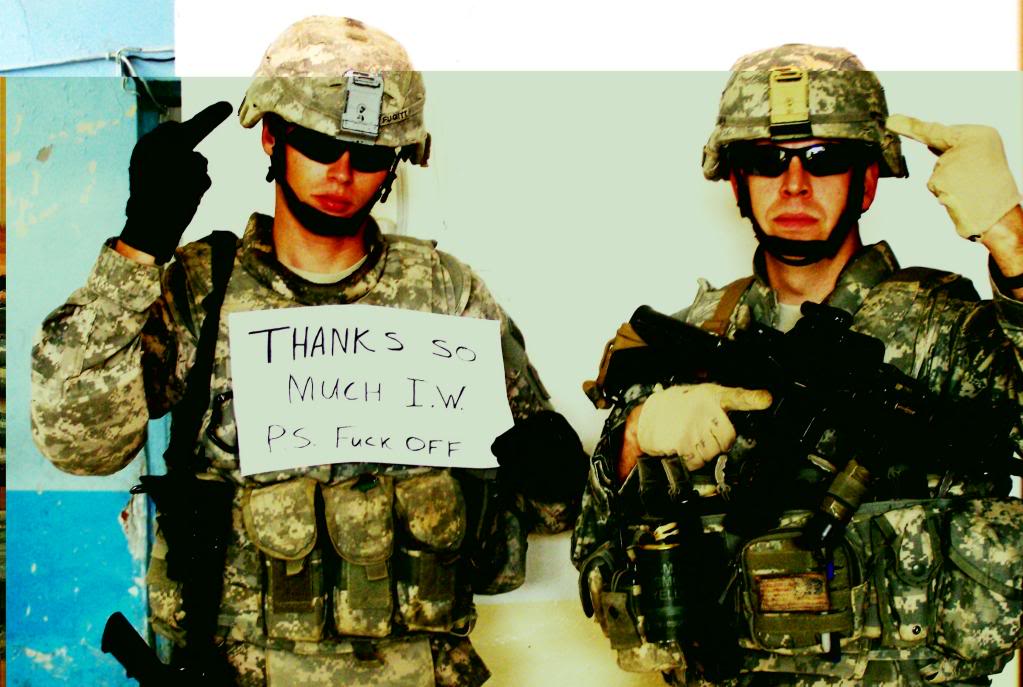 For those of you out there yelling that the above picture is fake, which I can imagine for a bit since their is something wrong with the top of the picture, I asked for more proof in his topic, for instance if he could make another picture, holding up a sign with ModernWarfail2.com handwritten (or something similar), so that we all knew for sure that this isn’t a fake, and here is what I found in my email today:

If you recall my post in the IW forums titled Thanks from Iraq, I posted a picture of myself and another soldier holding up a sign we made.
I’d post this new picture via that post, however, my account has since been suspended. Thanks IW.
Here is a new one I made with 5.56 ammo I delinked.
Ganted, the 2 in Modern Warfail isn’t there, simply forgot about it when I took the photo, but I think it works.

How awesome is that ?! That’s the best proof you could ever get !

Special thanks to Outcast1Bravo and his squad for taking the time to make these awesome pictures !

Too true, Mr. Kotick's only thoughts are about making more money with crap.

you do have a point Cr3mat0r also WHY THE HELL DO I SEE YOU EVERY WERE I GO!!!!