As for any test from now on, two things to be mentioned (as determined from logs):

The first item, when compared to our target shows smaller differences than the test performed a couple of weeks. The smartgunner is still to strong, and she will be adjusted accordingly.

The second item points out that the new netcode we're experimenting with in our mod runs good. From earlier tests, we've noticed that anything above 70% hits being validated by the server will give the player the sensation that all his the hits he saw actually landed on the target.

Another thing to be noted, although not presented by the log: the flame thrower is a bit too powerfull against aliens. Almost an intant kill weapon. That has to be addressed, especially since the test two weeks ago showed that intant kills lead to frustration.

And speaking ow which, nerfing all the weapons by 40%? That seems to work out well, since combat took a bit longer.

To conclude, I'd like to put a particular (and failry new) map in the spotlight: 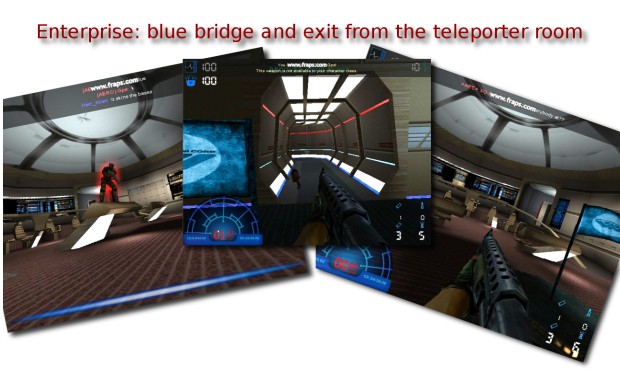 This is the "Enterprise" map. Developed by our team member Gps, this particular map shines when it comes to smaller (2-3 players) teams. You can expect a lot of close quarters fights taking place on it, so keep your shotgun close.

Enterprise? Cmon, no Alien or Predator-Fan wants to see an Enterprise-Map. Star Trek is the stupid family-compatible alternative for Alien, much worser than Star Wars!

Pretty good mod though, nice work. Good to see that AVP2 is not dieing...

Well, belive it or not, the map was made by an Alien fan. As for the series being family-compatible, that's ok. We're just interested in the level, and from what we played on it, it provides a very nice experience for teams of 2 - 3 payers.

now if you had only mapped the entire ncc1701d that'd be something. It was only attempted once before (with interactive turbolift, toggleable forcefields, working transporter, warp core breachable, all within 1997)

Regarding turbolifts, those are a no-no. All doors in AvP2 are no-no, since their position is actualised by the server. That also means colision detections for players that, unlike SP, have a latency different of 0.

How did that attempt end up?

agreed about the enterprise thing being out of place :/

Haha "Herr Alien" xD Are you from Sweden?

Love to see the AVP2 still in life. I'm a bit worried do, about the 3th game that is being develop now. It looks rather.. bad. Hope I'm wrong.

Erm, no, I'm Romanian. So, AvP3 didn't give you a good impression? TO be honest, it didn't impress me that much either. But I am biased (I like AvP2 a lot), so until I see their single player in action I don't want to lash out against it.

Same here. I didn't like the Predator jumping "mini game" they have made. Looks to much forced and not free as it should be.
Oh about why I thought you were from Sweden. Your nick name "Herr_Alien", in Swedish "Herr" means Mr. So it is Mr Alien. :D

I understand why the confusion :)
The nickname is a mix triggered/influenced by the two games that I was playing: AvP2 (as the alien drone) and MOHAA (as a german officer, in MP).