This news post documents and discusses the milestones in development progress of TerraForge, an MMORPG TCG being developed by DLK Studios. It took just shy of a year to get where we are today. Of course, this is only referring to the digital development of the game, considerable brainstorming, planning, and physical prototyping was done prior to this.

So today we thought we'd basically summarize the our progress over the past year on our favorite TCG MMORPG Project over the past year (Not biased or anything like that...). We're of course referring to our own project, TerraForge. The game boils down to being a turn-based TCG with MMORPG elements. Players use an Avatar (or Hero) in addition to the cards in their decks in order to overcome the game's challenges and defeat other players. Avatars can be leveled up and new abilities may be unlocked via a skill tree system. There's a lot more to it than that really... but we could likely write several posts about the leveling, skill, and resource management systems for the Avatars and still only scratch the surface, so we'll leave that for another day.

When we first decided to make TerraForge, we thought we were in way over our heads. Embarking on such an ambitious project has required many revisions to be made along the way in order to finally realize a vision that we were happy with. This was very demoralizing at times. To be honest... when we look at our very first version of the game (visually speaking), I'm not even sure what gave us the motivation to get through it and not just scrap the entire thing. Anyways, we're going to showcase four screenshots taken throughout the days to basically document our journey over the past year. Perhaps this may serve as inspiration to other developers out there.

TerraForge Version 0
This is basically what the very first version of TerraForge looked like. At this point we had no idea what we were doing... we were trying to develop the game in XNA, while using 3D models put together in Blender (our 3D model man at the time had only about 0.5 months experience with Blender). We also had no idea what the limitations of XNA were. For those of you that don't know... it's not the best suited platform for developing a sophisticated 3D world... a lot of the rendering has to be built from the ground up. Anyways... below is a picture of this "version" of TerraForge. 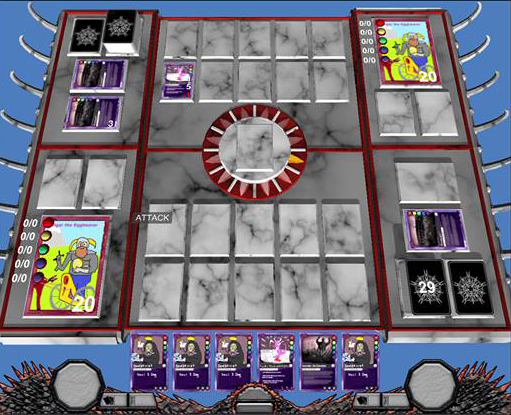 It was pretty evident at this stage that we were just tossing things around, right from ugly text to the makeshift MS paint card art.

TerraForge Version 1
At this point we discovered the wonders of the Unity Engine; which was Unity 4.something at the time (our 3D model man also got some hard earned experience throughout the time). Needless to say improvements were pretty drastic. This is also about the time we decided to quit our day jobs as civil engineers (designing civilization's basic infrastructural needs and all that) to pursue this passion project. 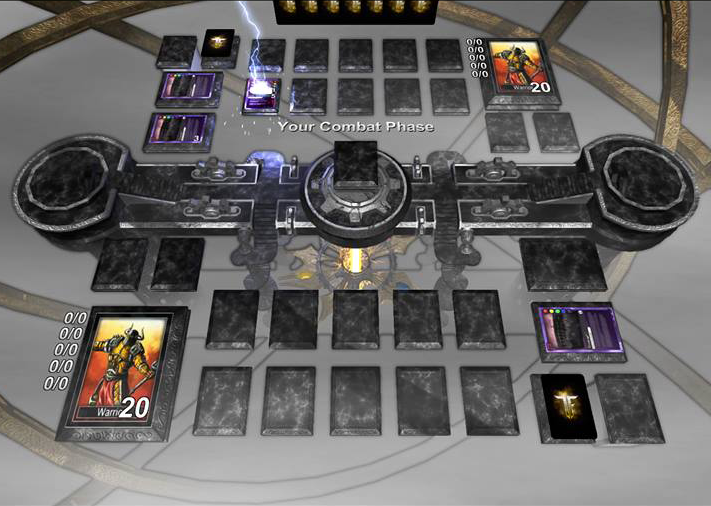 At this point we were really liked where the game was going... it was on its way to looking pretty slick and we thought we had a visual aesthetic we were proud of. We were finally using neat things like dynamic lightning, normal maps, speculars, etc...

TerraForge Version 2
So in "Version 2" of TerraForge, many aesthetic changes were made, we decided to go for a new color scheme setup, decided to redo some of the GUI systems we had going on, and just did some overall polishing in general. The biggest and most notable change was inspired by casual joking discussions we had around the office. We would continuously joke about making 3D models to represent the players Avatar and have them doing the craziest and most cool animations. It was all a big joke at the time, but we finally decided to do it. We thought this would add some extra life to our TCG, and it was something (as far as we know) that nobody had done before. This is where the Mage Avatar 3D model came in. 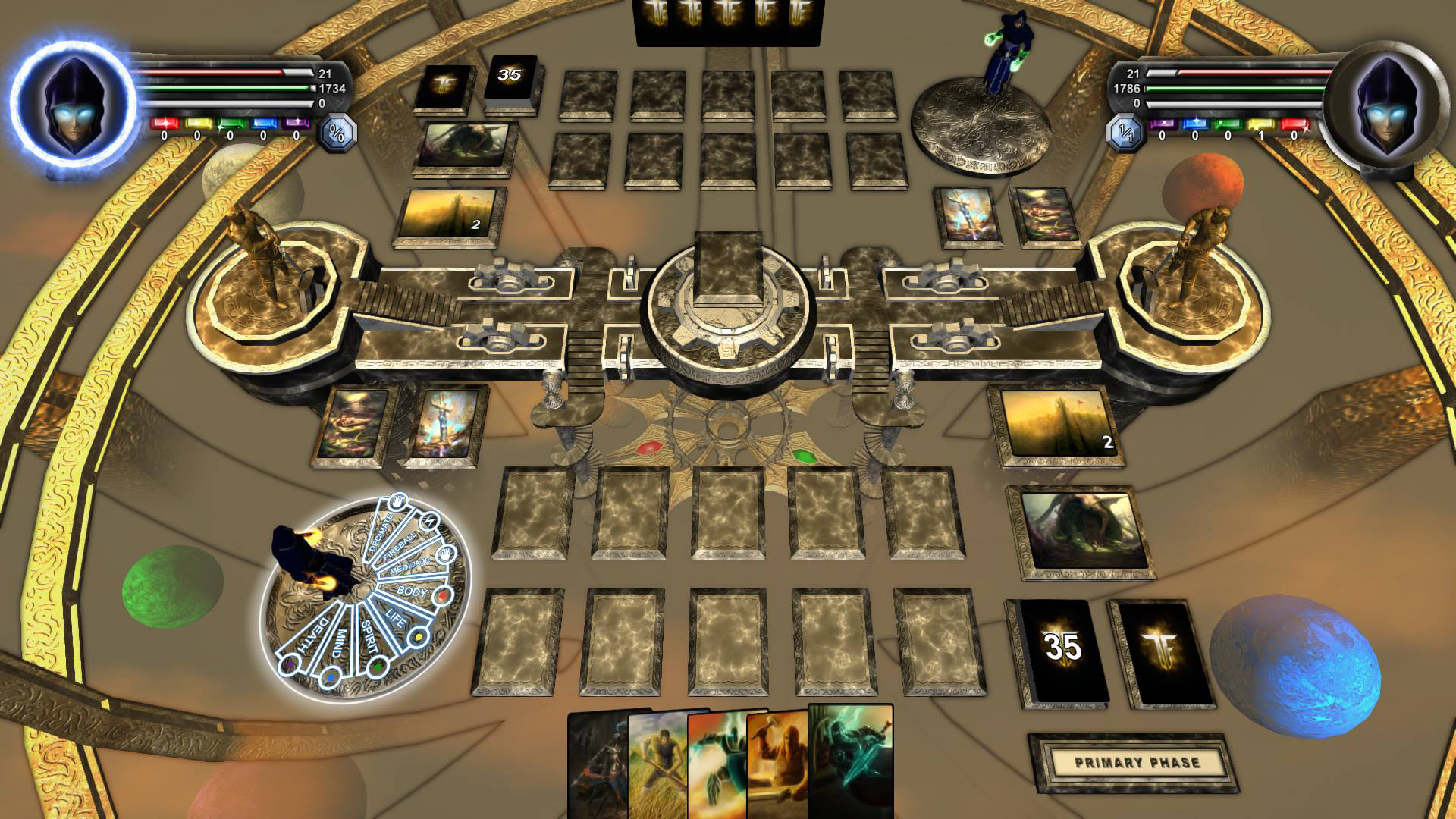 At this point we were so proud of what we had accomplished. We had a visual thing going on that we were very proud of, the 3D models came out looking pretty sweet! (although by today's standards we would say they're not very good), and things were looking up... the sky was the limit... sort of... we quickly found out that our game was having a very hard time running on even the most powerful machines we have in the office, which isn't anything super fancy... but the game is a TCG, not the next Crysis... so no excuses...

TerraForge Version 3
To be honest, there really should be a "Version 2.5" somewhere in here to discuss all the little things we changed between "Version 2" and "Version 3", but rather than bore you with the details, we'll just summarize the little things very broadly. Lights were removed, lightmaps were baked, giant models with tens of thousands of verticies were replaced, and IBL (Image Based Lighting) shaders were introduced. In addition to all these little changes, we removed a lot of the normal map textures we were using and replaced them with simple diffuse textures. We introduced a skybox to the game, and we really beefed up our 3D Avatar models (both from a texturing and animation standpoint). The final result from this was an aesthetic that I honestly cannot say is better or worse than the previous version. I really like them both for different reasons; however, this version runs A LOT smoother on the machines we have in the office (we tested on some pretty outdated computers), and makes better use of screen space, all in all more information is available to the players. 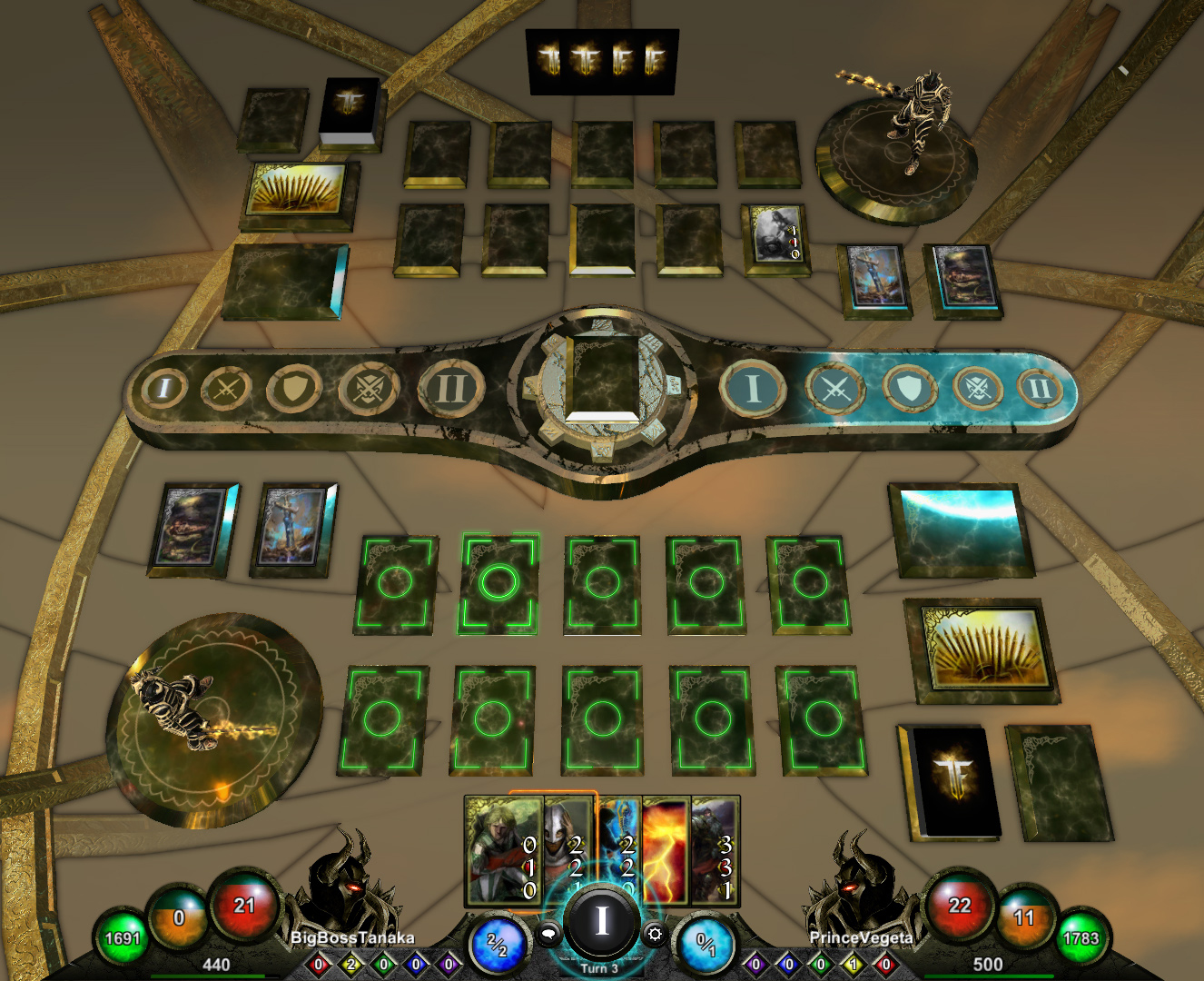 So that pretty much wraps up this little stroll through time. We hope you found the the article interesting and took something from it.

I guess the lesson you should take from this at the end of the day is that video game development is a lot of work... it's a lot of second-guessing yourself... and it's a lot of persevering through the most grim of situations... just remember you're not doing this because you need to get it done, you're doing it because you want to get it done (hopefully). Anyways, thanks for reading guys!