Tons of fixes! Updated credits! No freezing game in front of Club Bikini!

Here it is friends, spooks, Illuminati apparati, extrajudicially assailed pariahs, starving unemployed hacktivists, and everyone in between. 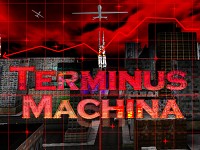 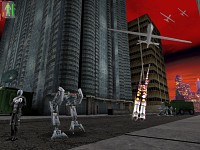 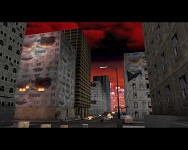 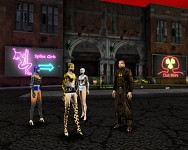 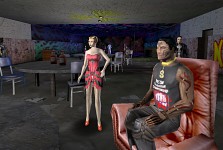 Terminus Machina takes place in its own completely original world, which might be best described as "In-progress-apocalyptic" as opposed to post-apocalyptic, and hones an updated cyberpunk lens over the difficult issues of our troubled times. TM attempts more radical gameplay alterations, in contrast with longer, 'canon' mods such as Deus Ex: Nihilum. New features include:

* Electronic face masking for thwarting surveillance/drones which cover almost every inch of city.
* Facial biometrics capture: steal identities to use for social engineering. Order gang members around by impersonating the kingpin.
* Wireless internet & Darknets: jack into enemy networks through WiFi, thus you need stealth not only in meatspace but in cyberspace
* Offensive AI: enemies don't just patrol around waiting for you to tase their butt. Robosoldier extermination squads and missile-launching drones will actively hunt you down. Be paranoid. Be very paranoid.
* More involved hacking: cryptography, DDoS, spoofing.
* Unleash Malware on the internet to infect machines or even create your own botnet army.
* Hunger: experience real economic destitution as you slowly die of starvation and are forced to beg, steal, or even kill for a piece of bread.
* DIY & Crafting: Upgrade your hemp trenchcoat with solar trim, syphon electricity from the private power grid.
* Mechanical hacking: Take apart old phones and radios to hack together an EMP gun, reverse engineer a captured police-state drone into your own personal bodyguard.
* Nature Punk: Knowledge of the GMO and artificial-plague ridden flora and fauna can mean the difference between life and death. 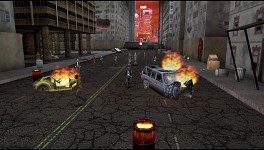 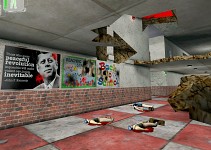 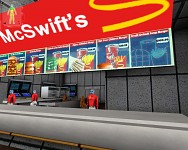 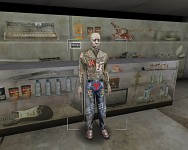 Terminus Machina, in it's current form, is approximately 2-4 hours in play time. However it was specifically designed for maximum replayability, and selection of different skill sets should radically alter gameplay. The nature of the crafting system means some items may not be accessible without certain skills, and the new "social engineering" skill will make the game much more diplomatically involved if it is selected. "Naturepunk" will alter the playing field as you gain the ability to use plants and animals not only for healing purposes but even weapons.

I am currently working on a patch to address the most deal-breaking issues with Terminus Machina at the moment. Whatever state the mod is presently in, I wanted to get it out this weekend, as RL work will be rapidly picking up this week, severely constraining my free time, and I did't want Terminus Machina to go full-Duke Nuke'em and turn into vaporware. My core talents are as a programmer and a writer, but I've done almost all of the work on this game from level design to coding to 3d and 2d assets to the writing, sound, music and really don't have the time to continue iron-manning it. So, bear with me, and, if anyone is interested in helping out in any of those areas, let me know!

Check out the The Terminus Machina Story Collection to dig deeper into the muck-filled rabbit hole of Terminus Machina. Fourteen original short stories set in the TM world!

Congrats on the release! :)

The mod looks amazing and I'll definately try it.

Well done man! Glad I could make a small contribution to it.

Thank you! Your contribution was most helpful!

Thanks for the release and your efforts! Next on my list once I finish Nihilum. Can't wait to hear my own and others voice acting and laugh my *** off :D

Thanks! And btw, I'll pm you, as I think I need to double check the credits and make sure everyone is accounted for.

Music? wow, that was a obvious omission (although I can see how it can be ommitted, and how futile it would be to hold of a release until a composer agrees to help).

Well, I'm mostly using my existing work for the music and I think some additional original material could take the mod up another notch.

This mod is amazing at the start, but as soon as I approach or try to talk to the Big Guy in front of the Splice Girls, the game freezes. I've tried adding -safemode to the shortcut and choosing the software renderer (I usually use the DX10 driver), I've tried starting a new game, and I've tried both with and without the 6/8 DialogFix.

Unfortunately, since it's a freeze and not a crash, the log file gets truncated before any relevant logs are written. I'm using a clean install of the Steam version, with only the DX10 driver and TM added.

Any ideas what is happening and whether there's a workaround?

Hm, like right after you try to talk to the guy? I'll have a look at that, I think one other person mentioned that. It might have something to do with the audio.

(As a way around this to continue the game for now, you can lockpick your way into Club Bikini / Kennedy High through the small door on the left side near the blown-up building.

Not after talking to the guy, but exactly when dialogue should be starting. It freezes with the HUD intact.

Thanks for the workaround. Now I can get back to playing :D

Ok I figured out why the game is freezing during the bouncer convo. It will be fixed in the next patch, coming soon!