Some news concerning especially the team and the story.


Some news concerning especially the team and the story. Here's a description of the events which lead to the starting situation of Raindrop:

Unknown wrote: Early 1920s: Russian scientists want to investigate whether a community of humans, with the necessary ressources, can supply itself and exists on its own. The gained results shall be used to develop emergency plans for a possible Second World War. This study is part of a series of tests which also includes the creation of super soldiers and paramilitary warfare. Everything happens in the utmost secrecy. The Thule Society in Germany carries out similar research.

1926-1929: Single field tests are started, but they all fail. The test objects lapse into primitive behaviour. Further practical experiments are discontinued.

1931: A group of scientists under the guidance of Alexej Zabrenko, who has been nominated for the Nobel Prize, have determined the cause of the failures. Many more people have to live in a bigger area and have to be provided with free time, varied activities and an educational system to succesfully realize the project. The Kremlin declines funding the project due to the cost.

1933: The situation becomes more urgent. Hitler is in power in Germany and the danger of a new war is more present than ever before. Permission to build the complex is now granted. Only Zabrenko's Team as well as an employee of the Kremlin, Mischa Semenov, and his representative know about the operation. Not even Stalin has notice of it. The forced laborers which built the complex are sent back into the Gulag, where their knowledge is worthless.

1936: The complex is finished. From all parts of Russia people who aren't missed by anyone are brought to the complex. Zabrenko himself takes part in the study to control it if necessary - and to collect data. He is the general practitioner of the complex. After some teething troubles, the people have adapted to the conditions. Zabrenko is the only one who keeps in touch with the outside world. His team of scientists analyzes the data. They don't know where the complex is located. The area around the complex is mined to prevent an escape.

1938: After two years the people have indeed grown together to a social unit, but the benefits of the research are minor. Hitler meanwhile deploys German troops of the Wehrmacht in Austria as a first step for the Anschluss to the German Reich. In Russia the money for the research is to be used for the arms build-up, but the employee of the Kremlin doesn't want to give up the project yet.

1. September 1939: Events get out of control. Nazi Germany invades Poland. All the money which has been given to the secret projects so far is now put in the arms industry. All project overseers are summoned to the Kremlin. On the way to the Moscow Kremlin, a truck crashes into the car of Mischa Semenov. He and his driver are instantly killed. His representative who should in this case assume his duties, was denounced one week ago by opponents in the party for collaborating with the Germans, he was sent into a Siberian forced labor camp immediately. The last will of Semenov is carried out, henceforth the Finance Minister is instructed to stop the payments for the research team of Zabrenko and the plans of action are sent to General Jegor Kosloff, who will evacuate the complex.

18. September 1939: The letter reaches the military outpost of Kosloff but General Kosloff had died the previous day during the invasion of Poland, shot by a Polish sniper. The successor of Kosloff stows the letter away unopened.

8. September 1997, somewhere in Russia. 58 years have passed since living breath was felt in this place. You wake up in an abadoned tunnel, without even a name ...


Three more screenshots, one compared with a sketch: 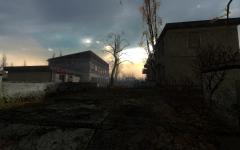 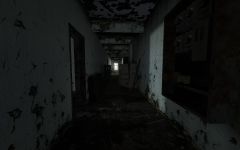 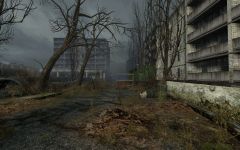 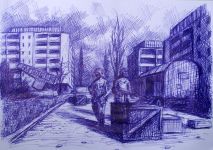 And a short song:

To clear up confusion, let's introduce our little team:

First of all we have MasterDonut, the genius behind all those maps which can be seen on the screenshots in the gallery. He works also as composer.
Next there is UnkSoldieR (yeah, that's me) who's responsible for the story / dialogues etc. and helps to manage the small team. Laidoridas, friend of mine, is an additional story writer.
Let's move to tntsparkz, who is our sound artist and who's really eager to work on the mod.
Our coder is TannerBondy, who is also working on other Source mods.
bLiN_de provides MasterDonut with proper props, since he's a modeller.
Last but not least there's BrigadierWolf. He works as experienced weapon modeller on the armory on which the player will put his hands on.

Eventually we want to thank again Podcast 17 for providing the truth - just check it out: Podcast17.com

the story is awesome and the screenshots/concepts
are the best abandoned area graphics that i have EVER
seen. this is going to be great! Tracking :D

great song The Carousel)))
i liked it/

Love the concentration and detail in the story, great detail all around. My Internet can't handle streaming things for some reason, so I couldn't listen to the song. :/ Oh well.

Have you installed the Adobe Flash Player? Adobe.com It should work with it and Firefox.

And thanks for your interest. ;)

Alright you can make some neat looking maps, but maps can be mae by everyone..

You need animators to get somewhere...

Nice storyline, you've thought this out well, good luck with it all :)

WOW! Thats all I can say about this mod. Very unique and intriguing back story/plot. I give you my best wishes.

I really like the short song. Nice and eerie.

Good story, except the opening line confused me a little. At first it sounded fairly innocent to me, but then it goes on to tell that more sinister experiments were taking place (which is actually the emphasis of the story). So I'm just wondering, is this first line necessary, or is it perhaps too general and can give the reader the wrong idea?

great job, the maps are unbelievable, the plot sounds sweet, and from what i've seen, even the animations r0ck (the sniper vid, holy crap)

@sutsko; have you seen their vids? they got animation covered, and not everyone can make maps, i can't even get the friggin SDK running, lol.