Welcome to today's news update for Task Force Black. First up we would like to present a short video detailing some of the latest gameplay features we are implementing for the modification. The short video below details a selection of them.

Welcome to today's news update for Task Force Black. First up we would like to present a short video detailing some of the latest gameplay features we are implementing for the modification. The short video below details a selection of them.

Up first is a brand new LUA driven decapitation system written by myself Fortran. At the moment it is still a work in progress however the implementation is currently working quite well. This headshot decapitation routine will only occur when the AI is struck in the head by a sufficiently forceful weapon such as a shotgun, .50 cal or sniper rifled. Please excuse both the severed head model and particle effects, they will be changed naturally but they are just there to illustrate the system.

The second section of the video is a particularly exciting one for us and is coded by team programmer Mr.Hankey. Following up on the initial work done in this area by Crymod forum member Oak we are pleased to be present proper weapon penetration with double sided decal generation. Although the code for this was made available by Oak there were a number of bugs which have been fixed by Mr. Hankey allowing the system to work correctly. Alongside these fixes we have also limited the effect to a single depth of (any chosen) surface and will also be implementing variable damage calculations dependant on the depth of the geometry.

The third section of the video is combination of a code change made by Mr.Hankey and also a WIP concept of the opening section of the first mission for Task Force Black made by myself. We are planning for the player and squad to insert by HALO (High Altitude Low Opening) jump into the mission and as such need to portray a 30,000 foot jump. Along side this visual setup the code change now allows for the player to explore the air-space with a free-move on the X and Y axis while free-falling. 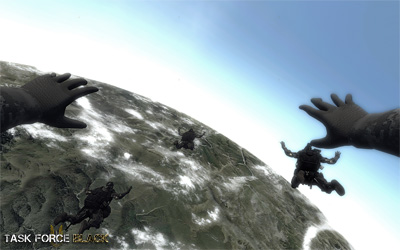 Next up we would like to present a selection of in-game props created by team texture artist and environment modeller BuLL. This selection of assets include a large wall mounted screen, electronic case cabinets, control consoles, mounted oxygen cylinders, a telegraph pole, a 2x4 woodstack and finally a stack of concrete panels. 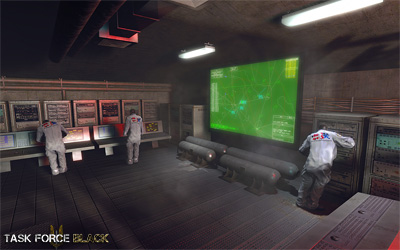 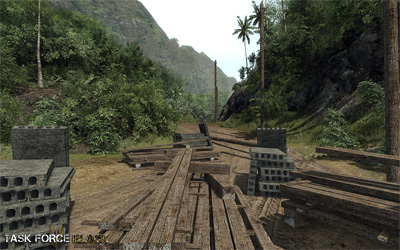 For our next selection of media we would like to showcase the final update to the C8 SFW by team modeller and weapon specialist Mong0ose before it goes through texturing and rigging. The two screen shots below show the baked LowPoly model and the video below that shows a turntable of the final draft of the HighPoly model 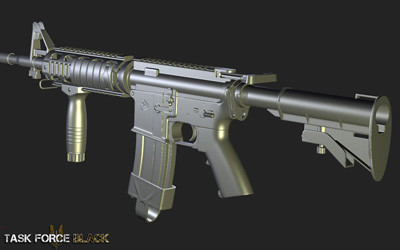 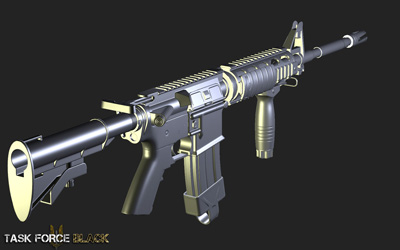 
Finally to close today's news update we would like to present the SAS squad side-arm for Task Force Black, the M1911 Kimber Covert II. LowPoly and HighPoly + bake done by Mong0ose, textures by BuLL and engine import and material done by myself Fortran. The two screen-shots below show the weapon in CryEngine2. Rigging for both the M1911 and C8SFW will be featured in our next update. 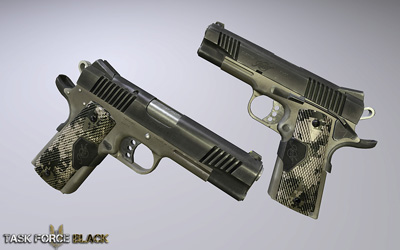 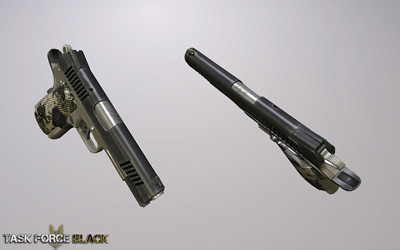 Thanks for reading today's update, we greatly appreciate your support. We will have more news for you soon so please keep checking back for our next update.

Looks great keep it up!

Pistol model and textures is superb... nice work.... bullet penetration is nicely done, but the blood spurting from the neck when the head explodes is a little 80's... maybe have it blow back in the direction of the projectiles? with minor arterial squirts if REALLY needed... lol...

Thanks for the comment, the particles are just stock Crysis ones for the sake of demonstrating the system. We will definitely be going with something a WHOLE lot less slasher B-Movie for the final release lol :).

The fingers of the right hand bended a bit when halo jumping, and the blood from the headstrupms sprayin out... Rooger Rmjet already said that.
Rest looks very nice to me!

The HUD is cool, very clean.
Make the icon that appears when aiming at a teammate last longer and fade out. One second is probably enough.

Looks great, but isn't the curvature of the earth to heavy in this height?