Hey everyone! Is it really June already? Here's our development update since all the way back in late April. We got a few things done. :)

After quite a bit of testing, getting some feedback from players, and re-evaluating some of our designs we have made some control changes. Basically, sprinting has been moved, attacks are now on the triggers/R2&L2, and the previous magic button has been removed.

Holding the roll button (O/B) on a controller will now be sprint as opposed to L2/LB. One issue that has delayed this change, was the limitation of not being able to easily look around while sprinting, since we only have one right thumb. The solution: sprinting will continue as long as the move joy remains forward, allowing you to release the sprint button and still continue sprinting. This also frees up the right thumb allowing you to look while sprinting. Sprinting backwards is still possible as long as the sprint button remains held. We figure the inability to freely look around while sprinting backwards is a reasonable compromise.

This new sprint system frees up L2/LB which allows each side (L2/LB & R2/RB) to correspond to each hand! This opens up other possibilities which have limited us before. We will delve into those another day.

We have also removed the ability/up quickslot as we are working on a better magic system. Based on the amount of spells we’d like the player to be able to use, toggling through them on a single quickslot is not ideal.

The new magic system is still very much WIP, but is functioning. It is much more intuitive than the previous system. Here’s the basics:

It will have something to do with plants… (What’s going on in there?)

I encountered some troubles with the lightmaps (while contemplating whether it’s worth it at times, due to how poorly it runs on our mid-2012 computers), but here’s the next addition to the Town. It also includes:

Now the camera’s field of view increases while you’re sprinting. It really makes you feel faster than you really are, and provides you with feedback when consuming Stamina.

When traversing dangerous areas, or outside of sandbox mode, players will now have the option to respawn after a countdown, if another player is unable or unwilling to save them.

Eventually, we plan to add a penalty for respawning.

Reviving another player without an item will no longer grant a full recovery. Items like the Revive Potion will be much more effective. The amount of Revive potency in an item will determine how effective it is, unlike before.

(They look a lil’ bit better.)

(Improving shelves. And those UVs are my problem.) 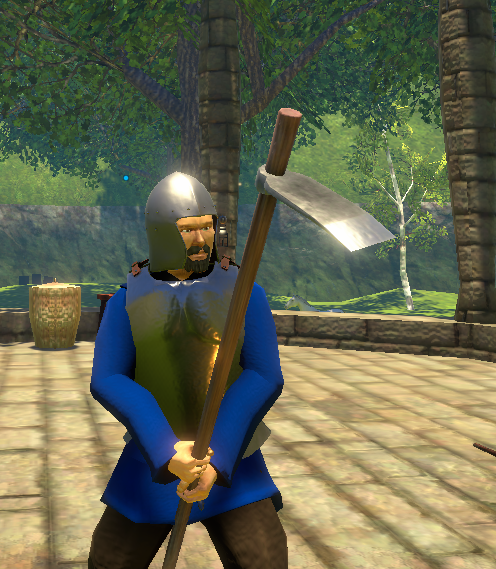 That concludes this update.