In this post I discuss the design process of my tank model from sketches to ingame models.

Today I’m going to share the process of developing a design for the tanks in Digitanks. But first, a quick announcement: I’ve set up a Steam group and a Facebook page, and I invite everybody to check them out.

It was important to me that I get a good design for my tanks, so that they’re memorable, iconic, and cool-looking. I’m going to walk you through my thought process in developing these tank designs. I begin my design with one of my primary inspirations for making this game, the German Tiger Tank in use during WW2. It’s fearsome and menacing, and it kicked a lot of ass in its time. It’s one of the prettiest tanks in my opinion, if a tank could be considered as pretty. Maybe I’ve offended the tank by calling it pretty? I’m sure I’ll pay for that in the afterlife.

I had four initial goals for my tank designs.

The first one is obvious, but it’s actually really important. It’s easy to get creative in your tank design, but when you finally get the damn thing into the game, it ends up looking like a boat or an airplane or a vehicle of some other kind. It needs to scream, “Tank!” when you look at it, I don’t want players to think anything other than “That’s a tank!” when they see my digitanks.

Next the tank needs to look like it hovers. Part of my strategy to make the game development easier on myself is to have tanks that hover instead of touching the ground. It’s very easy to make lerping algorithms that hover the tank above the ground and slide him around from spot to spot, it’s much harder to do the tank-ground collision dynamics that I’d frankly rather avoid. So, I made my Digitanks not just regular tanks, but HOVER TANKS! As such, the tank needs to have some kind of obvious hovering mechanism to explain why they’re floating around like spaceships.

Lastly I want to cut down on the amount of animation required, so I don’t want any moving parts in my tanks. No rotating gizmos or widgets or anything. I’m writing this engine from scratch so it would be nice if I could get away with not having to write any animation code whatsoever.

The first thing I did was break out my trusty notebook and do a couple sketches. The tanks from Tron drew a primary inspiration for me. (I shouldn’t have written all those tank programs!) I love how the turrets are off-center. It makes absolutely no sense from a real tank point of view, how would you even load a round into that thing? But this is Digitanks not Realtanks and so they’re digital rounds that are loaded magically, and it looks really damn cool, so I’m incorporating it into all of my tank designs. 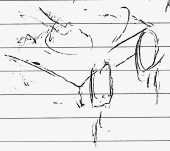 The first sketch was a simple attempt at making a basic tank-like shape. It’s simple, it’s quite obviously a tank. For the hover mechanisms, I stuck on some vertical jet engines. It was the first thing I could think of that would look like it makes the tank hover. At this point we’re just trying things out to see what looks the coolest. This definitely looks like a hover-tank, but it might have some problems on the “which end is the front” thing, since the turret can be pointed in any direction and the rest of the body doesn’t have any defining features. By the way, yes I know these sketches are barely visible and difficult to understand, sorry about that! You’ll just have to use your imagination, and go by the descriptions.

In my next attempt, I decided I wanted to see if I could make some kind of large front-facing surface on the top of the tank. A surface like that could prove useful to put some kind of neat design, and would help distinguish which side of the tank is the front. For the hovering mechanism, this time I tried some hover pads. As opposed to engines, these pads would be more like anti-grav devices that rather than displacing air would simply glow and provide some mysterious levitation power. So we’ve improved on the “which end is the front” deal. On the other hand, now it looks like a certain time-traveling DeLorean.

Deciding to simplify things a little bit, I wanted to see what a very simple shape would look like. The large circle on the bottom represents one large hover pad, as opposed to the four smaller ones. The idea is that the simpler shape will help lend to the tanks being easily identifiable. It does, however, revert to suffering from front-end confusion, and I’m not sure how well the hoverpad really sells.

Scouring the internet for some tank concepts gave me some neat ideas, so at this point I started to branch out and be more liberal with my tank designs. Inspired by the tank from Halo, I created a tank with four “legs.” This time, I put the jet engines inside each of the legs, as if the purpose of the legs is really just to make levitation appendages. This one might have some confusion on identifying the front end, but it looks pretty “tankish” and “hoverish” as well. I think I’ll call her Sheila.

I saw one floating tank with some airfoils, so I decided to incorporate some airfoils into my next design. I also wanted to try to see what a more roundish shape would give me. Getting creative, I decided to try combining the turret and the levitation device into one thing, so in this sketch, the engine is actually inside the turret, and it displaces the air (or whatever they breathe in the Digitanks world… digiair?) directly through the center of the turret. The design is starting to get a little bit more esoteric, but I think we’re still in tank territory, although now it looks more like some kind of alien tank, which I don’t think is necessarily bad. It certainly relates a hovering methodology, as it doesn’t seem to have any bottom side. 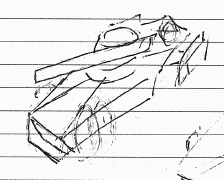 I like the airfoil paradigm, so I gave another try at that. I wasn’t so convinced about the roundishness of the tank though, or the engine being inside the turret. So, this time I placed two jet engines in front, and one in the back, and squared out the design a little bit. Now we’re starting to suffer on the tank identification, this is starting to look more like a boat. The airfoils do a great deal of good in being able to distinguish the front from the back, and I have no problem with it hovering, but it just looks too much like Jabba’s barge.

Armed with my concept sketches, I chose what I thought were the three best ones, and set to work with my favorite modeling software Silo and roughed out some basic outlines of my tanks. Here we have them for a convenient side-by-side comparison:

For the left one I for some reason decided to go against by instincts and use the oversimplified tank design, just to see how well it works in the game. At this point, it looks pretty bland compared to the other two. Bear in mind though that the tanks won’t be nearly this large on the screen, they’ll actually be quite small, so many of these details will end up being washed out. I like the two on the right a lot more than the one on the left, since they’re more interesting. Since I love the airfoils so much, that design ends up being the first one that I try out in-game. 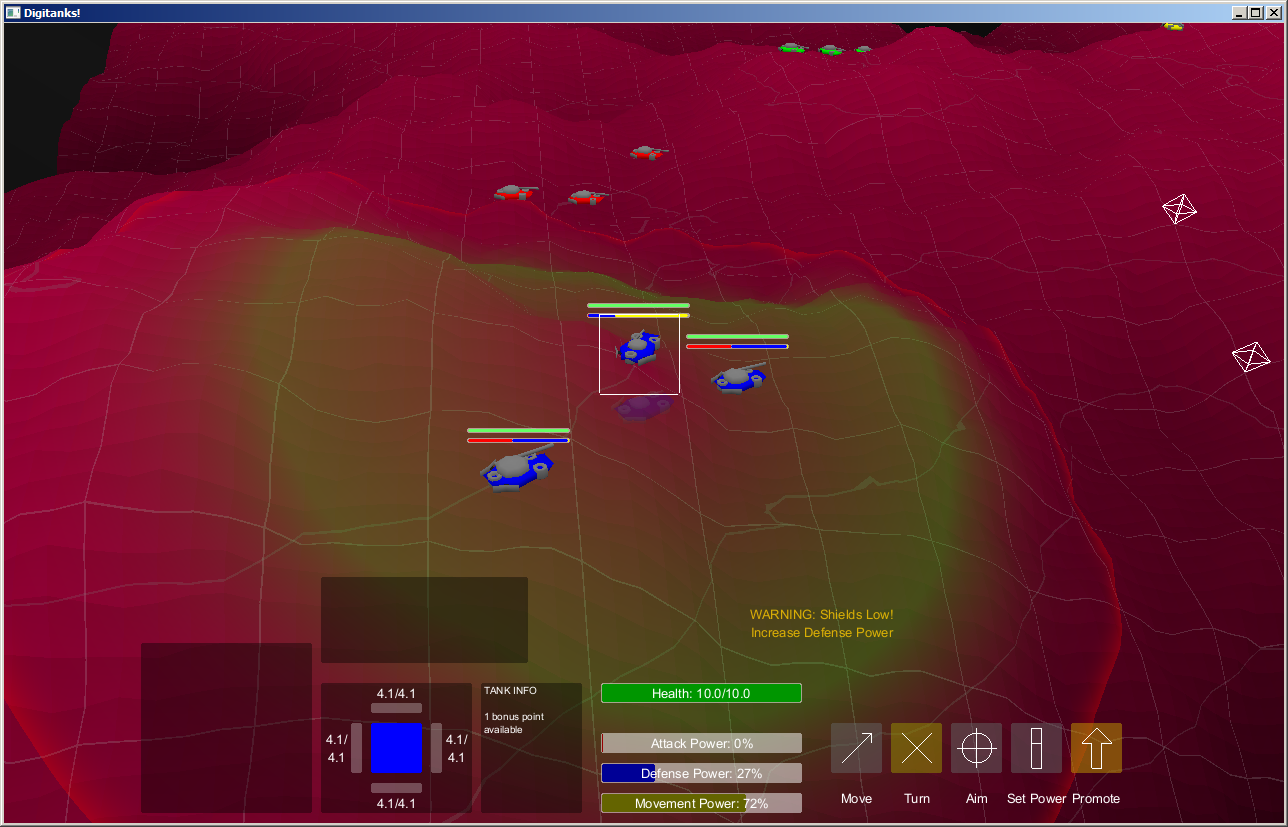 Ugh! That doesn’t work at all. For some reason, those engines totally fail once you get them into the game. They look like three big pock marks on the tank. If they didn’t work on this tank, they won’t work on Sheila either. 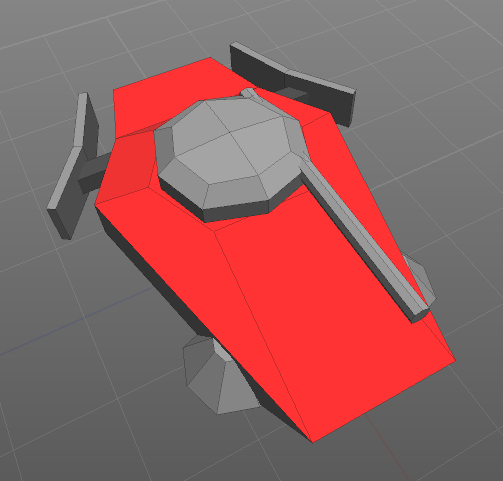 I really like the uniqueness of the airfoils and the roundish design combined with the off-center turret. Those engines simply don’t work though, so I decided to try my other idea, the magical levitation plates. I didn’t really think they were all that strong though, so I combined the two ideas together, taking the flat bottom-facing circle from the hover plate and funneling it up into a kind of conical engine. It removes those huge pock marks on the top of the tank that were so visually distracting, and creates that nice large frontal surface that I mentioned before that I liked. It also satisfies the requirement of being able to tell which end is the front due to the airfoils, and looks a lot more tankish than the flying barge. I think it could stand to look more like a tank, but I’m pretty satisfied with it for the time being, I want to see how it looks in the game. That is of course the end-all-be-all of any art asset, it has to work in-game. My motto is “get it in the game.” You can always go back and do a revision on it, but being able to see it in the context of the game is invaluable. This screenshot also shows the new shield models. 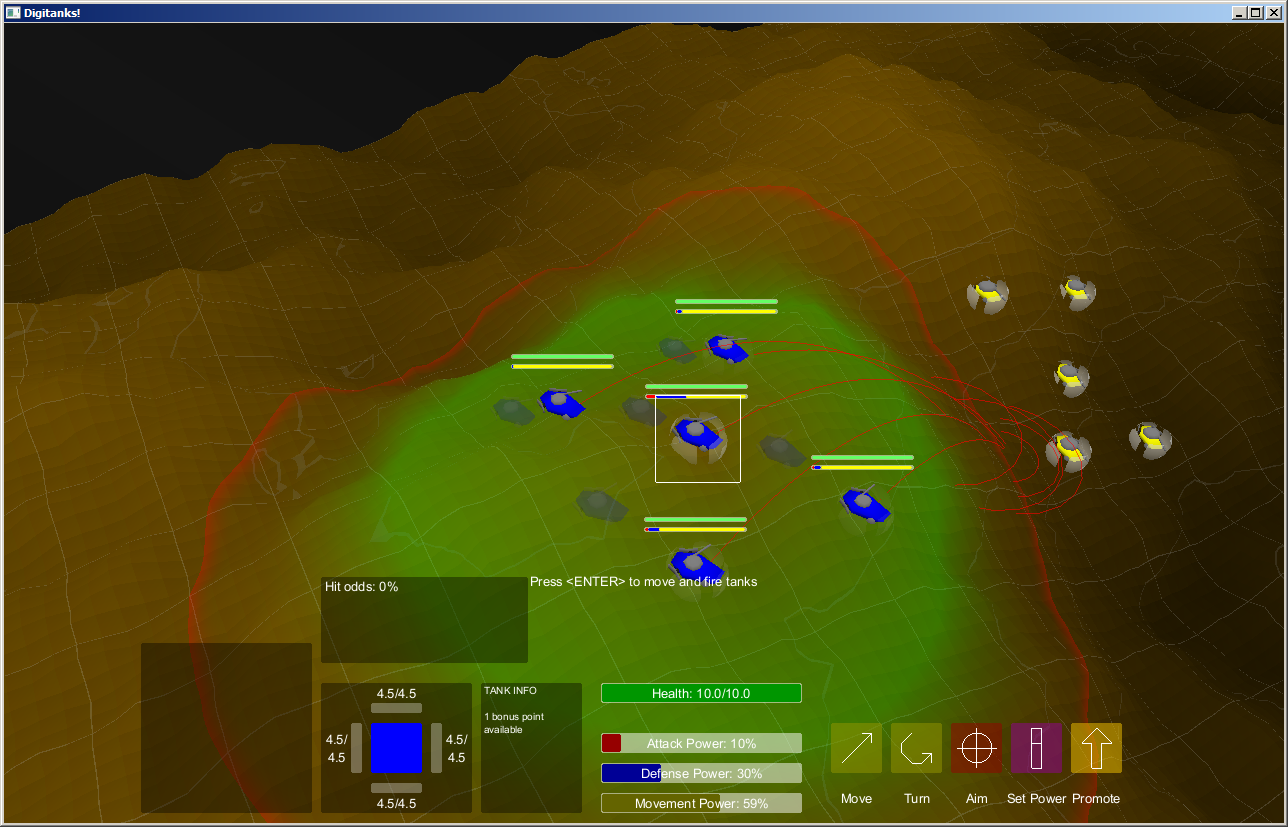 Oh perfect, now it looks like a car. Well, ladies and gentlemen, I guess the moral of today’s story is that simpler is better. We’re going back to the flat tankish design. 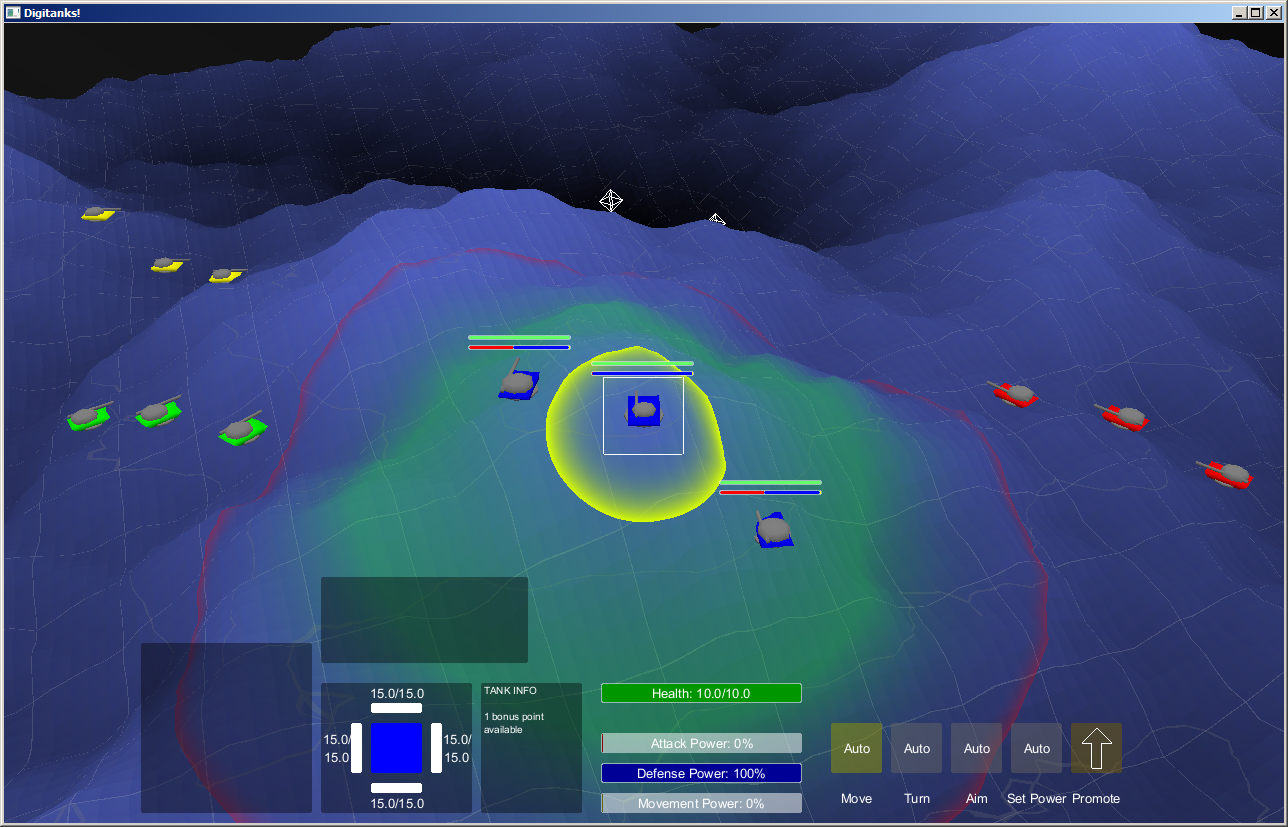 (In case you were wondering, the terrain color has a couple variations chosen at random.) I’m much more satisfied with this design. These tanks are instantly recognizable as tanks. It’s much more reminiscent of the Tiger tanks and the tanks from Tron than any other design. I don’t think putting the panel-engines from the last concept on this one will work, it’ll just make this one look like a car too. I’m going to keep this simple design. It suffers a bit from the “which way is forward” problem, but I think that can be resolved with the offset turret (it’s more towards the back) and with a little bit of texture work to distinguish one side from the other. It doesn’t really sell on the hovering part, but putting some glowy stuff under the tank and a shadow on the ground will help that.

I’m going to keep the airfoil design for later. I still like it, maybe I can find a way to make it work. For the time being though I think the simplest design wins. That’s it for now, on to the next task!

How about making the foils around the whole side of the tank like skirting?
I may make the tank look more menacing... or a lot worse.
I really like the final design including the foils, but yes, it is a car from a distance.

With your current design, how about placing a small exhaust behind the turret. Large enough to stand out and say 'this is the back' but small enough to be judged insignificant.

I really liked this post about how the design has evolved, hope to see more :)

That sounds neat... can you draw it for me? I'm a real visual person. MSPaint will do.

That is a really bad representation of what I mean :P

You might want to look at the Panzer IV with shurzen:

That is one example

Neat! If it were thick enough it'd almost look like a side-car. Thanks, I'll bear that in mind when I go to make further refinements.