When reality interferes, drastic measures are taken. At BZSmod we are some who wants to be 100% ganbaru* and hence we proceed with the second step of the fighting system.

We have created a simple system to handled ranged attacks (kido attacks), which in its simplicity is a list of possible ranged attacks that we can scroll though.
By functionality, it is implemented and works just fine. UI however is a bit of a hurdle, as the selected kido on the server side has to be returned to the client and then rendered.
We still need to expand the selection of kido attacks, but there has been sparse time to focus on that task.

A fighting game without melee combat wouldn't be very interesting. We want to make the experience fun and challenging, with room for diversity and counter attacks.
To accomplish that, we have been inspired by other bleach games, and fighting games like Metal Gear Rising: Revengeance

We want to make the it possible to make different combos, so the melee part of the game isn't the same repetitive action (well unless you make it so).
The idea is that a left click will perform a sword swing and a right click will perform reiatsu related attacks.
The reiatsu attacks can be slightly ranged, but it will vanish after a short range. It is neither as strong as a kido attack and opposite a kido attack, a reiatsu attack can be blocked. Reiatsu attacks will also consume a small bit of reiatsu.

This diagram made by Roei gives an example of a possible combo tree. 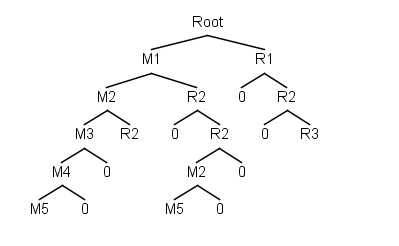 Each character will have a combo tree. We expect to do some QA testing to ballance the trees to each others, and to ensure diversity, which could make some generally unfavorable combos good in certain situations.

Coding
While we are 2 M.Sc students who can code this work by ourselves, we don't have a lot of time to cover the work.
Out goal is to implement a basic functionality which is playable by January, and then revisit our milestones to decide what we do next.
In worst case, it means that we could end up abandoning some of the "nice to have" features if we aren't satisfied with the system by then.

Hence we would give the opportunity to other programmers to joins us in creating a bleach TPS-mod for the PC market.
BZSmod has always been about learning and working with a project that can be realized.
We don't expect you to have a B.Sc degree. Only that you have some experience with c++ and are willing to work with pointers.
So if you want to add something to your portfolio, train and perhaps learn more about programming, or you just feel like aiding us a hand. Then take a look here: Moddb.com

Animation
As our implementation progress, our animator could also use a hand.
There is no specific job ad on moddb at the moment, but if you are interested, then you can take a look here: Bzsmod.com
Some of the work is already done, but you can be the one who will be creating some of the combo moves, taking BZSmod to a new level of awesomeness.