Swipey Rogue is a mobile arcade mashup of one touch action runners and a top down grid based rogue like. Imagine if Crossy Road and Demon Souls had a baby! In this second dev update, we show you how levels are being created in the editor and play the game on a phone for you! As an extra bonus, there's an animated gif showing the newest dungeon tile: the lava pit trap! Beware, don't fall in... 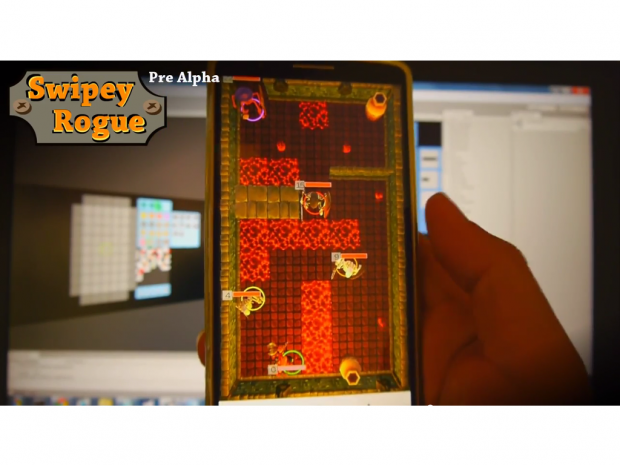 As described in the summary, Swipey Rogue is a cross between mobile one touch control auto-runners and a top down grid based rogue like. I wanted to play a rogue-like dungeon crawler on my phone, but I wanted something fast and engaging like an arcade runner or flyer. From these desires Swipey Rogue was born!

While the target platform is definitely mobile devices, I intend to make PC/Mac/Linux builds as well. I enjoy small games that can be played in parallel with other desktop tasks in non-fullscreen windows. I this is a perfect companion game like that.

OK, on with the update! Here is the first video update. I walk through how I create levels with the level editor tool that I wrote and play through one of the more difficult levels I've designed so far.

Here's a composite view of a level using the trap in the edit window on the left and also the top down gameplay view through the game camera on the right: 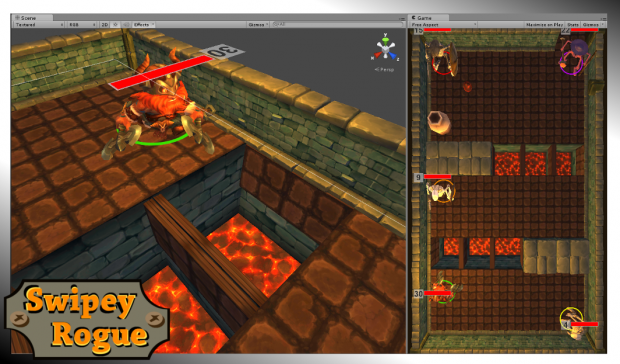 And here's a 3/4 view of the trap. It functions like a normal ground tile, except it opens periodically. If the player walks over it while it is not fully closed, they fall to their death in the lava, muhahaha.