Swipey Rogue is an arcade mashup of swipe-action, auto-running and dungeon-crawling, room-puzzling. Challenge Saga mode gives you 200 pre-designed challenge rooms across 4 unlockable world areas with 3 challenges per room, achievements and leaderboards. Free Running Mode gives you procedurally generated labyrinths to run through while ranking up your character and collecting perks. This update outlines the Rank-Up and Perk System and demos gameplay with a video. 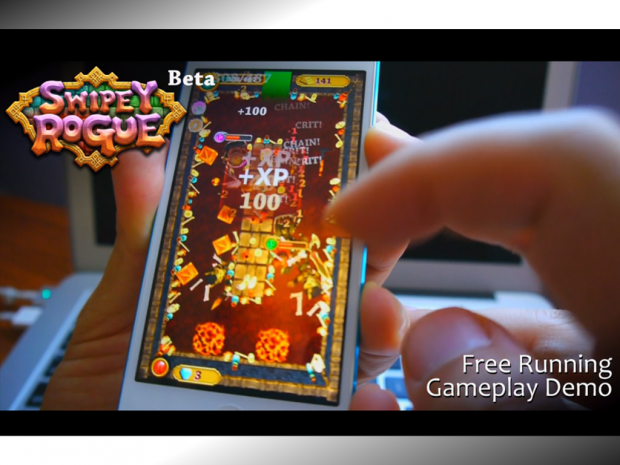 Free Running mode has been getting the finishing touches this week. I've completed the Rank-Up system and all of the Perks. This update focuses on how that system evolved, what the perks are, and how it all plays.

This video was shot completely "unscripted", I just jumped into the Free Running mode and chatted while playing. I got a pretty good run (got up to rank 6, and had a cool combo of Increased Chain Damage Chance and Increased Critical Chance).

Evolution of the Rank-Up System:

In this mode, you rank-up very quickly and you die quickly and often, and it’s perma-death. I wanted to create a sense of urgency to explore rooms quickly and defeat enemies quickly so you get xp quickly and rank-up to get perks. That’s the cycle that feels fun in this mode so the tighter the loop the faster the feedback and rewards.

Anyway, after creating all the perks I realized they fit nicely into categories and could be represented on a progressive skill tree with locks and branches. I mocked up the interface and lived with it in the game (non-functional) for a while. 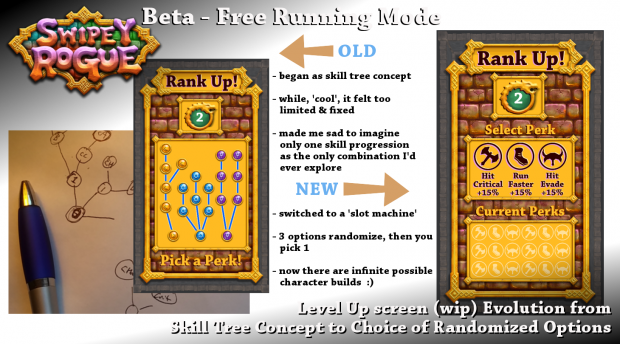 After deeply searching my feelings I accepted my gut reaction that this whole system actually felt limiting. The point of this game is to play it over and over in quick sessions. It made me sad to imagine that there would only ever be one linear skill tree that I could explore and experience.

The obvious option is to add additional character classes that would have different skill trees, etc. However, this game is already over-scoping itself at every opportunity (even though I’m generally conservative about not extending scope). The idea of adding additional classes is something that could be explored in future updates or other games.

For this game, I wanted something that felt fresh every time, and offered a lot of “ups and downs” by turns of luck. Using a slot-machine system that randomizes 3 options then lets you pick 1 introduces the “wildcard” element to the experience. Anything can happen each time you level up, you might be presented with your favorite perk every time! Perks layer, each time you’re presented with one, if you’ve already picked it before then it will now offer a more powerful version so their power stacks and stacks.

This direction excites me, while the other direction made me sad. I think it’s important to pay attention to your feelings when dealing with game design decisions. I'm happy I went this way. I enjoy playing just to see what combinations of perks I get.

Free Running mode gives you continuous procedural labyrinths to run through while ranking up, and building your character abilities until death.

As you are playing a run, you collect XP for:

You rank up very quickly at first. Within the first couple rooms, if you're killing enemies, you'll rank up immediately. And the next couple ranks come pretty quick also. The increase of the required XP for next rank starts to become more noticeable after that, but most people should hit at least rank 3 on any given run. I've gotten up to 9 once. It. Was. Awesome!

Here are all the perks in the game (they are all stackable):

Here's some (work in progress, perk art still just concept) shots of the UI that is going in to support the perk system.

This one shows the pause screen, and the Rank-Up screen. Both show all the possible perks. The one's you've earned this run will be highlighted with their current value listed. If you get the same perk multiple times, it's power keeps increasing (so for example, "Critical Chance" will be 15% first time, then 30% next, etc). When you Rank-Up, three random perks are offered to you (slot machine style reveal) and you get to pick one. 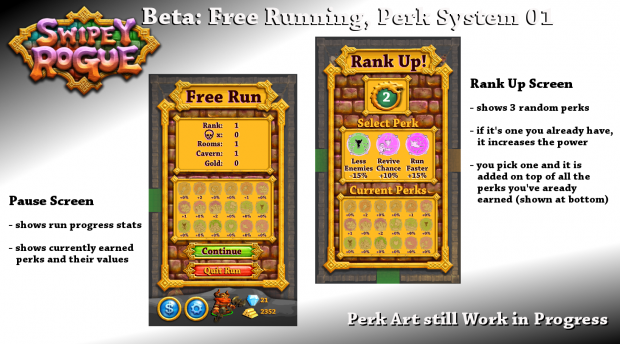 This one shows the in game HUD that displays the current perks you're running with. Each time you Rank-Up and pick one, it will be added to the hud (good reminder while you're running). The death screen shows your cause of death, then the run summary shows your run stats and all the perks again. You can continue with gems (earn gems by completing challenges in Challenge Saga mode, or buy them with gold you collect). The continue cost doubles each successive continue (and resets when you start a new run). It's not really meant to be a game that you keep continuing, it's more about those single runs, but the option is there if you want to spend your gems. 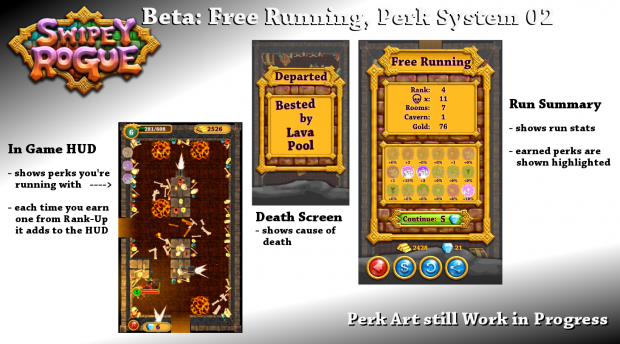 And here's a little preview of the perk art. Anthony is going to make this set for the game as one last addition. 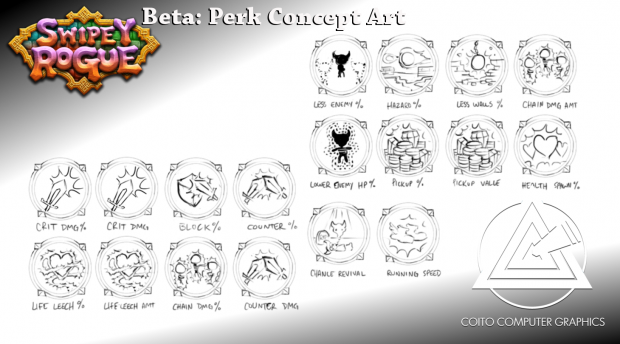 Wow, Swipey Rogue has come so far. I made a side-by-side, before & after collage for Screenshot Saturday to show the progress from my placeholder art to the final polish. It takes a lot of perseverance to stick with it and know how much it will evolve.

Here's a side by side of the menu flow for Challenge Mode. Everything has changed so much. It's nice to see it all come together. I still can't believe how much it has changed. I'm glad I have all these old screenshots and old builds to be able to compare 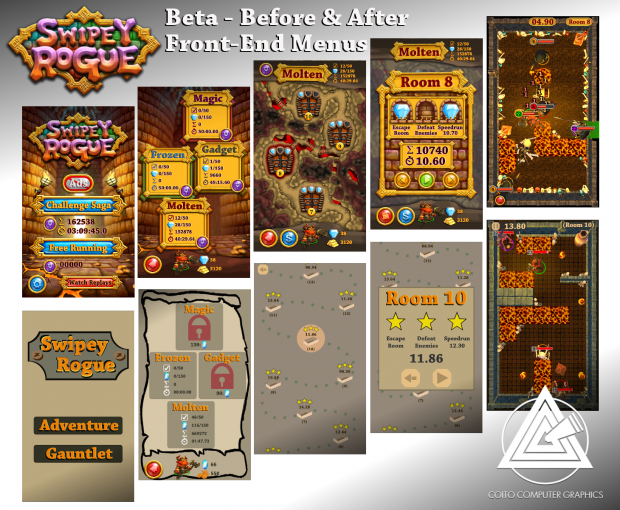 Thanks again for dropping by. I'm going to finish a bit of regression testing with the iOS build right now. I updated the plugin that I'm using for social and IAP and I want to make sure it's all still working as expected.

After that, I'll post the build to Apple and put out a call for a real Open Beta Test. Stay tuned!