News related to the future SWAT: Back To Los Angeles 1.2 release.

Back To Los Angeles v1.2 release

Here we are again with some news about the improved 1.2 version. There were a few problems with the last 1.1 version that had been reported and i took my time to improve, let's start with a list of the reported issues:

All of this issues have been taken care of for 1.2, and, of course, lot of improvements have been made for the next release. I'm sure this will be a great improvement over 1.1. This is a quick summary:

Let's start with one of the most important aspects of the game: equipment.

For 1.2, some new weapons have been added. For example, the Glock 18 has returned, i wasn't willing to keep it for the last version because the Glock 18 was poorly implemented in SEF, however, i've wanted to take care of this and now it's a good secondary weapon, of course, it comes with a suppressed version but it doesn't sport a tactical flashlight. Some 14" barrel versions for shotguns have been added, labeled as "Entry". This Entry versions will cut a lot of weight and bulk from your loadout but they carry less shells on their magazine (4+1) and they have a worse spread, being only suitable for very short distances. New Aimpoint variants have been added for weapons like the MP5K, MP5K PDW and P90. Some magazine sizes have been improved too.

Some misalligned Aimpoint sights have been improved as well, although they weren't really misalligned since the shot went directly at were you aimed, their model wasn't properly set on certain weapons so they wouldn't look alligned with the iron sights, making them feel like they were misalligned when they really weren't.

Remember how protective equipment wasn't as useful as it was supposed to be? This has been taken up a step further, (some MP users said that body armor wasn't that useful in SEF, the weight/bulk tradeoff wasn't worth it) so now they truly protect you from ballistics. Of course, this won't make you invincible, you still have to consider that Level II armor won't protect you from rifle rounds, but you won't go down as easy as before, this was carefully done to maintain the game balance. The same goes for helmets, their protection has been improved to suit the same purpose.

SEF v7.1 included a configuration menu for weapons in a similar way to modern FPSs that i plan to add to BTLA at some point, great for helping you choose your favorite configuration in a matter of seconds since we have a lot of them now, for example, the AKM has 8 configurations, MP5 has more than 4 versions, most of them with 4 configurations, and navigating in a tab with more than 20 options in it can be tedious . I still need to learn how to properly implement my variants on this menu but this will be added on a future release.. we'll see.

We already know that SWAT 4 AI is great sometimes and gets worse some other times, still, there are a lot of things that can be tweaked to make it better. For 1.2, i've wanted to improve the AI's combat behaviour, remember how in SWAT 3 suspects were hard to deal with? I've tried my best to replicate this, so now AI reaction times are much more faster, they will wait less to shoot at you so you will have to act quickly, this is can be easily spotted on Medium to High level suspects, also, they are much less hesitant to shoot at you when fleeing. High level suspects are truly professionals now, they won't fire on full auto more than a few miliseconds to not waste bullets and also, they are much more accurate than your regular suspects, in par with SWAT officers. They have an increased chance of shooting at opening doors when barricanding too. One important SEF feature was that suspects would lock doors when barricading but this didn't always happened, i've increased their chance so now most of the times, they will lock doors when fleeing and barricading. Suspects are much more willing to flee if you don't cuff them as soon as possible, this is a very erratic feature however, but i think that i've improved it a bit. To compensate this, Officers AI has been improved too, they'll wait a few miliseconds before shooting at uncomplaint suspects, they are much more prone to taking cover now too. If they can't hit a target, they won't waste bullets. These are some major changes, there are some more things to it.

Back To Los Angeles 1.1 had some major flaws that i've wanted to address for a future release, the first thing being some wrong muzzleveloticities on certain suppressed weapons that would make some suspects bulletsponges this was due to some values that weren't properly tested so i apologize for that, this new version will have these values corrected to prevent those frustrating things from happenning again. Tactical aids slots have been expanded so now the first 3 slots are for grenades and the last three for Wedges, Optiwand, C2 and Pepperspray, I've noticed that , formerly, you would have to choose between carrying wedges or C2, a bit frustrating thing if you ask me. Some weight values have been corrected, especially for magazines, remember how the UMP was lighter than the MP5 but when equipped it weighted a lot more? That was due to a magazine weight from SEF, i've took my time to search for bullet and magazines weights to make a complete list with fixed values and implement them into the game and i'm very happy with the results.

Movement speed has been taken up a step further, now "Stealth" and "Dynamic" (walking and running respectively) have been improved to fit those roles, so now walking is a truly jury-rigged stealth mode, you walk a lot slower to prevent alerting suspects, and on dynamic mode you run a lot faster (this may vary between armor types). Crouching was as fast as walking for some reason, this has been improved so now it's more stealthy than walking. This changes also affect the AI hearing radius (Yes, the AI can hear your footsteps.)

Iron sights were a tricky thing in SEF, although they were awesome, they had a zoom effect that looked ridiculous. Most people opted to removed the zoom but this would make most iron sights harder to see since they would be pushed further away from the screen. My goal is improve this. Now iron sights won't display a zoom effect, instead, the iron sight position has been set closer to the screen to simulate what you would see in real life, heavily inspired by Insurgency: Sandstorm. This is as good as it can get, do note that not every weapon will have this since is not needed (Pistols and some specific less lethal equipment.) You can expect a much more dynamic gameplay from this, i promise. 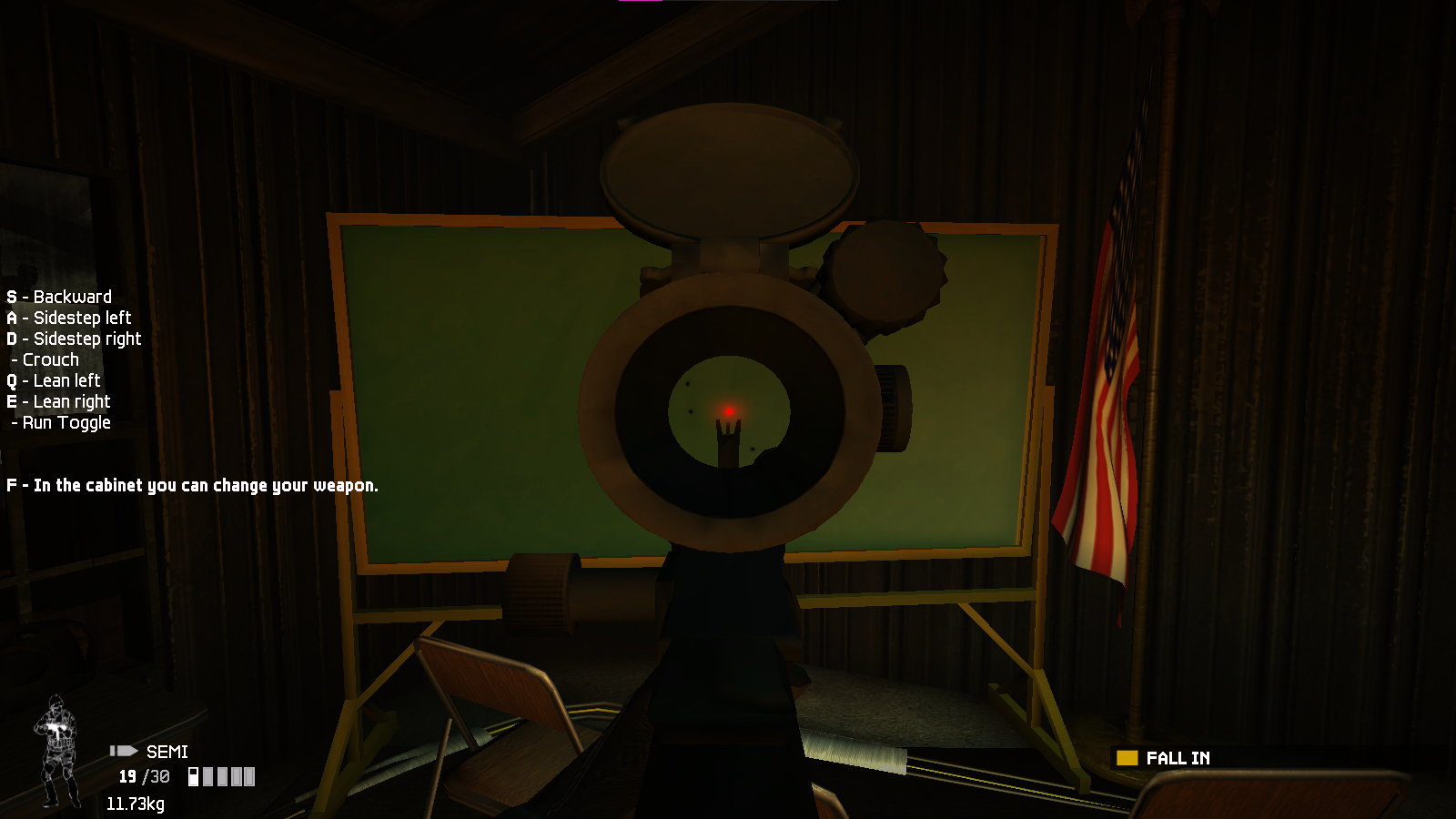 Shotgun spread values have been improved, remember how 18" barrel shotguns like the Nova had a huge spread? Non-sense, that's a common game cliche. With some good reference videos and some research, i've managed to improve this issue, now shotguns are truly viable, especially when loaded with Sabot Slugs. Of course, shorter barrel shotguns will have a bigger spread since it's like they work IRL. You can now expect to shoot targets at longer distances due to a tighter spread without the pellets being everywhere except your target. 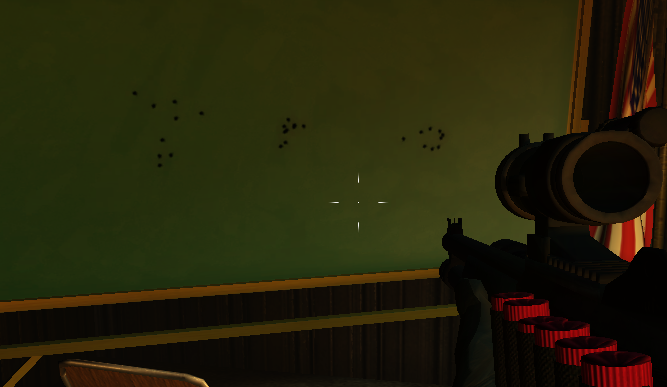 From left to right: Long, Short and Medium distances: 18" barrel

Keybinds have been reverted to the default ones since a lot of people didn't liked those, do note that you will still have to hold shift to run and C to toggle crouch since i think that they make the game feel a lot more dynamic.

Flashlight size has been improved so now it looks bigger, a lot of people complained that it was too tiny, so i've did some research on the matter and managed to get a good looking light, i wish i could make it different for certain weapons since i doubt that a pistol light has the same size as a rifle one but it is what it is.

This is a quick summary, there are some more improvements but these are which i consider the most important. As always, don't forget to join our Discord. Cheers!

Enjoy this beautiful teaser made by Mantas!

Make sure to take a look at the mod's Github.com that has been recently opened!

I would love just the iron sight thing. Sef's Ironsight is really bad.

Can you do the magic to make it move while leaning?