Team Flix take Eden Star to the excellent Staffordshire University to give the students the opportunity to help test and design ideas for the early access of the game.

Firstly, we apologise for the lateness of this post!

The Team at Flix have been meaning to report on how we intend to support development on Eden Star for a while, but have been very busy with the release and more recently, the re-design and development of updates.

We have a hot-fix coming out very soon that should take care of a few of the current build's issues and crashes - if you have problems launching Eden Star, please let us know so that we can look into it for you as soon as possible.

Check out the Public Trello board this week for a load of additional component updates including concepts and designs (flowgraphs etc.) :: Trello.com

To support Eden Star and provide the best possible platform for the game to evolve, we only felt it right to conduct tests and collect feedback first-hand, external to Early Access, both prior-to and during the lifetime of the development cycle (at least - that's what we're looking to do!). Late 2014 we had the first of our mass Community Vanguard days (a focused playtest and feedback day) for the first properly playable build of Eden Star in UE4.

The first event was held at the super buff awesome Epic Games Lab at the ever incredible Staffordshire University (Near the middle of the UK).

To comment on and see a full list of all the ideas generated by the attendees on the day, along with feedback from our designers JT and Marcin, click HERE to view and comment within the Eden Star Steam Forums.

We had an overwhelming response to the call for registration with capacity being reached within the 48hours of release. On the day over one hundred and twenty attendees assembled in the foyer of the Epic Games Lab at 9am, caffeinated and brimming with anticipation to get their hands on Eden Star. We saw some incredible creations by the end of the day, our favourite being the lovingly named "tower of death"; a huge tower with more gun turrets than we could count!

We also had the guys and girls reporting a number of interesting bugs, one involving a fountain of hundreds of Splintermites shooting high into the night sky. Another involved turning tree trunks into surfboards and flying across the level like the Silver Surfer. These have now (sadly/gladly) been fixed. 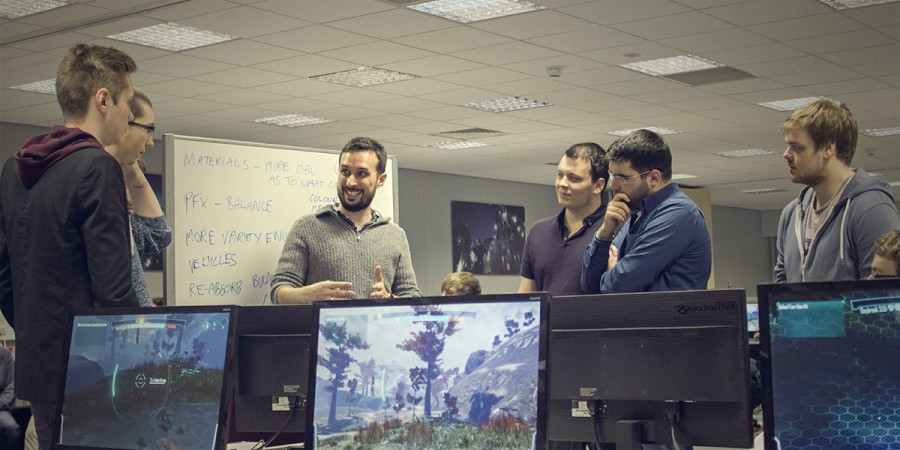 In the afternoon the 120 Vanguard split into groups to work with the Flix Team to review and design new features or amendments to current features for Eden Star. The ideas that came about in the afternoon where varied and great input for the game. The quality of input, the imagination and the passion of each team to improve the gameplay experience, was hugely encouraging.

There were many great ideas that fit with the world of Eden Star, some that filled an essential niche, others that we have, in some form, already planned to include. Proposed features included a quick-travel module, companion creatures and robots, natural hazards, mining explosives, as well as an armour customisation system, and a jetpack! 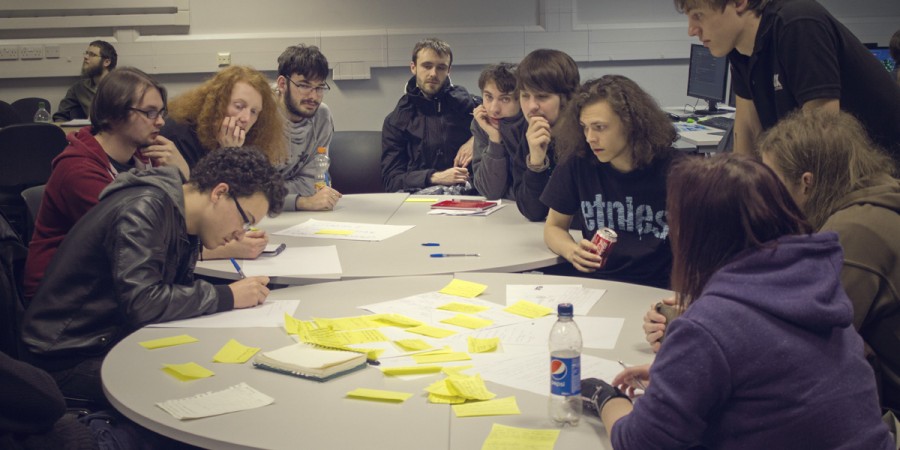 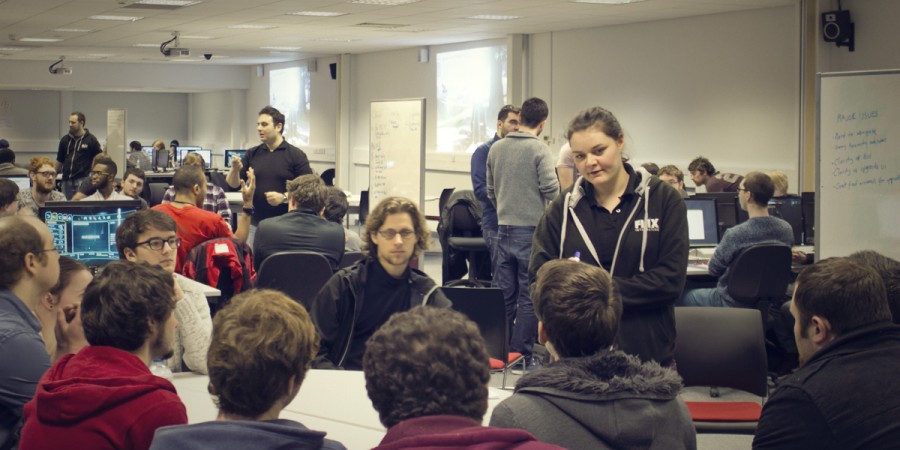 We promised to choose, announce, and implement the winning idea, whilst, of course, crediting the brilliance of those who came up with them. The decision was difficult, because great ideas were plentiful on the day. In order to come to the conclusion we looked at the pitches through a the following criteria;

- How much the feature adds to gameplay in general

- How well thought through the pitched design was presented

- If the idea fitted with the continuity of the game-world 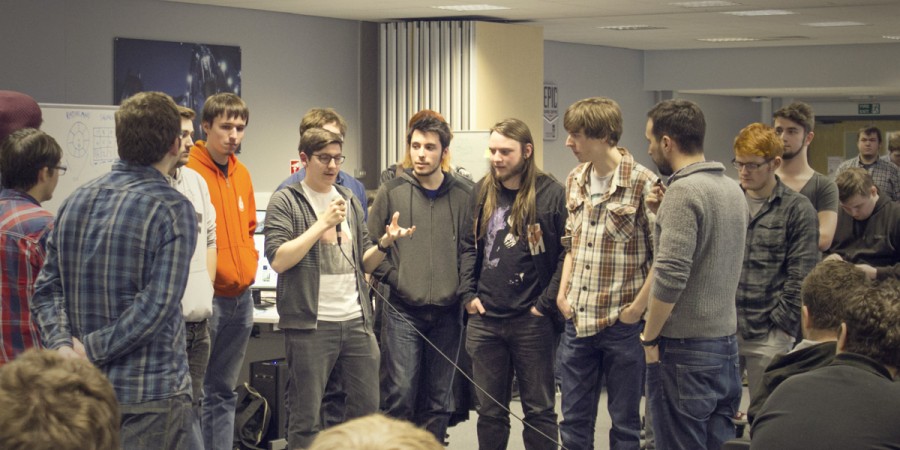 Firstly, we would like to give honorable mentions to the runners up, whose ideas fitted very well with the game and we would love to see implemented eventually.

EM Harvester - Team Harvest
This idea involves a temporary, robotic, harvesting drone that can be placed in the world to gather nearby resources over time. Mining Upgrades, Utilities and Robotic Allies are features that we’re excited about as possible future additions overall, but this one, especially, has very exciting possible gameplay connotations. Just like thumpers from Firefall it gives you a way to mine surfaces otherwise impossible to penetrate, adds a short term goal of protecting it while it’s working and adds a small gamble aspect, because it would produce semi-random materials.

Discovery Journal - Team Arkade
This team had the idea for collecting information in a journal or Pioneer Encyclopedia that you complete as you explore the world. Finding new Enemies or Materials would unlock information about them. This is something we would really like to add as it gives the player more natural objectives and has a definite completionist appeal, not unlike Pokédex. One thing left to explore are the gameplay-oriented benefits of “unlocking” journal entries.

Enemy Biomes - Team Splintermite Fog and Team Red Sparks
Enemy areas or ‘Biomes’ are something we are exploring as we speak, but they are a technically challenging subject. We agree that the world of Pharus7 would have life breathed into it by truly alien environments. The teams proposed that the alien landscape should expand and terraform around hives, very much like Zerg creep from the Starcraft series. We are planning to reverse that dynamic, meaning that the planet should start completely alien, and it should be the Eden Kits that terraform it to more familiar environments. After all, it’s the Pioneers who are the invaders.

And so last, but definitely not least are our winners:

Quick Build Menu - Team Avengers and Bilbo Swaggins
The basic idea was to be able to quickly craft structures on the move, without having to enter the construction menu every time. One team proposed a radial menu, the other a more classical grid solution. We liked the idea of a simple ‘Left click to place, right click to create’ functionality, which is what we have used in our own Quick Menu design. This one had won, because we believed it would enhance the game the most as it stood at that point in time. So credit where it’s due, the first iteration of the Quick Build feature was implemented even before release with great success, all thanks to these guys!

The members of the Teams above will get their names listed within the Credits as Designer Vanguard and we will return to them for feedback at a later date so that the vision for the mechanics are kept in check!

All of the attendees on the day will have their names as Vanguard listed in the Eden Star credits with special thanks.

To comment on and see a full list of all the ideas proposed, along with feedback from our designers JT and Marcin, click HERE to view within our Steam Forums

We plan on running more of these test and design days over the development of Eden Star, so please tell us what you think and if you would like us to hold a Vanguard day at a University near you.

To keep up to date with our development and future plans, head on over to our Public Trello Board. Please note, nothing is guaranteed to make it into the game until it's in that right hand column of ‘Current Features’.

Ah man, that would be fun! Going to university to gets the new generation involved. :D That actually gives me an idea of what I can do to build a better community around the University of Arizona here in Tucson.

Cheers guys, your work looks great on all those monitors.

It's great getting Universities and Colleges involved - a lot of the students we have the pleasure of meeting are incredible and are already developing great content - couldn't recommend it more and it benefits all involved!

Thanks again for your support