A 2-button arcade multiplayer game being developed for OUYA. We had hoped to win a devkit during the #MyOuyaGame contest on Twitter. Seeing as it's only one day and one kit left, we should have made this IndieDB page sooner.

Super Space Bucks is a 2-button arcade multiplayer game with cutesy graphics and simplistic gameplay that is easy to learn but hard to master. 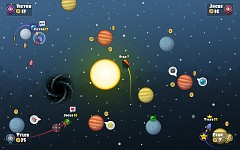 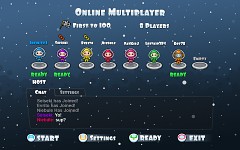 We're developing the game with the intention of releasing exclusively on OUYA in the middle of April.
We had hoped to win a devkit during the #MyOuyaGame contest on Twitter. Seeing as it's only one day and one kit left, we should have made this IndieDB page sooner, to get some more publicity.

The previous week has been quite crazy, this whole OUYA contest really forced us into the whole social media thing with twitter, facebook, youtube channel, forums, blogs, etc.
It's a lot more than we first realized and it takes quite some time to get the ball rolling.
As typical indie devs we'd rather work on the game itself, but it's really cool to connect with all the other people out there making indie games. There's a lot of cool stuff going on!
This weekend we were struggling to get an early gameplay video out, which we did.
But the netcode being all wonky and barely tested only allowed two players at anyone time.
You can watch the video here.

The game is in a pretty good state and I'm really optimistic about our deadline.
I just hope we'll get done early and be able to add in more stuff and extra juiciness.