(I am currently typing with my right pointer finger in a splint, so don’t pay attention to any strange typing) Hey there everyone, in case you were wondering, the mod is not dead. I just haven’t been able to do much lately. But now school’s over, so to celebrate I bring you the first of a series of weekly updates! This one focuses on the Galactic Alliance Remnant’s navy. As more ships are added later, they’ll be included in other updates as well.

(I am currently typing with my right pointer finger in a splint, so don't pay attention to any strange typing)

Hey there everyone, in case you were wondering, the mod is not dead. I just haven't been able to do much lately. But now school's over, so to celebrate I bring you the first of a series of weekly updates! This one focuses on the Galactic Alliance Remnant's navy. As more ships are added later, they'll be included in other updates as well.

Now back to this update. While some of this information may be redundant for some of you who have been following the mod, it explains the ships more in-depth and also educates new comers. These updates will focus on ships that are exclusive or near-exclusive to the Legacy Era, as most know about the ships from other periods which will be available early on in the game.

These ships are only available at tech level 3 and higher. Other out-of-date ships are the only ones you can buy at levels 1 and 2.

Starting from the bottom up, the first ships are the fighters and bombers. 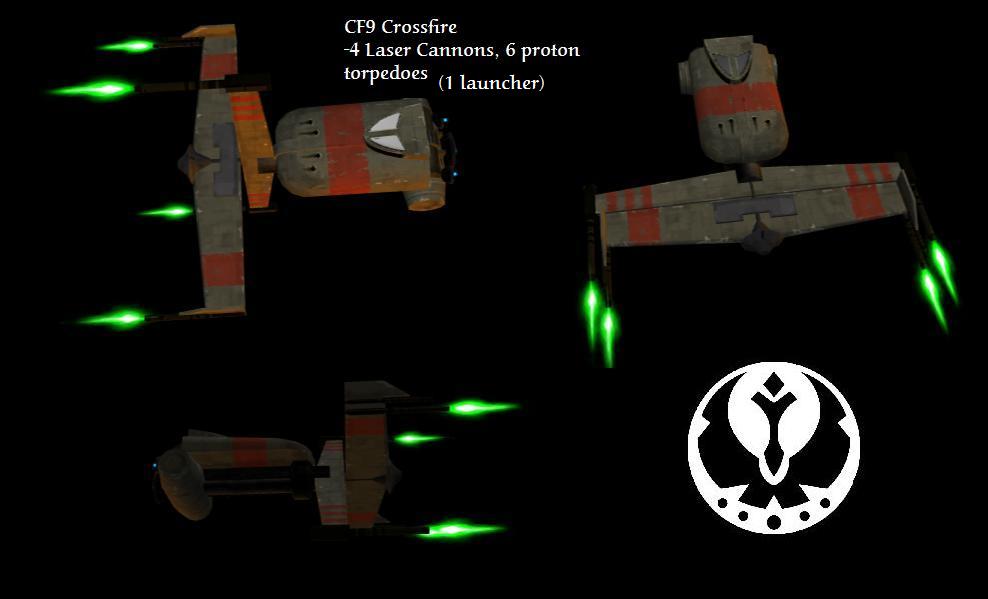 Physical Characteristics: The CF9 is produced by Incom Corporation. It is slightly shorter than the X-Wing, though it is bulky. A major difference is its S-Foil configuration. The back S-foil can rotate, folding away for landing and dropping down for combat to form a cross-shaped configuration. In attack position, the wing mounted laser cannons fire in an intersecting cross pattern, giving them longer reach than most starfighter based weapons. It is shielded and hyperspace-capable.

Role: Incom designed it to be being perfectly balanced between speed, maneuverability, durability and firepower, though it is not exactly the apex of their designs. It is not as maneuverable as the Predator Starfighter, but has better shields and armor. This fighter is tough and can take a punch. 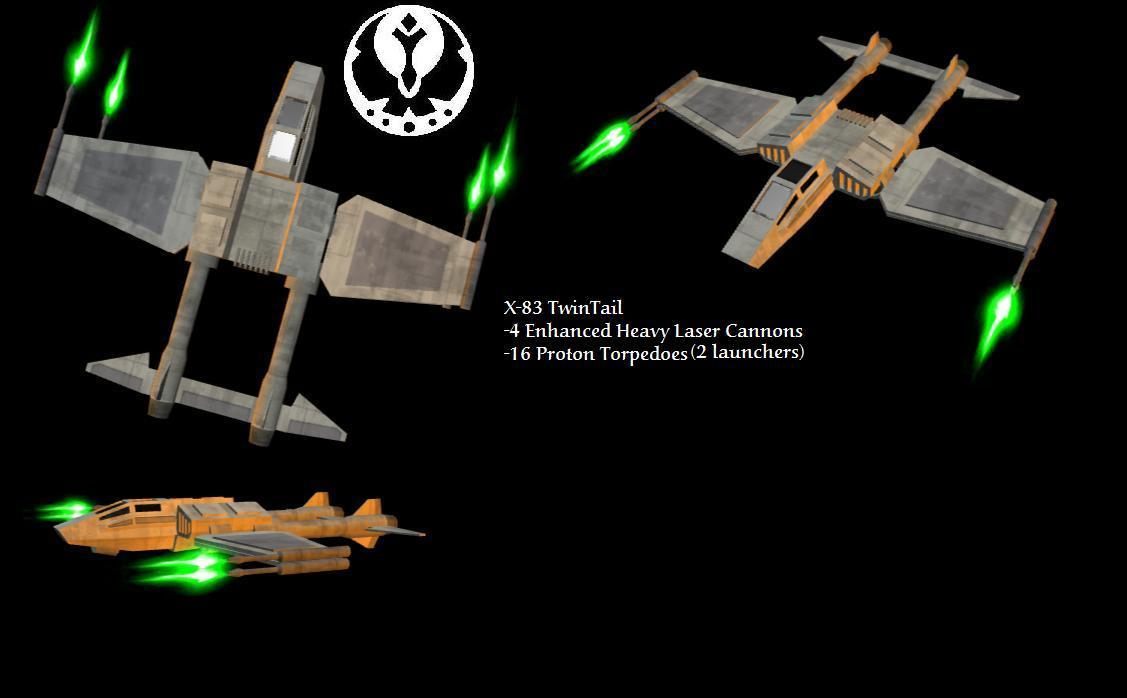 Physical Characteristics: It is also produced by Incom. The Krayt Empire actually banned the sale of such fighters, but they were still produced anyway. It looks much more like the X-Wing than the Crossfire does, and has the familiar X-shape. The X-83 is one of the most cutting-edge starfighters of its time, made with superior components. The fighter's shields are comparable to those of a transport or light frigate, able to absorb a good deal of fire before they fail. Its hull is also stronger than those of most shuttles. It also comes with a hyperdrive. In one-on-one combat, the X-83 is easily superior to most contemporary fighters, and even when outnumbered is capable of inflicting heavy damage on the enemy.

Role: Before the fall of the Jedi Order, the X-83 was used by that organization. They have a reputation for durability, and are well suited to front-line service. They are elite fighters, a superior marriage of offense, defense, and maneuverability. They excel as interceptors and attacking capital ships as well. This fighter bests other designs such as the Crossfire and Predator. 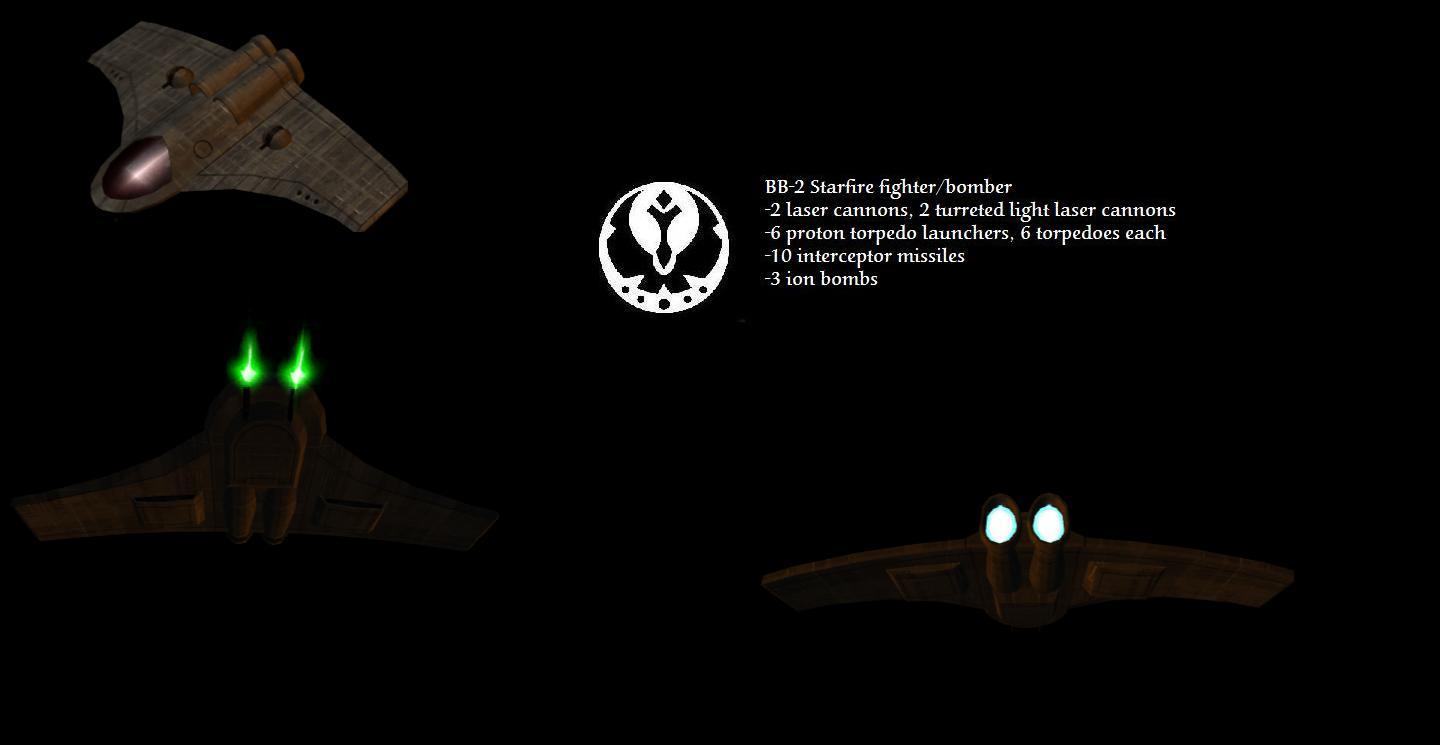 Physical Characteristics: The BB-2 is a sleek, gently curved starfighter made by SoroSuub Corporation. Though not as maneuverable as the Alliance's Crossfire, the Starfire's pair of massive engines provides it with the same speed. It has a dual shield generator, and a 3 man crew. This bomber is extremely well armed, comparable to the K-Wing, and has a massive amount of warheads.

Role: The BB-2 is an incredibly well armed bomber, with a massive weapons load out. Its primary role is to barrage missile/torpedo attacks on capital ships and stations. 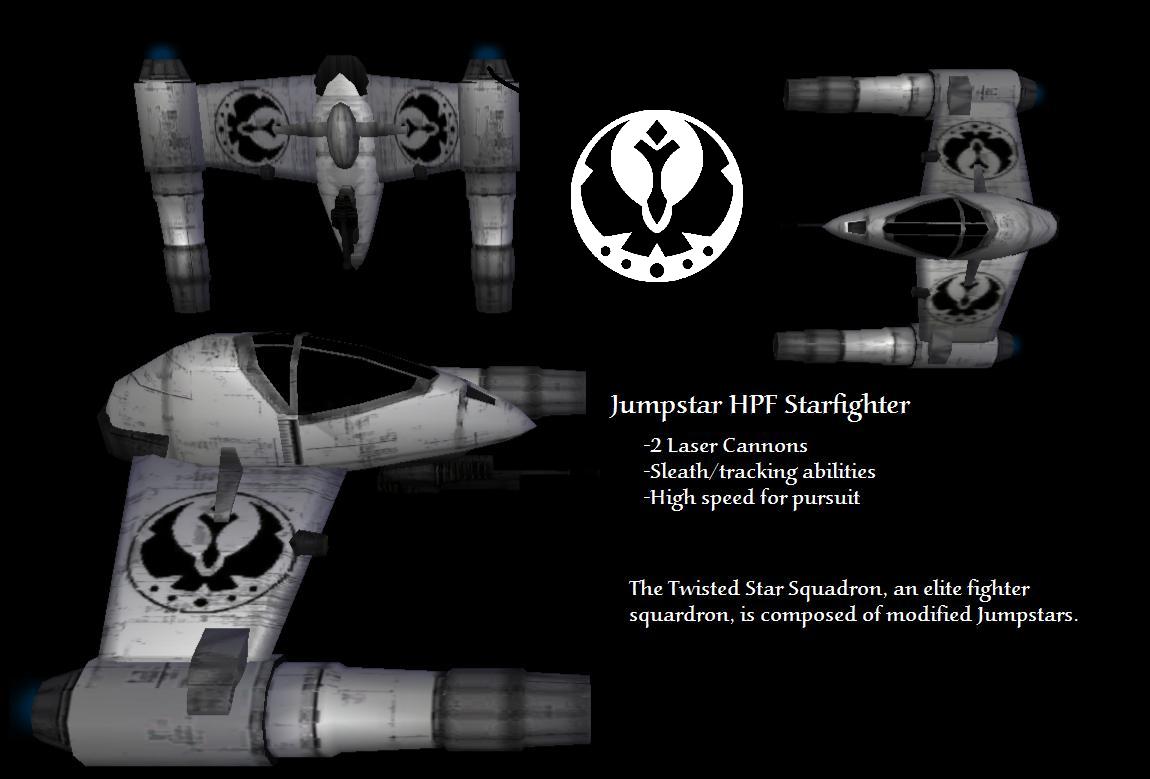 Physical Characteristics: The Jumpstar HPF (hyperspace pursuit fighter) looks nearly identical to the A-9 Interceptor produced by KDY. Its pair of advanced engines and specialized regenerating shields allow the Jumpstar to match many other starfighters of the time, though it is outpaced by the best interceptors. It comes equipped with advanced systems to pursue craft (and obviously has a hyperdrive).

Armament: 2 Laser cannons, 8 Marker missiles (yet to determine how to work these in)

Role: The Jumpstar can serve as a standard starfighter, though its specialized role is as a tracking vessel. Its missiles are not designed to destroy an enemy craft, but rather attach a homing beacon that allows a Jumpstar to track its target. 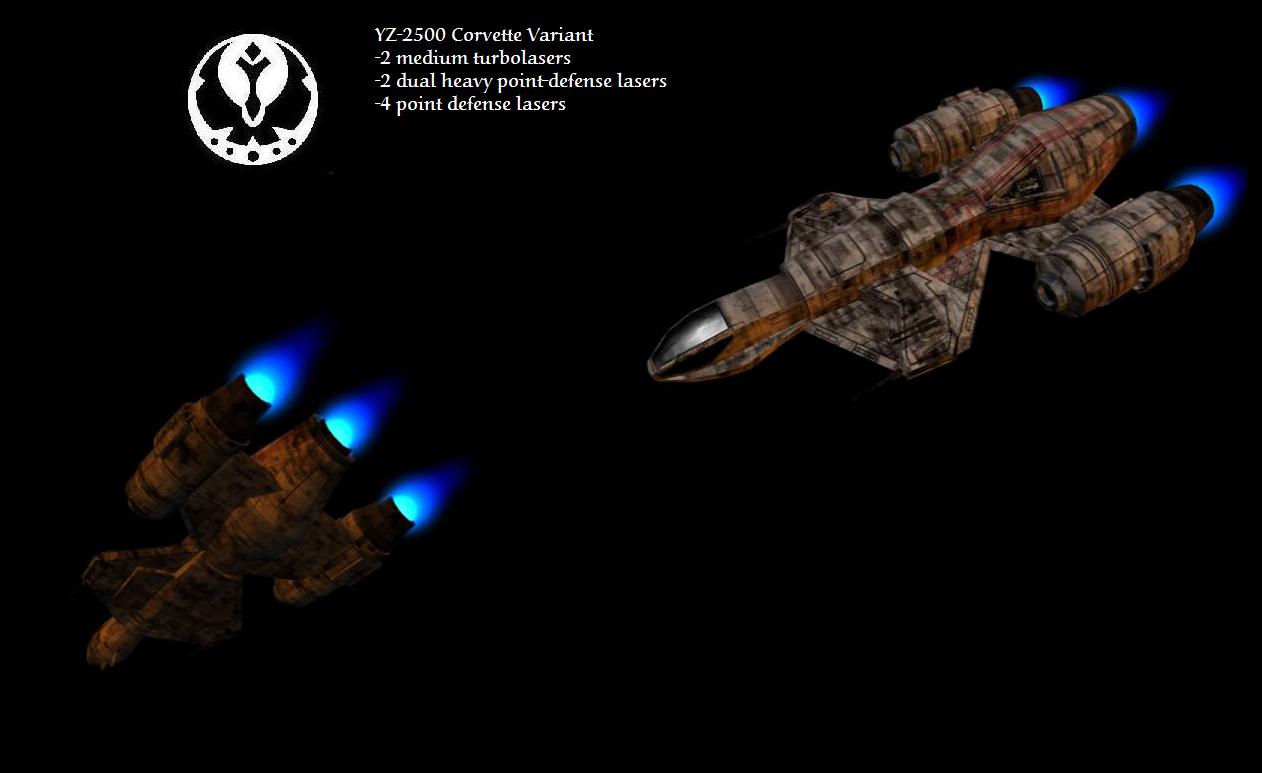 Physical Characteristics: The 2500 is a design reminiscent of previous eras of Corellian shipbuilding, with elements similar to the Consular-class and DP20 frigate. It is one of the largest space transports available on the market; some of those bought by the Alliance have been upgraded to a corvette.

Role: Like the usual corvette, it serves to destroy incoming fighters and bombers to protect larger capital ships. It can also engage in combat with other corvettes with its larger weaponry. 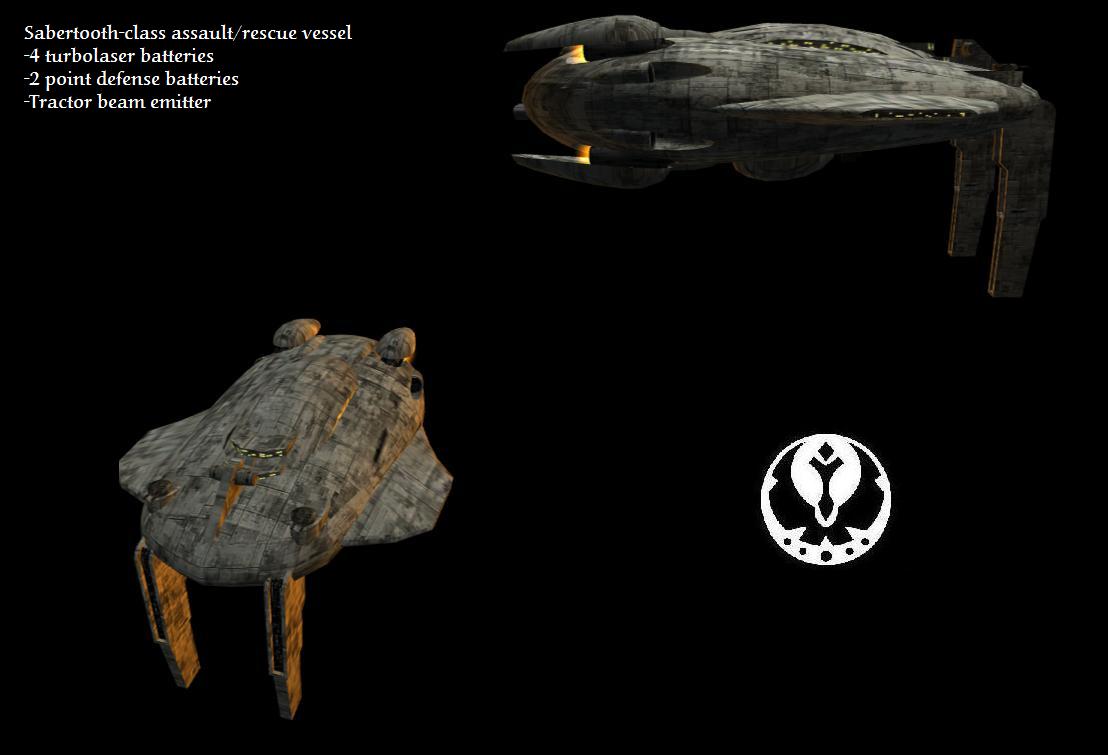 Physical Characteristics: Produced by the Mon Calamari, the Sabertooth-class assault/rescue vessel is equipped with two large and flexible grapple-"teeth", which are heavily reinforced and adjust to almost any damage. The ship is equipped with powerful engines, and reinforced with a superstructure that absorbs enemy fire and allows the ship to survive collisions with little to no damage.

Role: Its close-range grappling systems enable the Sabertooth to latch onto enemy ships, dislodging Venom assault squads, or a damaged friendly ship, moving it out of the battlefield or rescuing its crew (How, or if, this will be implemented in the mod is yet to be determined). 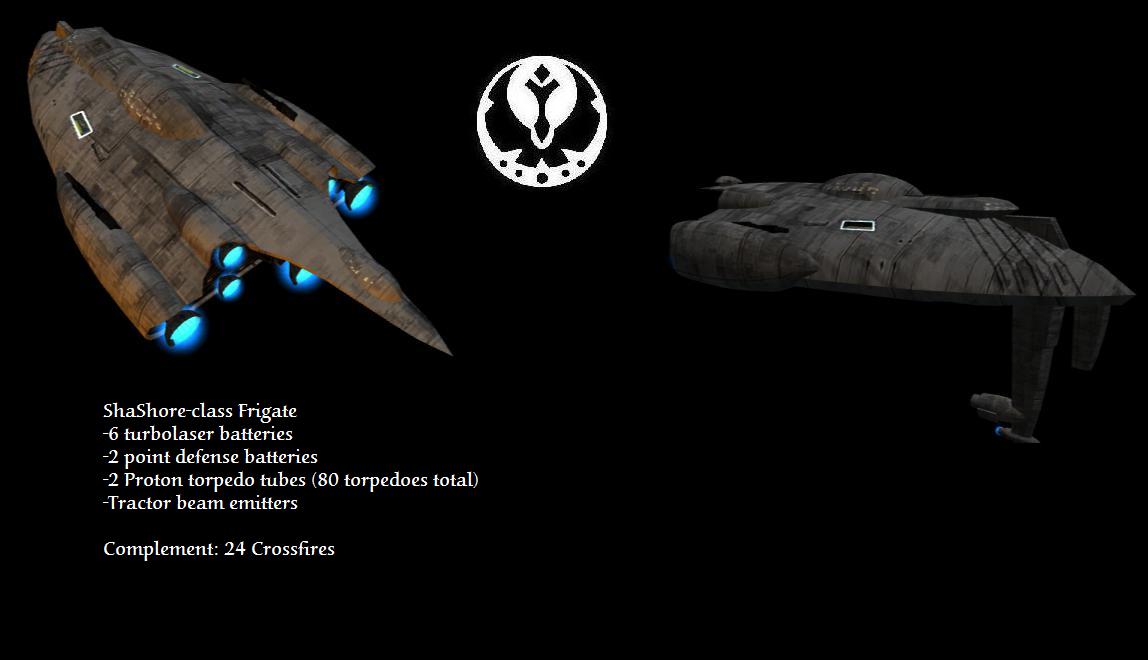 Physical Characteristics: Produced by the Mon Calamari, the ShaShore-class is designed with a large, blade-like structure centered on the ventral section of the ship's bow. In its standard armament configuration, the ShaShore is equipped with multiple turbolaser batteries, point-defense laser cannons, and a pair of proton torpedo batteries. It also has port and starboard hangars which can carry fighters and shuttles. A smaller blade positioned directly in front of the main blade is designed to carry one of several specialized modules, ranging from barrage-style concussion missile launchers, to an advanced sensor suite or communication jammers (yet to be implemented in the mod due to the lack of such models).

Role: The ShaShore-class frigate is designed for greater speeds and maneuverability, at the cost of less armor. It is more powerful than the Sabertooth-class. ShaShore frigates often are deployed as escorts for Scythe-class battle cruisers. It is capable of being augmented to numerous other secondary roles. 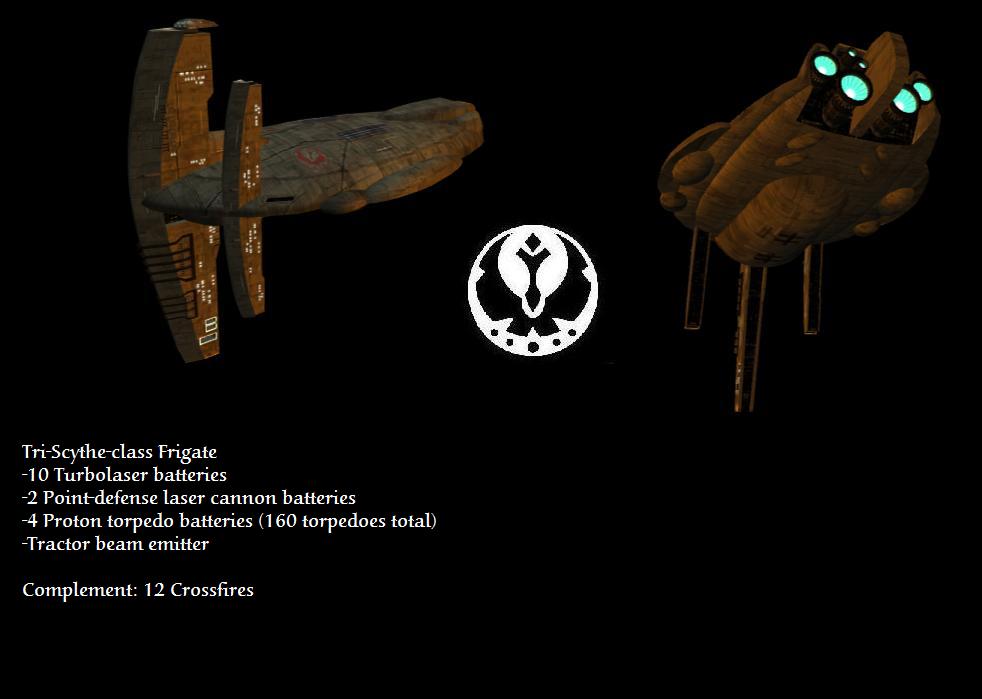 Physical Characteristics: Produced by the Mon Calamari, the Tri-Scythe-class is based on the Scythe-class, but has three blade-like structures instead of the single one featured on regular battle cruisers of the line. It is also larger and bulkier than contemporary Alliance frigates like the ShaShore-class, due to the increased amount of reactors and power generators needed to feed the weapons-batteries on the three forward blade-structures. The ship is less maneuverable than the other frigates, and the Tri-Scythe can be outflanked by enemy ships targeting its sides and rear. It has fewer weapons than the Scythe-class, but more than the ShaShore-class.

Role: The Tri-Scythe serves as a heavy frigate. It makes for a less expensive version of the Scythe, though less powerful. 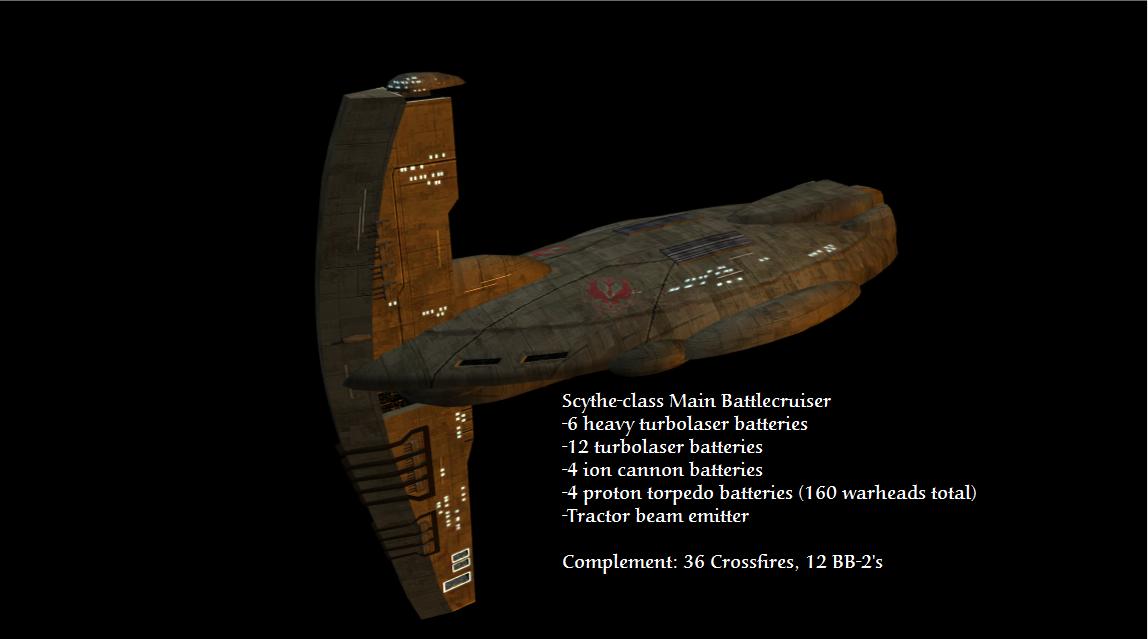 Physical Characteristics: The Scythe-class is a mass-produced, standardized design, unlike prior generations of the Mon Calamari Star Cruiser. The name comes from the massive vertical blade centered on the bow of the warship. The Scythe-class is heavily armed with advanced weaponry; the majority of the weapon batteries are mounted on the forward blade. This configuration is referred to as the "cross of fire" which proves to be deadly to almost any warship that falls into its crosshairs, although this provides some drawbacks. The heavy concentration of weapons batteries on the forward hull means that there is limited weaponry on the ship's broadsides and stern, which are susceptible to enemy fire. Several hangars are located in the forward blade.

Role: The Scythe-class is capable of engaging Pellaeon-class Star Destroyer in direct combat and winning. The Scythe-class utilizes its powerful engines to maneuver into a position where it could bring the "cross of fire" weapons batteries to bear on an enemy vessel. This massive barrage of turbolaser, ion cannon, and torpedo fire is capable of destroying larger vessels. 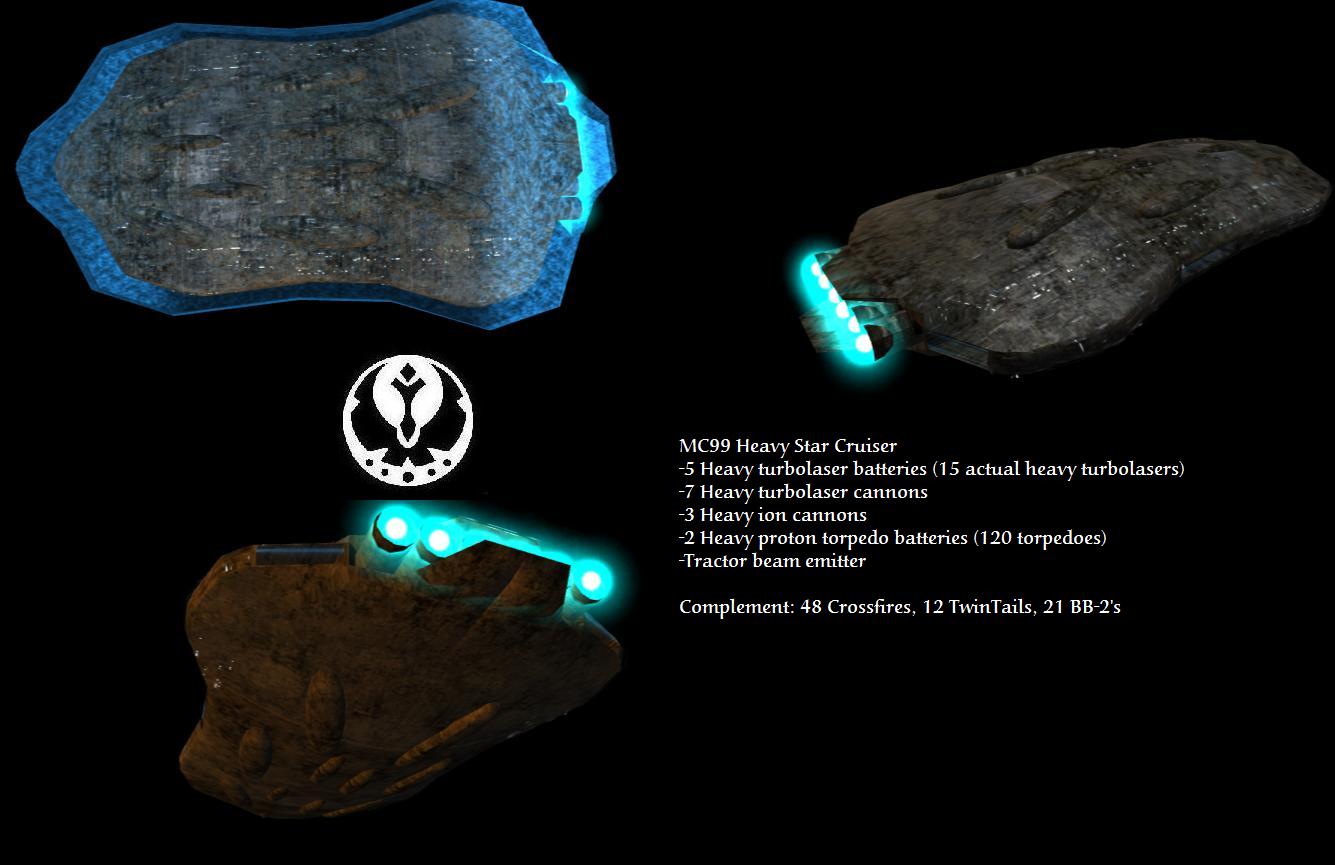 Physical Characteristics: The MC99 follows design patterns similar to those of the earlier cruisers of the Mon Calamari line. It is very organic and bulbous in shape, with its hangars located next to its array of engines and a pair on its port and starboard sides. It is very well shielded and armored, able to withstand many attacks and is exceptionally armed. This ship is larger than the Pellaeon and Scythe and considerably more powerful than both as well.

Role: The MC99 fulfills a role similar to that of the Mediator from the age of the New Republic. Essentially it is a battleship capable of taking on a whole small fleet of several frigates or a few Star Destroyers on its own, along with its fighter complement. It can fire in a complete circle around itself and does not have much in the way of a blind spot. This heavy-hitter is a great asset to the Alliance Remnant.

So that is everything for this week. Expect more soon!

cant wait to use the mc99

i can only say nice work and wow

sooooooooo how long till the next version/patch/addon??

Sometime during this summer, either July or August, but the full version won't be out for at least a month or more unless something major happens.