A progress update, including new screenshots, for the horror adventure mod The Apocalypse.

I’d like to give everybody an update on the progress of The Apocalypse, my upcoming horror single-player mod. As part of the update, I’d like to share some WIP screenshots. I am aware they’re all very dark. The mod is as a whole a very dark mod – indeed, it uses the dark as a gameplay mechanism, so the screenshot situation is somewhat unavoidable.

Thankfully, the mod is progressing very well. We had a music composer Shadrick Beechem come on board to help us create an eerie soundtrack. A horror game relies on sound design and music even more than other games do, so it was important that we get a talented composer on board to help. I’m happy to say the soundtrack has been completed and I’m very happy with it. Thanks to Shadrick for his hard work and professionalism. 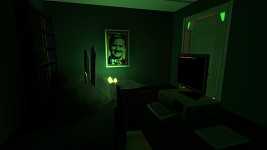 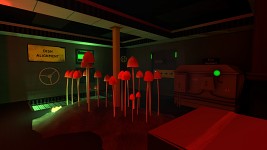 The first pass of the level design stage is almost complete. This is easily the most time-consuming part of the mod. Where once level design consisted of mostly brush work and a little bit of model placement in Hammer, these days it’s an intense mix – almost evenly split – of brush and model work. With each mod I’ve developed, the ratio of models to brushes has changed dramatically. This is despite Source 1 being very much a brush based engine. I’m fairly happy with both the layout and visual style of the levels so far – mixing the clean aesthetic I grew to love while developing Lunar Descent with a dark horror game feels somewhat novel, but I think it’s working well enough.

The Apocalypse will be my sixth Half-Life 2 mod. My ambitions for it are actually fairly modest. When Lunar Descent came out in 2017, I was very disappointed with the muted reaction it received, especially given that the development process for LD was prolonged and fraught with difficulty. In hindsight, I see that the mistake was in setting my expectations too highly. There’s nothing wrong with being a hobbyist with a small core of fans. For Apocalypse, I really only want to achieve two things:

In trying to meet the second point, I’ve put a lot of effort into world building. Those who invested themselves in the universe created in Dissolution and Lunar Descent will find plenty more to discover in this mod.

The one risk in this department is the fact that Apocalypse is a very different kind of game to the aforementioned mods – it isn’t a combat shooter, as they were, but rather an adventure game with enemy avoidance segments. Hopefully this isn’t too alienating to fans.

I’m considering releasing an optional version or feature toggle, as Frictional Games did their own horror games, that tones the enemy avoidance down or removes it altogether, so that people who aren’t fans of these kinds of games can still enjoy the story and world building. 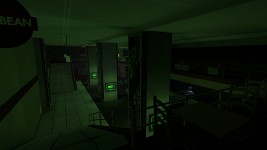 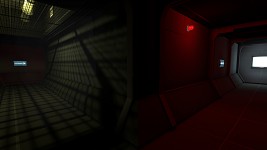 I’m still aiming for a 2022 release for The Apocalypse, and Q1 doesn’t seem unlikely. Players can expect a small single-player adventure game campaign, mixing inventory-system-based puzzle solving and enemy avoidance, with a strong focus on environmental design and story telling.

As ever, feedback is very much appreciated. And before anybody asks – no, the mushrooms are not edible!

Hey take all the time you need we have a lot of games/mods to play in that time.

Now this is some exciting stuff 😮 keep up the good work, looking forward to recording this when it's done 😁👍

I enjoyed watching your Lunar Descent videos, so can't wait to see you take this one on!

Man, you have some old-school doitall videos under your belt, I'm impressed! Thanks for watching! 😁👍

Edit: after rewatching those videos once more... Oh boy, they're bad 🤣 I think I used an older version of Camtasia (8.0?), it didn't agree with long video clips. And that audio, oh boy 🤦‍♂️ that's what happens when I didn't configure my audio setting. Don't worry, I've gotten much better since then! That cracked me up though, thanks for reminding me of those ones 😂

Goodness, I hadn't realised it was so long ago. Time is going so quickly these days. :)

Really excited to see this