It is high-time for the next update of our project, and this time we prepared various news for you at one stroke, so stay with us.

It is high-time for the next update of our project, and this time we prepared various news for you at one stroke, so stay with us.

NEW CONSTRUCTIONS OF THE HARKONNEN HOUSE

This construction is used for keeping vitally necessary water, especially if taking into account the conditions of Arrakian desert. It can be equipped with defensive turrets.

And now, for the first time we catch up a curtain above the faction of House Atreides, and today we are going to present you three units of this House: 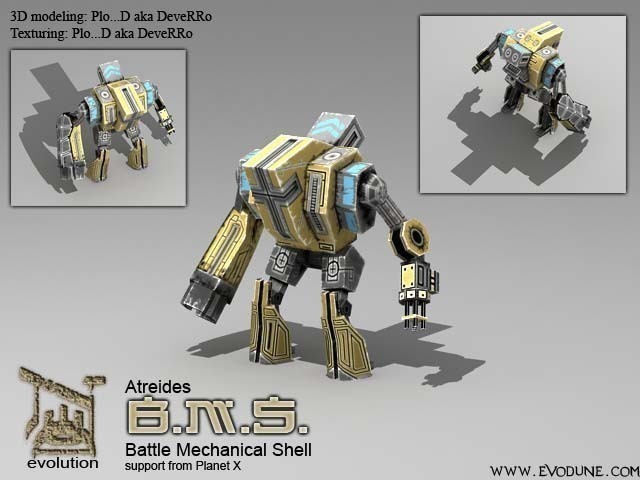 It is one of those fighting units, which were created by the Ixians as a gift to the House Atreides, immediately after invasion of Arrakis. It was done in order to blandish the lords of the most precious planet of the whole empire.

This Shell was created specially for fedaykins, and only because of their battle skills and double-quick reaction they are able to drive it, and even at that, this machine becomes a fully-featured weapon only after lasting training, that is why such kind of equipment is used rather seldom. To the battle equipments of this unit belong also a powered glove for destruction of tank armour and a shotgun, which helps to saturate enemy troops, not allowing them to draw closer over the near distance. Besides, rather powerful hydraulics of the Shell allows it to conduct large jumps, with the help of which, if required, it can move fast.

The infantry have always been the main force of the House Atreides, but not the machinery, especially now, when the fremens joined them; that is why there exist an acute need of quick displacing of forces. So it is the main function of transporter, besides, it contains a medical section in its configuration, and a medic is included to the crew as a compulsive member, in order to be able to deliver medical care.

It is the most powerful and the most legendary battle unit of the House Atreides, and with the help of its artillery weapon Minotaur is able to put to complete rout any of the enemy's fortifications.

It is well-known that graphical component of the game is by no means all and in order to fully involve a player into atmosphere of the game, it is necessary to move into all directions, one of which is the most important - musical score.

We were lucky to contact a prominent composer Frank Klepacki, who wrote music for the Dune games from Westwood. We begged a permission from him to apply his musicin our modification, so here is his answer:

"I got no problem with it Glad you guys love the dune stuff, and good luck with your mod!

We are very thankful to Leonte Radu aka anistar for setting this point.

And if you are from the other planet and have never heard nothing about Frank Klepacki, so you can hear one of his tracks, written specially for RTS - DUNE 2000, below:


It is not the end , not long ago our team joined one very talented composer from France, Loren Sieghart aka Hologard.

His first work in the frames of our project was writing of the track specially for ijntroductory teaser (it is in the phase of development right now), he cope with this task just de luxe, and now you can prove it by yourself:


Loren Sieghart - Thru Pain to the Death
D:E LIBRARY
So, to this end we present you the latest story, created on the base of Dune universe.

Besides, the events, described in this story take place on the base of the first mission from our company, which we are preparing for you in the frames of Dune: Evolution.

- Stop! - cried his inner voice and his revolting stomach.
- Stop! - cried his naive principles and the rules of survival of his people.
- Stop!!! - Tamish shouted at himself, losing his voice, but all he heard was the chaos around him.
Vehicles went around through passable streets, but the Fremen infantry went straight forward. They broke their way through narrow streets, they went through the houses and left only dead bodies behind. The Fremen revelled into their revenge, colouring the streets of Carthag into maroon shades. Something incredible was happening around - women, children or soldiers, in this city they were all the same, everyone who remained in this city deserved to die... This city was the capital of House Harkonnen on Arrakis, and here they would feel everything they had done…
He remembered his native sietch all the time… when it was found by the Harkonnen… Tamish remembered his mother, raped and murdered, he remembered his father, cornered and torn apart, he remembered his friends… they were all dead! And what about him? He was hiding - coward!!!
He fancied many times, how he would avenge, how he would make them regret, but how could one stand without doubts when he saw a woman with a child hiding in a corner and a man in Harkonnen uniform defending them… The Fremen killed the whole families, without mercy, without hesitation…
- No! It is not a family!!! She betrayed her people, she was forced or bought… it doesn't matter, and the Harkonnen… he defended only himself. - Tamish tried to justify himself, clenching his crysknife so tightly that his fingers turned white...
He was just fourteen… a tear ran across his cheek... But the Fremen don't cry! And he wouldn't, he woouldn't be afraid again, he was not a child… already not.
Tamish gritted his teeth and ran faster, he needed to catch up with his squad, he promised that he wouldn't fall behind, that he wouldn't fail…

What was that!?
Turning round the corner, he saw his squad… four lifeless bodies covered in blood, even the fedaykin, and another body was lying close to him, in a bright and unfamiliar uniform - a Harkonnen trooper. Two others were standing above the body, and they had noticed him!
Surprised Tamish stumbled and fell down before them.
- Whelp! - one of the Harkonnen spoke through clenched teeth and then kicked him.
Tamish flew back, bending with pain, and fell down, trying not to scream:
- That's all, the time has come to pay for my foolishness, - he thought, while the rage of his weakness consumed him.
He tried to stand up, but he was forestalled, a hand caught him and he saw a twisted, grinning face of his enemy. The soldier uttered a hideous giggle and punched Tamish in the stomach again. With a free hand he took out a knife and…
Suddenly a silhouette flashed in the alley, and warm blood stained Tamish.
- Not my. That's not my blood! - Tamish sobbed in astonishment, seeing his executor coughing and collapsing to the ground.
The unexpected guest quickly approached the second Harkonnen and tried to hook his leg, but the soldier was ready, he dodges his attack and in his turn punched him in the guts.
Only then Tamish recognized a fedaykin in this twisted figure, his shoulders were not distinguished in his stillsuit, he was completely covered in blood.
The Harkonnen gripped the long tangled hair of the fedaykin and tried to hit him with his knife, but he blocked this attack and kicked him in the groin. The Harkonnen loosesed his grasp for a moment, but this small delay was enough for his opponent to snatch the knife and give it back to its owner, thrusting it into his side up to the handle. Then the fedaykin quickly dived, twisting his hand, and appeared behind the soldier. The Harkonnen shouted in pain, trying to free himself, but the fedaykin just pushed his hand, and then quickly smashed the crysknife into his head.
Tamish, like mesmerized, looked how the body of his enemy sliding on the wall. He still couldn't believe what had happened… everything happened so quickly… Death was just holding his throat and now…
Slightly shaking, Tamish tried to rise and to approach the fedaykin, but he was stopped:
- That's enough for you, go back!, - saying fedaykin, and disappeared in the shadowy lane.

P.S.: Those who are bored to look at our renders, concept arts and read our stories, for those who are interested to have a look at something directly from the game... - wait a little bit, please, and in our next full-featured update you will be able just to get an eyeful of some in-game moments.

now that what i call a fantastic full of win update ! great work =]

cool Minotaur, buildings also look nice. I think the Hydraulic catapult's animation should be slowed down a bit.

The Minotaur is awesome. :) I'm really glad you guys are going for a new look at style for this mod.

Any chance of being able to water-harvest killed infantry?

The water bunker looks great...
Talkin' 'bout water, it reminded me of something from the movie - the suits that recycle all body waste into drinkable water

"Any chance of being able to water-harvest killed infantry?"
something like that ;)

Everything, really everything in this update looks pretty amazing!