Hi everyone, added a bunch of information about the strategy side of our 2D shooter. Manage your bases and clear the planet from alien infestation!

When an alien hive is successfully cleared, it affects your ongoing planetary campaign! In this turn-based strategy mode, it’s up to you to decide where to strike next, what upgrades and weapons will guarantee your success, and where to build up defenses against the alien counter-attacks.

In this campaign mode, you will have to carefully balance your two available resources: Jumpers and Alien Goo. Alien goo is a powerful supply of bioelectric energy, and can be used to requisition new weapons, research upgrades, build fortifications, and request more Jumper reinforcements.

Some planetary campaigns will be more difficult than others. This is determined by the number and strength of hives, as well as the quantity of resources given at the beginning of the campaign. 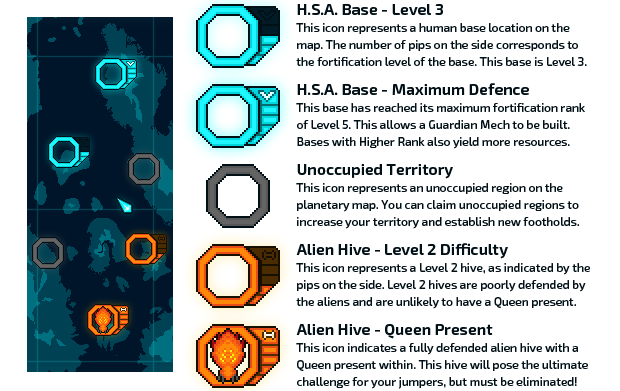 The planetary campaign is only complete once all the alien hives on the map have been eradicated. Human bases are represented in cyan, while alien hives are color-coded orange. Grey areas indicate an unoccupied territory that is ripe for conquest by either the humans or the aliens.

On a human turn, players will be able to manage and upgrade their bases, as well as scout out a new alien hive to attack. Players can only JUMP one hive per turn, unless they have earned a bonus ability from successfully clearing a Hive that says otherwise.

Choosing which hive to JUMP next is very important, so players have a variety of tools at their disposal. Gathering intel about a hive is helpful, and players can even spend resources to bombard a hive in order to reduce its fortification level, making it easier to JUMP.

A successful JUMP will replace an alien hive with a human base! It will also grant the player a large amount of resources, as well as a random bonus ability to use at will. Bonus abilities are one-use items that can have effects like: Fully Fortify a Human Base, Take Another Attack Phase, Revive Slain Jumpers from this turn, etc...

After each JUMP, the aliens will have a turn to retaliate. The aliens can expand to new territory, fortify their hives, and launch attacks on your bases. It’s up to you to make sure they don’t succeed!