Today we released the Strategic Mind: Fight for Freedom for all the wargames' fans and all the people, who always wanted to try this genre of games. We tried to make it understandable and challenging at the same time

Hello guys! Today we released our turn-based strategy - Strategic Mind: Fight for Freedom on Steam. Our dev team is both happy and exhausted as we were working really hard to deliver players the best game we could.

Strategic Mind: Fight for Freedom is a history-driven turn-based strategy set in WW2. Take command of the Allied forces and protect your homeland and the whole of Europe from totalitarian madness.

Go to the Strategic Mind: Fight for Freedom page on Steam.

We released the Strategic Mind: Fight for Freedom for all the wargames' fans and all the people, who always wanted to try this genre of games. We tried to make it understandable and challenging at the same time

Two campaigns, two Generals. Take on the roles of Harold Alexander in the British campaign and Dwight Eisenhower in the US one.

Real and alternate history. Play the fully historical British campaign (1939-1944). Then play the US campaign starting with Normandy landings up to war in Europe. Then continue playing it in the alternate history timeline of 1946 where Allies go to war with the USSR, due to disputes over the fate of Poland and USSR’s atomic weapon program. 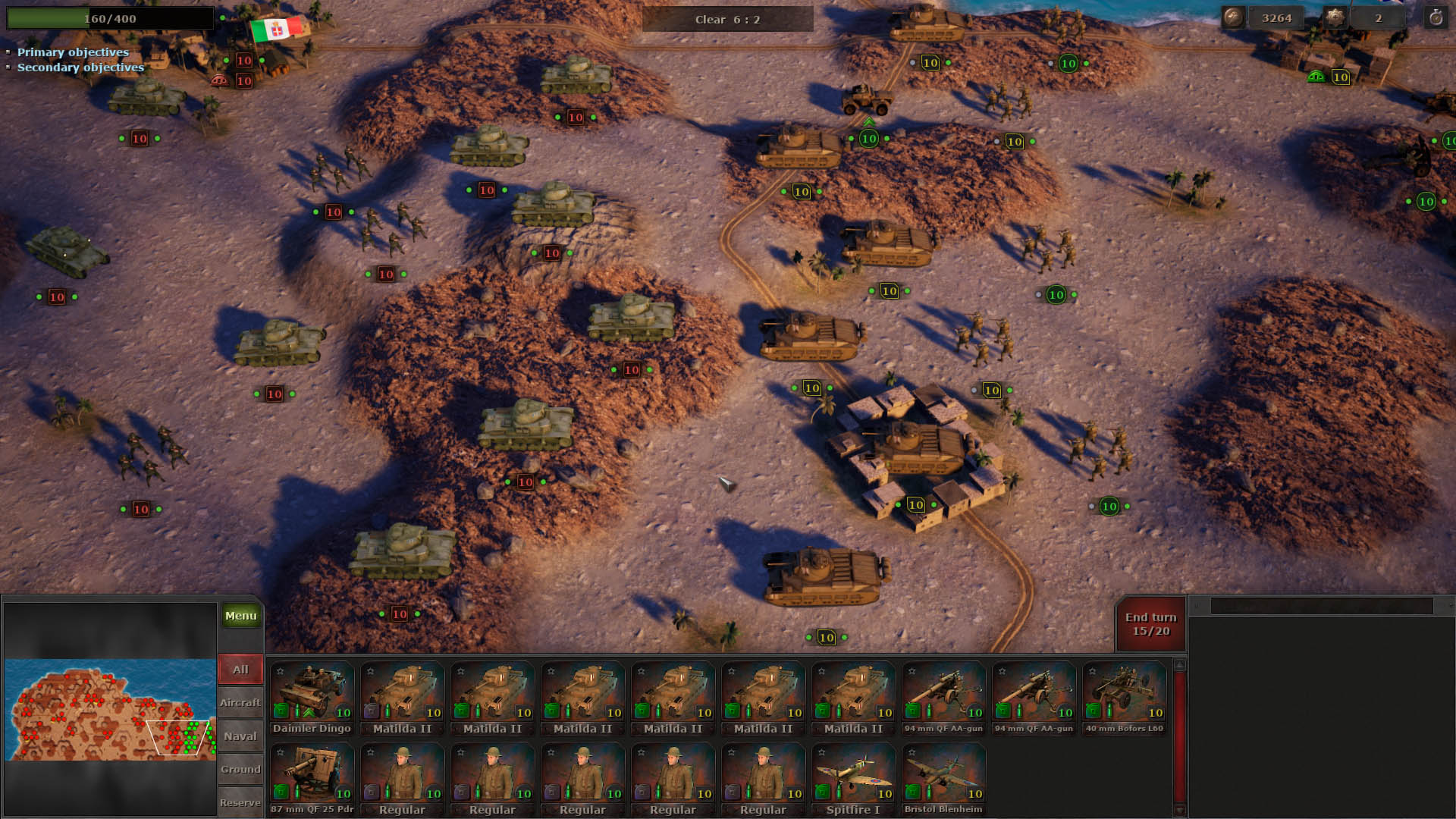 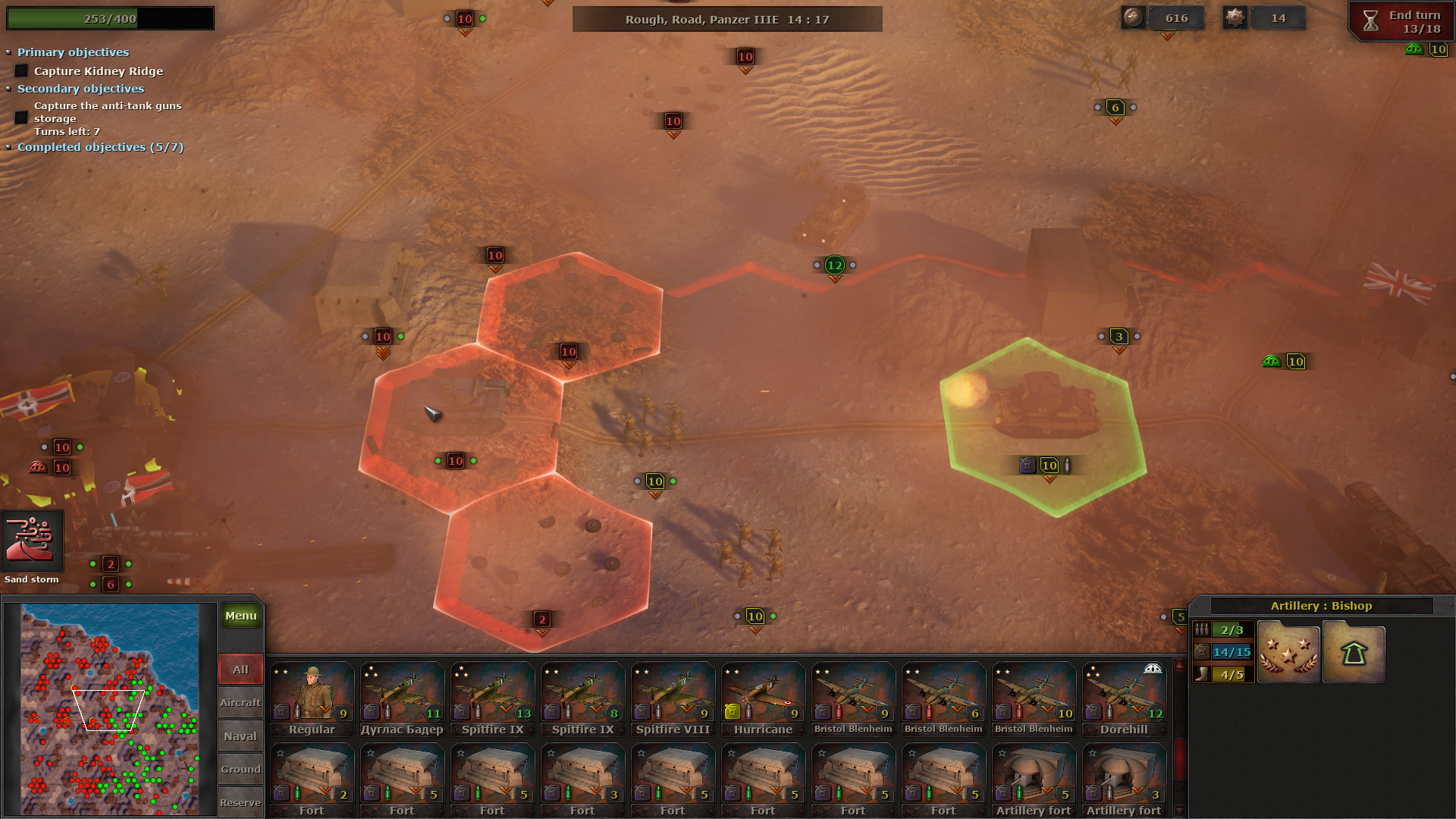 Top-notch tactics. Choose the best position for your units to maximize terrain advantage, make the best use of headquarters skills, and provide your troops with the most fitting equipment for the coming battle. For instance, tanks with the trophy night vision devices would be much more effective during the night operations. 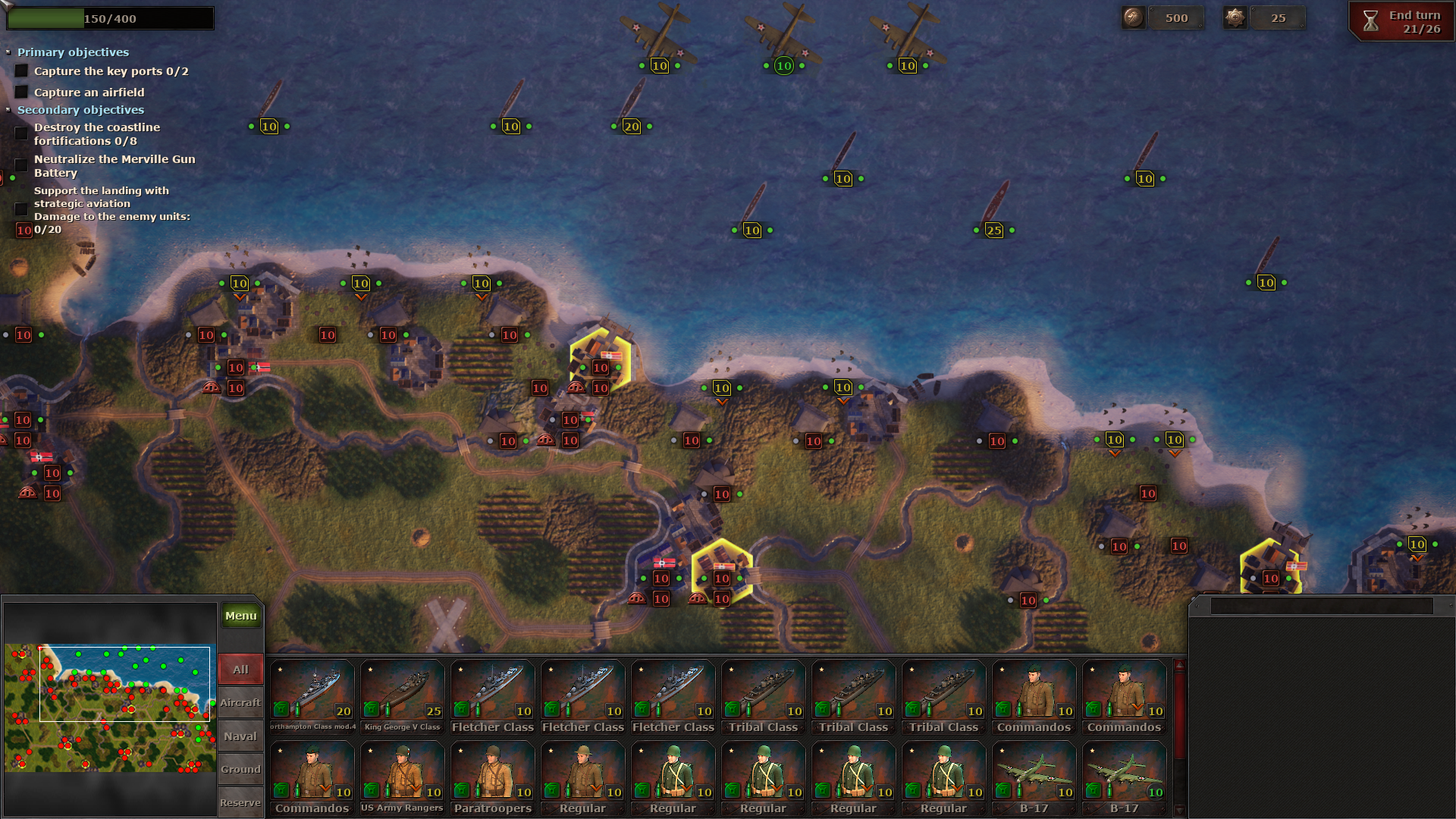 Combined arms. The game features all three branches of the armed forces: the Army, the Air Force and the Navy. All unit models are accurate replicas of historic WW2 units and appear at correct historic periods. The Navy has light ships - destroyers, heavy ships - battleships and cruisers, aircraft carriers, submarines and carrier-based aircraft. The Army has infantry, tanks, artillery, AA-guns, AT-guns, Recon squads, assault guns and even armored trains. The Air Force has fighters, tactical and strategic bombers of various models. In short - we have everything that fought in WW2. 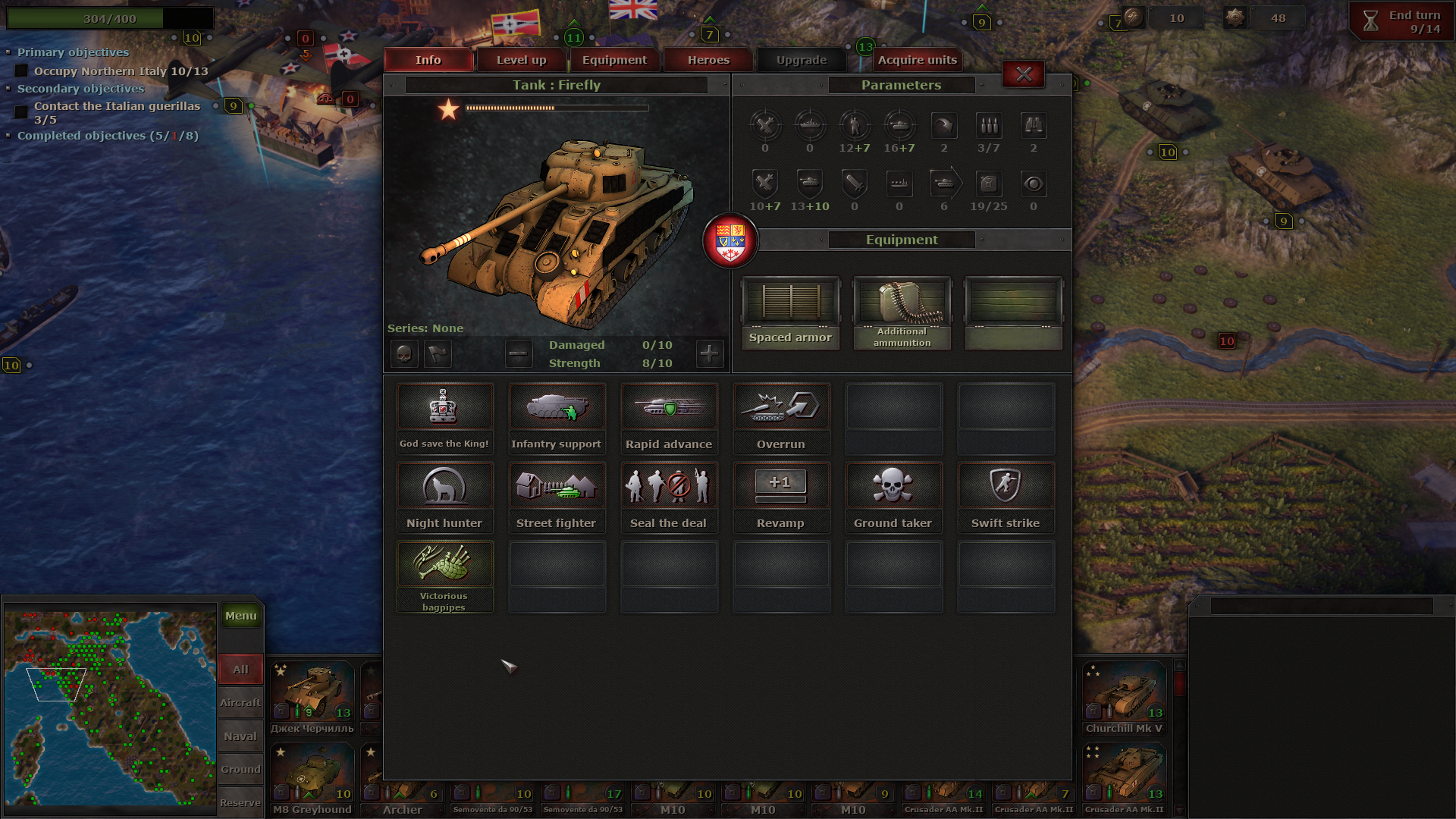 To each a personal headquarters. After each operation you will be managing your HQ: acquire new units and upgrade them to newer models. You can also provide them with extra equipment and transport, level them up and assign heroes to them. Moreover, there are other Generals in the HQ that will share their thoughts about the upcoming battle. 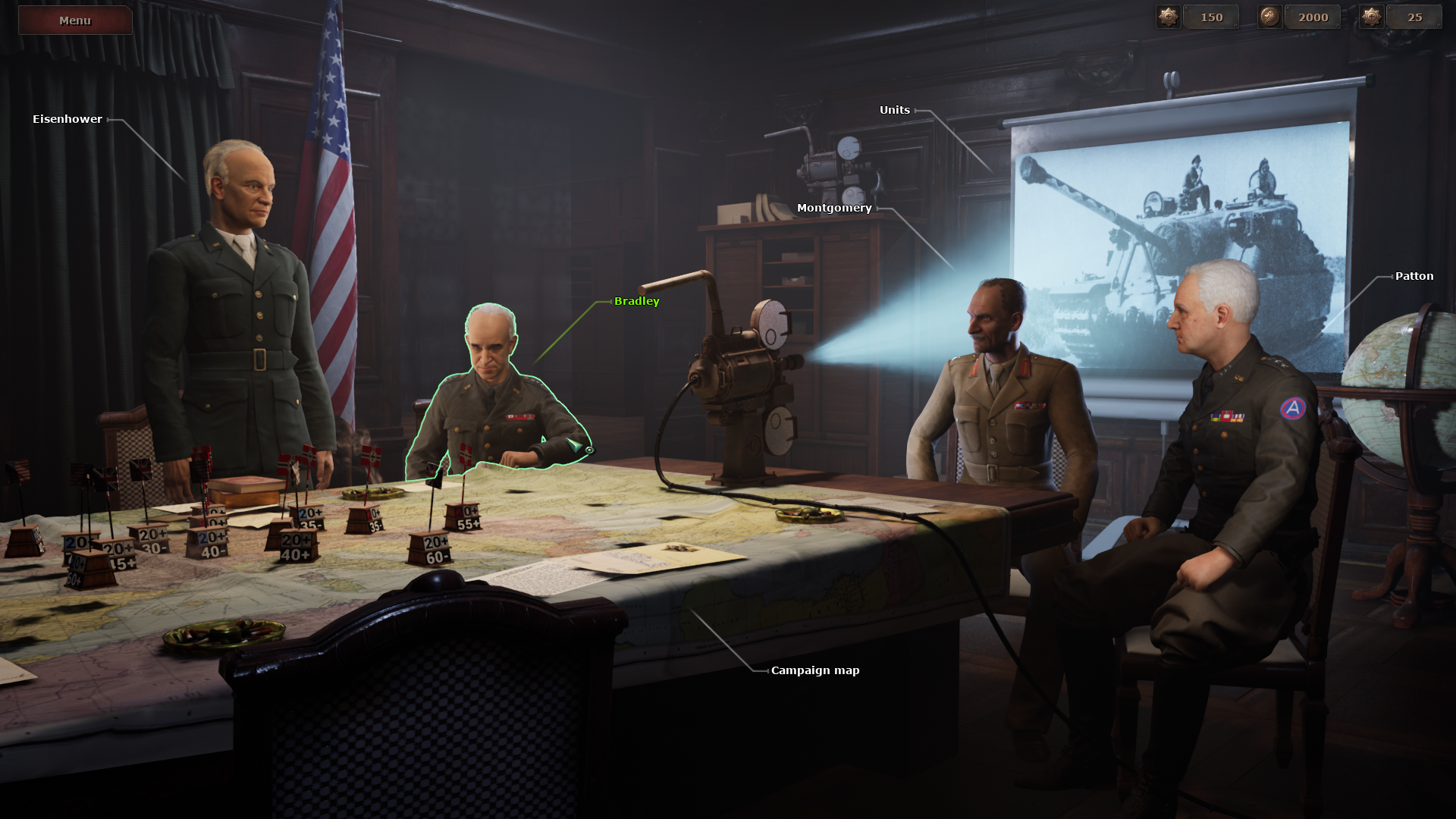 Through your character eyes. Watch over 70 minutes of cinematics with battles and character interactions between historical figures such as: Winston Churchill, Bernard Montgomery, Harold Alexander, Franklin Roosevelt, Dwight Eisenhower, George Patton and others. 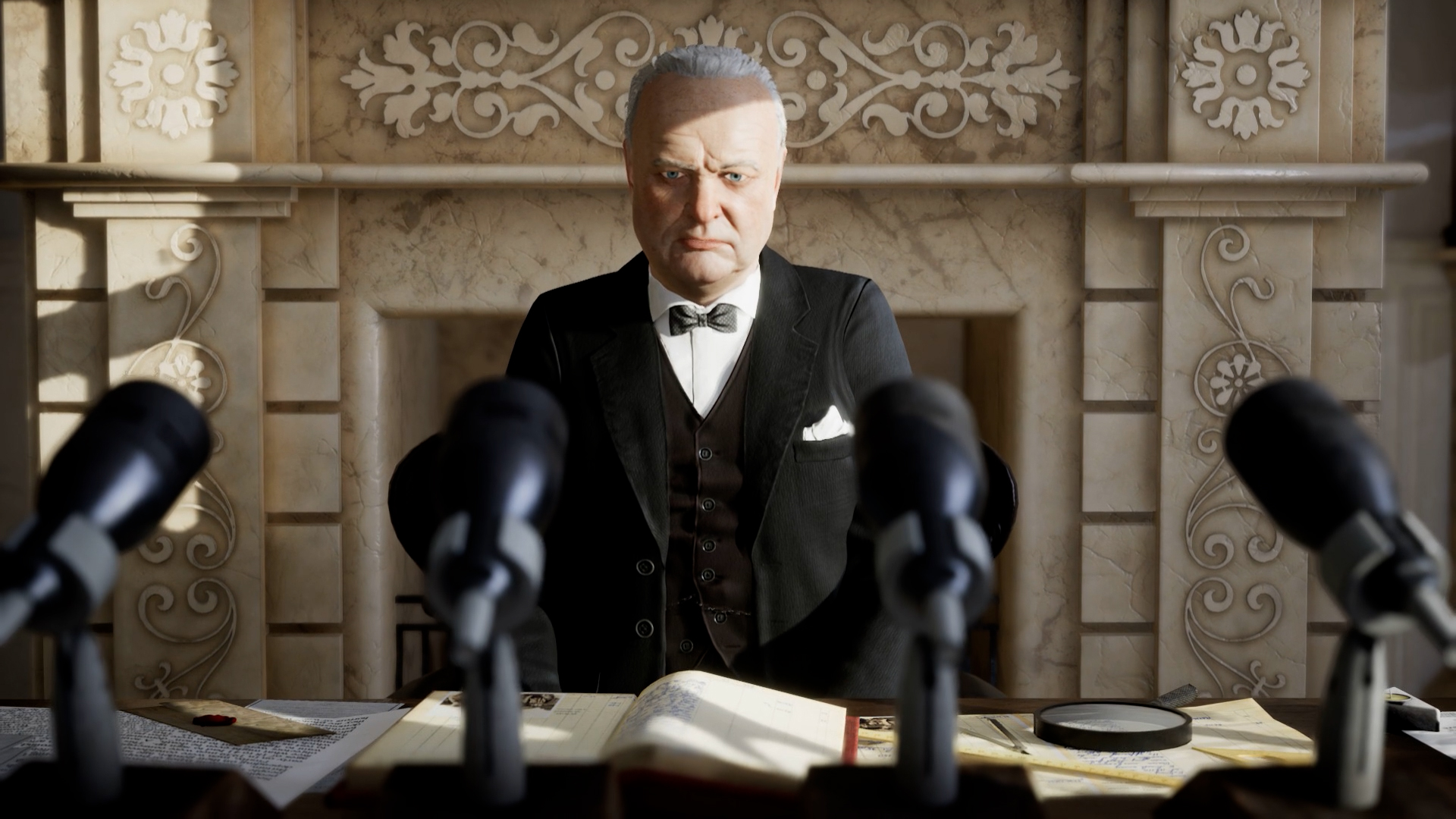