(Updated again to fix shortcut to be relative, if you have the old version and don't want to redownload, please just go to the binaries directory and launch Storyteller.exe directly.) 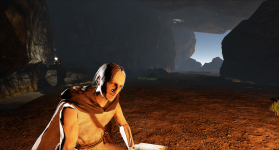 When I released the alpha for Storyteller, I did not yet have my Oculus Rift DK2 in hand to test it on, and so was just going off of impressions. When I finally did receive the Rift and tried the demo out, it was a smeary black mess. The OLED panel the Rift (DK2) has comes with an issue with pure-black areas and the border regions between them and colors which aren't entirely black, which causes the black areas to smear outwards.

The menu system didn't work unless you were looking 45 degrees to the left of the actual spot, which wasn't what was happening on monitor, of course.

Performance was also a dog, for various reasons that I'll go into and that have helped Dungeon Survival go from 50fps in a very small scene to being fast enough to play on the DK2 with no judder at all.

In addition to all that I went through and rearranged the level slightly so that you're sitting closer to the creepy storyteller hermit, as before it was far enough out that you didn't have anything interesting in the near field to actually look at. Now you can get a nice view of the distant sky, including circling birds. Fog has also been increased some.

I wanted to include light rays but it unfortunately does not work correctly in stereo.

As to the performance issue, many things were set to cast shadows, have gravity, have collision etc., all of which combined to be tanking down the performance.

* Changed level layout significantly to put more interesting things into the near field (player now sits close to the storyteller).
* Increased exp height fog.
* Enhanced lighting greatly to give a lot more variation in color palette, for a brighter but still cave-like feel.
* Added particle light to campfire.
* Fixed menu system (hit Escape to bring up the menu).
* Changed bookmark keybind to Numpad 0, and changed Enter and R to also reset HMD orientation/position (in addition to the normal F1).
* Changed interact time on books to be 2.5s - many users were having issues at 4s. Look at a book to select.
* Fixed many performance issues.

Get the Storyteller: Fireside Tales Beta 1:

From IndieDB
From MediaFire

In Dungeon Survival news, I've combed through the project and fixed those same issues which were affecting Storyteller's performance.

Recently I've been experimenting with getting the destructible oil barrel integrated with the normal pickup/throw system, though it appears it will require more work to function totally correctly.

In the mean time I'll be hooking up the Razer Hydras for hand control.

Now that Storyteller has a proper demo I feel I can dedicate more time to working on Dungeon Survival.